Schloss Thun, an authentic medieval castle, towers over the old town high above the Aare River and the Thuner See. 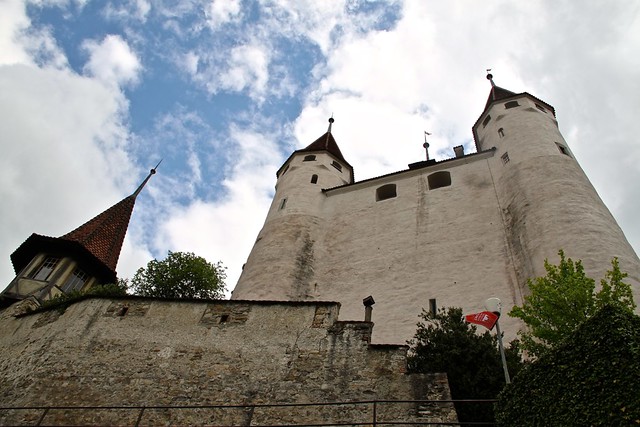 Visiting Schloss Thun is fun. Visiting the castle requires more of a physical than mental workout with many stairs, prime views, and only a few exhibitions. The white, square castle dates from the late twelfth century and towers over the old town and Lake Thun allowing for excellent views from the four corner turrets. A major sight in Thun castle museum is the Burgundian heraldic tapestry captured in 1476.

The square Romanesque donjon of Thun Castle with its emblematic four corner turrets date back to 1196 and the times of Count Berchtold V of Zähringen. (The Zähringen family is important in Swiss and Southern German history of the 12th and 13th centuries with important contributions in several cities including Bern, Freiburg, Friboug, Murten, and of course Thun.)

From 1384, the castle has been the residence of the representatives of Bern. From the nineteenth century, it housed the local history museum. The adjacent new castle (Neues Schloss) dates from 1429 and is presently being renovated. It was used as a regional court up to 2011.

The medieval donjon of Thun Castle has impressive walls – they are roughly 4 m thick up to the level of the knights’ hall, where visitors enter the castle. The Knights Hall itself is an impressive 19 x 12.5 x 7.5 m. The pine roof beams are the originals while the floor was replaced in the mid-twentieth century using medieval techniques and materials.

Schloss Thun is a medieval castle located high on a hill to control routes following the outflow of the Aare River from Lake Thun towards Bern. The tagline of the museum is “Top of Thun” and it should therefore come as little surprise that visiting the castle requires a bit of physical effort. Getting to the castle generally requires scaling a lot of stairs, except when approached from behind where a very small parking lot occasionally has empty spaces.

Once at the castle, visitors have to scale an external but covered staircase from the ticket office to the donjon entrance at around third-floor level. From this large, mostly empty knights’ hall visitors can either ascent or descent two further flights of stairs to the towers or the basements. It doesn’t matter which parts are seen first.

On the first higher floor is an exhibition of daily life in Thun during the nineteenth century. Thun was an industrious area with tourism just beginning to develop. The exhibition here is easy to follow and to enjoy without having to go into too much detail.

One level up is probably the highlight of visiting Schloss Thun: from here all four corner towers may be entered for magnificent views of Thun, the lake, and several Alpine peaks.

Going down from the knights’ hall are two floors with exhibitions – mainly majolica ware. However, the cultural-historic highlight on display in the museum is the Burgundian Heraldic Tapestry.

The Swiss famously defeated the Duke of Burgundy at the battles of Grandson and Murten (Morat) in 1476. At this stage, Burgundy was one of the strongest forces in Europe and challenging the King of France for supremacy in the French-speaking world.

The Burgundians fled leaving behind the fabulously opulent Burgundian treasure. However, as the museum in the Chateau de Grandson frankly admits, the Swiss soldiers were mostly country bumpkins with no idea of the value of the Burgundian loot. Items were spread throughout Switzerland and often sold at below value.

The History Museum in Bern has a fine display but Thun has the Burgundian Heraldic tapestry. Up to 1883, this huge tapestry, cut into four pieces, was used in winter in windowsills to keep the drafts out before it was recognized again as being of major historical importance.

Tickets are sold at the base of the donjon and are CHF10 for adults and CHF3 for children over 6. Family tickets are CHF20. The Swiss Museum Pass is valid.

A small snack shop operates at the ticket window but many more restaurants and cafés are scattered through the nearby old town of Thun.

The castle is totally unsuitable for wheelchair users or strollers.

Two further Lake Thun castles absolutely worth seeing are the romantic Schloss Oberhofen just to the southeast of Thun and the historic Schloss Spiez on the southwestern bank of the lake halfway towards Interlaken.