Getting to Aéroport Nice-Côte d’Azur (NCE) from Monaco is fastest by helicopter, most comfortable by airport express bus, and cheapest by train or bus. Taxis and pre-booked airport shuttle van services are convenient for groups and families. Travel times from Nice-Côte d’Azur Airport (NCE) to Monaco without any waiting are: 7 minutes by helicopter, 45 minutes by Express Bus 110 or car, 50 minutes by train and bus, and up to two hours on regular buses.

Taxis from Nice-Côte d’Azur Airport (NCE) to Monaco is by the meter but should be around €90, making it a good alternative to the bus for small groups, families, or when traveling at odd hours. Pre-booked airport shuttles and limousines may work out slightly cheaper. Suntransfers gives online quotations for private airport transfers without first requiring personal details or flight numbers.

Around 70 daily scheduled (and more private) helicopter transfers speed travelers between Monaco and Nice-Côte d’Azur Airport (NCE). The seven-minute flight is definitely the fastest and most glamorous way to arrive in Monaco from Nice Airport.

Helicopter flights from Nice-Côte d’Azur Airport (NCE) to Monaco Heliport (MCM) cost around €160 per person on a scheduled flight with discounts for children, over-65s, and return flights. The helicopters arrived at the heliport in Fontvieille at the far western side of Monaco but usually include the road transfer to the final destination in Monaco.

Private flights, with up to five passengers, are just shy of €1000 for the transfer between Monaco and Nice-Côte d’Azur Airport (NCE).

Travelers on a budget should note that the Monaco to Nice flights are generally €10 cheaper than the other direction. During the Formula 1 Grand Prix weekend all prices go up.

By Train from Monaco to Nice-Côte d’Azur Airport (NCE)

Trains provide a fast and cheap alternative to the convenient Express Bus 110 when traveling between Monaco and Nice-Côte d’Azur Airport (NCE).

Since the opening of tram 2 in Nice, traveling to the airport by train via Nice-St Augustin station has become significantly simpler. From the station, it is a short walk to the Grand Arénas tram stop. Traveling on the tram from Grand Arénas to airport Terminal 1 and Terminal 2 is free for all.

Traveling time is just over half an hour and cost around €5 in second class.

While Terminal 1 is not in operation, buses only depart from Terminal 2 and services may be less frequent than stated below. The train remains a very good alternative.

Solo travelers may find Airport Xpress Bus 110 the most comfortable option when traveling between Monaco and Nice-Côte d’Azur Airport (NCE). The bus uses the highway with limited stops to reach Monaco in around 45 minutes with one bus per hour continuing all the way to Menton in 1h15.

Tickets for the Express bus 110 can be bought from the ticket window at the airport, the bus driver, or online. Seat reservations are not possible.

For travel outside these hours, use bus 100 from Nice-Le Port (dead slow but cheap at €1.50) or more sensibly the train.

The cheapest way to travel between Monaco and Nice-Côte d’Azur Airport (NCE) is by regular bus. From Monaco use bus 100 to Nice (€1.50) that runs around four times per hour. Traveling time is around an hour but could be significantly longer in heavy traffic. In Nice, transfer to tram 2 at Port Lympia.

Total travel time could be well over two hours and luggage is not very popular on these municipal buses. On bus 100, €1 is charged for a second piece of hand luggage and €5 for a suitcase — the train is cheaper.

Late at night, use the N100 NocTAM’bus night buses that depart from Parc Phoenix – a few tram stops from the airport. Traveling time from the airport at night is around 40 minutes to Monaco and just over an hour to Menton. 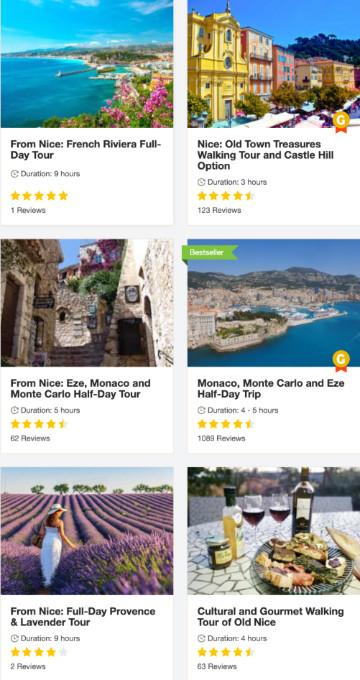