The Rheinfall near Schaffhausen on the Swiss-German border is Europe’s largest waterfalls and a popular day-trip destination from Zurich and Lake Constance. 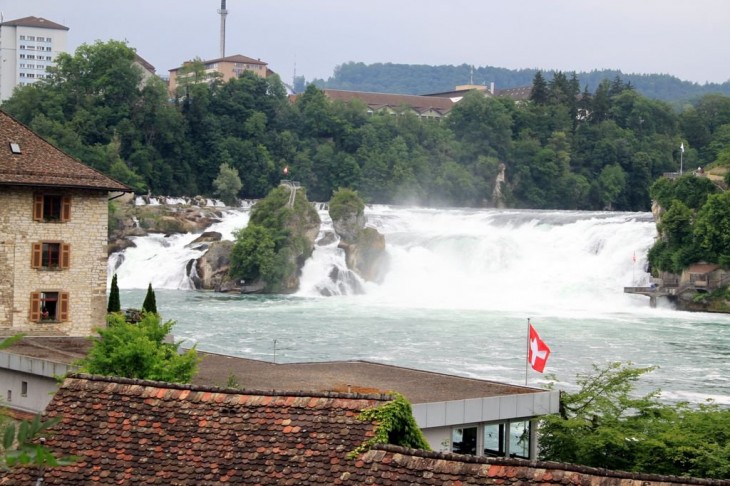 Europe’s largest waterfalls are in the Rhine River (Rhein) near the town Schaffhausen on the Swiss-German border. The Rhine Falls (Rheinfall) area is a very popular day-trip destination from Zurich and the Lake Constance (Bodensee) region with endless bus parties arriving throughout the day. Arriving early is the best option to enjoy the falls and surrounding countryside in relative peace. Restaurants, boat trips, souvenir shops, and various “experiences” are available to enhance the pleasure of visiting Europe’s largest waterfalls but it is also very easy to enjoy the area completely for free.

At Rheinfall, the Rhine River falls 23 m over the full 150-m width of the river. Other Swiss waterfalls are higher and more spectacularly beautiful but the Rhine Falls remains Europe’s largest and most powerful waterfalls.

The water flow at the Rhine waterfalls ranges from around 600,000 liter per second in summer to 250,000 liter per second in winter. The power of the water has been utilized for industrial use since at least the eleventh century with hydroelectric power generation in operation since the nineteenth century. The abundance of cheap energy vastly contributed to the early development of aluminum production.

Visiting the Rhine Falls in Switzerland 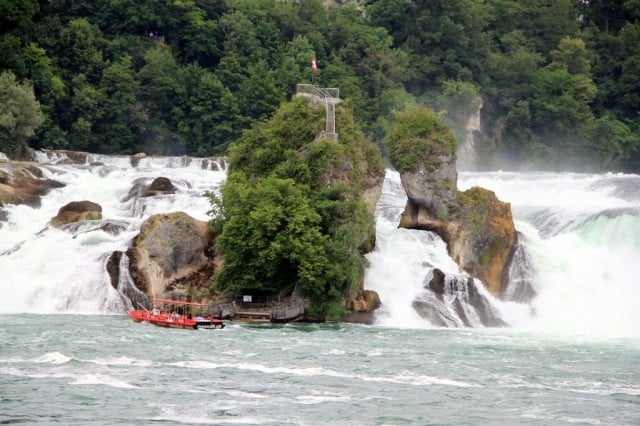 As one of the most popular tourist destinations in Northern Switzerland, the Rhine falls offer the full range of visitors’ facilities that can be expected of a site popular with day-trippers and bus parties. Various restaurants and souvenir shops sporting endless trinkets with the red-and-white Swiss flag are available on either side of the river.

Visitors can enjoy several boat excursion trips: simply cross the Rhine River, cruise closer to the waterfalls, or most spectacularly to land on a small rocky outcrop right in the middle of the falls. Sights-and-sounds boat trips with commentary are also available, although some may find the promise of commentary in up to nine languages somewhat off putting. Boats usually operate from April to October with most boats departing from the right bank (Schlössli Wörth Castle) of the Rhine River.

Similarly, visitors can hike for free along the right bank of the Rhine on paved routes through the forest to see the falls close-up. The views from here are hardly less spectacular than from the paid sites, such as the rock in the middle of the falls accessible by boat only.

It is an easy hike on paved routes to the upstream railway bridge where hikers and cyclists can cross the Rhine within view of the falls. On the left bank, visitors can pay to follow a belvedere trail and use a panorama elevator from the Schloss Laufen Castle for close-up looks of the falls. Once again, many may find the free views totally satisfactory.

Most of the hiking routes close to the Rhine Falls are paved but many stairways make them unsuitable for wheelchair users or strollers. Fine views can be enjoyed from the promenade on the right bank that is accessible to wheelchairs while a marked route on the upper reaches of the left bank allow wheelchair users to enjoy some of the views.

The Rhine Falls are in the community Neuhausen just 3 km downstream from the pleasant historic old town of Schaffhausen. Transportation options to the Rhine Falls are numerous with cars, buses, trains, boats, and bicycles providing easy access from Schaffhausen and many other parts of Switzerland.