Germany has many museums with automobile-related exhibits and collections. However, for many car enthusiasts, the official works museums are the most enjoyable. At these car museums, the focus is usually only on one manufacturer, marque, or brand, and the aim to show the best cars top German automobile makers have produced in the past century and a bit. In recent years, German car manufacturers have invested in brand new, glitzy museums at their respective head offices. In Stuttgart, it is possible to visit the Mercedes Benz and Porsche museums, in Munich the BMW Museum, in Ingolstadt the Audi Mobile Museum, and in Wolfsburg the Volkswagen Zeithaus Museum.

Vintage and Historic Cars in the Mercedes Benz Museum, Stuttgart-Untertürkheim 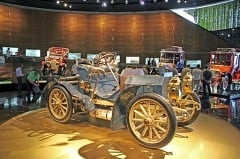 The large Mercedes Benz Museum is just outside Daimler’s main plant in Stuttgart-Untertürkheim. On display is a wide range of Mercedes Benz cars from the first motorcar produced in 1886 to the present. (The first car at this museum is a copy – the original 1886 Benz is in the German Museum in Munich.) Many luxurious cars on display were once owned by international statesmen and other famous people.

The Mercedes Benz Museum is open Tuesday to Sunday from 9 am to 6 pm. Admission is €8.

Sports and Racing Cars in the Porsche Museum, Stuttgart-Zuffenhausen 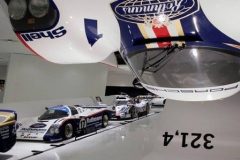 A new Porsche Museum opened in 2009 in Stuttgart-Zuffenhausen. The new museum is in a futuristic building that replaced the old, cramped museum that has become a bit of an embarrassment for a marque as glamorous as Porsche. On display are a range of sports and racing cars – almost all cars here are in working order and some are still used for historic races and events.

The Porsche Museum is open Tuesday to Sunday from 9 am to 6 pm. Admission is €8.

Cars and Motorcycles in the BMW Museum, Munich 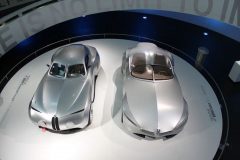 BMW recently updated its museum located in between the huge, modern BMW Welt (showrooms and event center), the BMW Head Quarters, and a BMW plant. The still futuristic-looking BMW Museum and headquarters actually date from the 1970s, as do the adjacent sports facilities used for the 1972 Olympic Summer Games. The BMW Museum displays a range of BMW cars and motorcycles as well as other BMW-engineered products including airplane engines.

Audi has a long history combining several brands and marques through mergers and creating more through acrimonious divisions. As a result, Audi has plenty of cars to display from former brands including Horch, DKW, Wanderer, and Auto Union. Audi’s “museum mobile” is at the heart of the modern Audi Forum Ingolstadt center that is used for shows, musical events, and festivals.

Volkswagen’s Zeithaus in the Autostadt, Wolfsburg

Volkswagen’s museum in Autostadt is the Zeithaus (literally, Time House). It is dedicated to the development of the motor vehicle and although the emphasis is on Volkswagen, important cars from other marques are also on display. It claims to be the most popular car museum in the world and really does have a fantastic collection of important cars from 60 different brands.

The Volkswagen Zeithaus museum can only be seen as part of the larger Autostadt complex. Opening hours are daily from 9 am to 6 pm. Admission to Autostadt (including the Zeithaus) is €15 (or €22 for two consecutive days). Admission after 4 pm is €7 and refundable at onsite restaurants (open until 11 pm).

Near to the Autostadt, but completely separate from it, is the AutoMuseum Volkswagen – the brand museum of VW. It is a more traditional marque museum quite different from the PR and glitz of Autostadt and well worth visiting in addition to the Zeithaus. Around 130 VWs are on display including many Beetles but also other models and older VW design studies and research vehicles. Opening hours are Tuesday to Sunday from 10 am to 5 pm. Admission is €6.

Other Technology Museums in Germany

Other technology museums in Germany with great displays of motor vehicles include the Deutsches Museum (German Museum) in Munich, the Sinsheim Auto & Technik Museum, and the EFA-Museum für Deutsche Automobilgeschichte (Museum of German Automobile History) in Amerang, Bavaria. A further excellent car museum is the French National Motor Museum in Mulhouse, Alsace, just a few minutes’ drive from the German border (and full of Bugattis).