The brown bears in the Bärenpark (Bear Park), which replaced the old Bärengraben (pits), are a top sight to see when visiting the historic town of Bern, Switzerland. 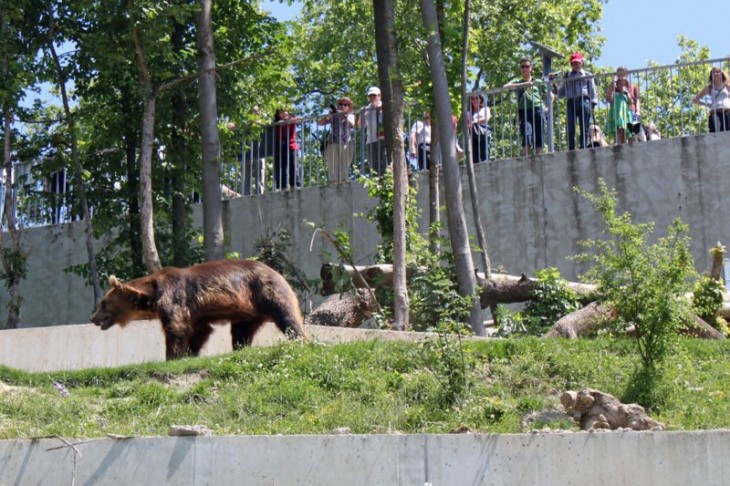 The Bärengraben (Bear Pit) has long been a top sight in the Swiss capital Bern. However, from October 2009, a new Bärenpark (Bear Park) replaced the old-fashioned pit. Bears, the symbol and name-giver of Bern, are able to roam freer in the new park and in keeping with more modern notions of humane animal care. The new Bern Bärenpark is located adjacent to the bear pits at the Nydeggbrücke Bridge across the Aare River. Visiting the bears has long been very popular, especially with children, when traveling to Bern and the new bear park reflects Bern’s love of the bear better than the old pits. Admission remains free.

The Bärenpark (Bear Park) in Bern 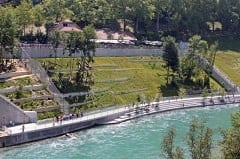 The new Bärenpark (Bear Park) replaced the old Bärengraben (Bears Pit), which for decades have been one of the tops sights in Bern. Bears are of course the main attraction but the new park is much larger and as the name indicated a park rather than a drab, somewhat depressing pit. The new park incorporates the old pits for a total size of around 6,500 square meters.

In the Bärenpark in Bern bears have a much more interesting home than in the previous zoo-like pits. The landscape of the new park ranges from forest areas, hill slopes, grasslands, and even access to the Aare River. 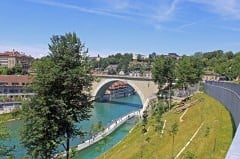 The bears in Bern are now able to forage for food or even catch fish fresh from the river. Although the bears will still be fed, visitors are no longer permitted to throw food to the bears.

In contrast to the old pits, the bears now stay outside all year as well as over night. Infrared cameras in the caves and other hiding places allow visitors to observe at all times what the bears are up to. Webcams give the bears of Bern a worldwide reach via the Internet.

The park caters for a brown bear couple, where cubs will stay with the family until a suitable removing time between the ages of one and five years. The first bears staying in the Bärenpark were Björk (f) and Finn, (m) joined by their cubs Ursina (originally Urs until it became clear he was female) and Berna. 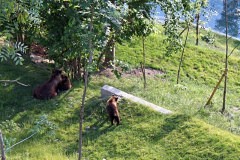 Keeping live bears to entertain visitors has a long tradition in Bern. Live bears were on display in town from at least 1513, while the bear pit has been located at the present Bärengraben site at the Nydeggbrücke Bridge since 1857.

Bern’s love of bears is no coincidence. According to tradition, at the end of the twelfth century, Duke Berchtold V von Zähringen killed a bear on the peninsula jetting into the curve of the Aare River. He promptly called his new town located here Bern, after the German word for bear. (The modern, High German for bear is Bär, while the plural, Bären is pronounced very similar to Bern.)

Bears not only give Bern its name, but a bear also feature on the town emblem and flag. In Bern, visitors will no doubt spot many bears when walking in the old town. Bears adorn everything from the town hall to cakes and tourist souvenirs.

As with the Bärengräben, the Bärenpark is open year round and admission is free. Visitors can see the bears from paths and bridges, with some of the best views of the park from the Nydeggbrücke spanning the Aare River. The bear park is both child and wheel chair friendly.

Transportation to the Bärenpark (Bear Park) in Bern

The Bärenpark (Bear Park) is at the Nydeggbrücke Bridge on the opposite bank of the Aare River from Bern’s old town. It is a very pleasant walk from the old town to the bears – simply follow Krammgasse down to the river. 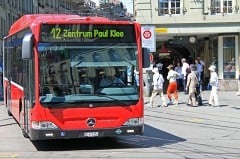 Alternatively, use bus 12 from the Hauptbahnhof and through the old town to bus stop Bärengraben, the first stop once across the Nydegg Bridge and the Aare River. For lovely views of Bern, go one stop past the Bärengraben and stroll back downhill or hike in the opposite direction up to the Rosengarten.

As the Bärenpark incorporated the old Bärengraben, older maps and guidebooks are still useful to guide visitors to the Bern bears. Similarly, the bus stop remains Bärengraben.

The restaurant in the Tram Depot above the Bärengraben serves hearty local cuisine and fine beers at fair prices.

Further top sights worth seeing in Bern include the beautiful historical old town that was inscribed on the UNESCO World Cultural Heritage list, endless historic fountains, covered arcades, the Einstein Museum, and the magnificent Zentrum Paul Klee Museum, which is the final stop for bus 12 en route from the old town past the bears.