The Zentrum Paul Klee in Bern has the largest collection in the world of works by this artist beautifully displayed in a huge, modern art gallery. 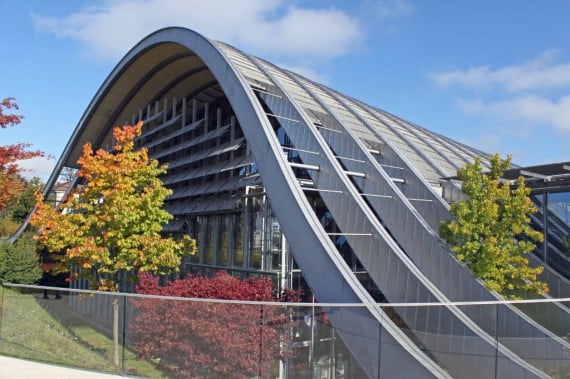 The modern Zentrum Paul Klee in the outskirts of Bern is the depository for around 4,000 works by the Swiss-born German artist Paul Klee. His works are displayed in special themed temporary exhibitions that rotate annually. The two galleries can be seen independently. The center also hosts many cultural events and offers frequent workshops to children. The Zentrum Paul Klee is within very easy reach of downtown Bern by bus 12.

The German painter Paul Klee (1879-1940) was born near Bern in Switzerland to a German father and Swiss mother, which made him German according to Swiss law of the time. His application to become a Swiss citizen was being processed at the time of his death.

Paul Klee spent most of his childhood in Bern but like many other German-speaking artists of the early twentieth century answered the lure of Munich to study art.  It was of the pre-First World War Munich, and especially the Bohemian suburb of Schwabing, that Thomas Mann famously wrote (to the eternal joy of the tourist office) “München leuchtete” (Munich shone).

Paul Klee was a member of the pre-First World War Blaue Reiter (Blue Rider) movement, which was based in Munich and southern Bavaria. This movement was utterly destroyed by the ravages of the war. (Many works can be seen in the Lennbachhaus museum in Munich.) After the war, Paul Klee taught at the Bauhaus in Weimar and Dessau before moving to the Art Academy (Kunstakademie) in Düsseldorf.

In 1933, soon after coming to power, the Nazis had Paul Klee promptly removed from his position but his work was only termed degenerate art (Entartete Kunst) in 1937 with more than hundred works removed from public galleries and art museums – some were sold abroad. In the long run, this of course meant no loss in reputation – no less than 17 works made it into the Nazi’s degenerate art exhibition in Munich that toured 12 further cities in Germany. The Nazis special degenerate art exhibitions actually brought modern art to the attention of many people who previously had not shown any interest in modern art.

Paul Klee returned to Bern and spent most of the rest of his life in Switzerland. He died in 1940 at Locarno.

Paul Klee’s work has been associated with Expressionism, Cubism, Futurism, Surrealism, and Abstraction but he generally followed his own direction and created whatever he was in the mood for. He used a wide variety of materials and techniques. Paul Klee was also a talented musician and wrote some poetry.

The Zentrum Paul Klee, with around 4,000 works, is by far the largest depository of the artist’s work. Around 10,000 works by Paul Klee survived – he was not only prolific but meticulous in cataloging his works. His busiest year was 1939 when he catalogued 1,253 works – the lowest point was 1936 when he produced only 25 works. Many works show the date, catalogue number, and titles as catalogued by Klee.

Many of the Klee’s works are very fragile with the subtle colors risking fading if exposed continuously to light. As a result, works are exhibited in rotating temporary exhibitions. The Zentrum Paul Klee typically has two exhibitions running for around a year at a time with works selected by a specific theme. Well over a thousand works are exhibited at any given time.

The current exhibitions have some of the works Paul Klee created as a child. After becoming an established artist, he rediscovered in his parents’ house drawing he had made aged 6 to 10. He promptly catalogued these works too and some works show how he later developed some childhood themes and ideas further.

They serve as a gentle reminder to parents to not throw away children’s art works. Paul Klee’s childhood drawings are no better than most children’s – only from his mid-teens he did he show serious talent.

Admission to the Paul Klee Zentrum is a fairly hefty CHF22 for adults (CHF10 for children) to see both exhibitions. If only one of the two exhibitions is visited the price is CHF18 for adults (CHF8 for children). Youths aged 16 to 26 may visit for free the first Saturday of the month. The Swiss Museum Pass is valid.

Visitors traveling to Bern by train can often profit from special Swiss Railways SBB RailAway-Kombi deals that give discounts on the train and / or museum entry. Enquire at the station or travel agent.

Descriptions in the museum are generally in German and English with audio guides available in several languages. A special audio guide for children is available with some selected works hung lower to be at eye level for smaller visitors.

Guided tours are available with the English tour usually the first Sunday of the month at 3 pm and German every Saturday at 2 pm.

Transportation to the Paul Klee Zentrum in Bern

Getting to the Zentrum Paul Klee is very easy both by public transportation and by car. The complex, which houses a very large conference center as well, is in the eastern suburbs of Bern in an area full of greenery and many marked hiking trails with play areas for children.

The easiest public transportation option to the Zentrum Paul Klee is by bus 12, which terminates at the gallery. (Buses back to the town center are marked 12 Länggasse.)

At peak hours, the bus runs every six minutes and even at quieter times it is hardly necessary to check the timetable in advance. En route, from the station (Hauptbahnhof) bus 12 passes straight through the lovely old town, crosses the Aare River on the Nydegg bridge, and goes past Bern’s famous bear park (Bärengraben). The bus ride from the station to the art gallery takes just less than 20 minutes.

Bern has several Wege zu Klee walkways that pass places painted or associated with Paul Klee. For a short but pleasant walk with beautiful views of the Aare River meander, the bear park, and old town, alight at bus stop Liebegg and walk down hill to the Bärengraben

By car, use the exit Bern-Ostring from the Auotbahn A6 towards Thun – it is very close to the intersection with the A1. Ample parking (charged) is available.

If traveling by train to Bern, check if Swiss Railways has special Rail&Away offers for the Zentrum Paul Klee that may give small discounts on train travel and museum admission.