Direct flights to Bern-Belp Airport (BRN) allow travelers from London, Paris, Amsterdam, Munich and other European cities to fly to Bern without having to transit through Zurich, Geneva, or Basel Airports.

Bern-Belp Airport (BRN) is very conveniently located for travelers to the Swiss capital. The airport is only minutes from downtown and enjoys some of the shortest check-in times in Europe. Air France flies to Bern from Paris-Orly, Lufthansa from Munich, and SkyWork from Amsterdam, Berlin, London, Rome, Vienna and many other European destinations. Well over 100 destinations can be reached through connection flights on Lufthansa and Air France from Bern offering a real alternative to flying via Zurich, Geneva, or Basel airports in Switzerland.

During 2012, SkyWork will add daily flights to Köln-Bonn (CGN) and during summer many holiday destinations on the Mediterranean coasts.

Air France (AF) flies twice daily from Paris-Orly (ORY) to Bern-Belp Airport (BRN). This allows Air France passengers to transfer from all its destinations around the world to flights to the Swiss capital.

BE has a weekly flight during winter from Southampton (SOU) to Bern, mostly to bring skiers closer to the Swiss ski slopes.

Getting to Bern-Belp Airport (BRN) is very easy by car or bus from Bern.

Bern-Belp Airport is around 10 km to the south of Bern. The driving time is around 20 minutes. It is generally easiest to follow country lanes from Bern to the airport via Seftigenstraße and Kehrsatz. If arriving from further afield, exit Autobahn A6 at exit 14 (Belp Airport).

Bernmobile Airport Bus line 334 provides generally the best public transportation connection to Bern Belp Airport as the bus times are coordinated with flight arrival and departure times. Buses wait for late arrivals from 8 pm onwards. The Airport Bus 334 bus leaves from Perron (Bay) 6 of the Bern PostAuto bus station behind the main train station (Hauptbahnhof). The traveling time is just less than half an hour.  The one-way fare is CHF6 – tickets are available from the driver and machines, while all standard Swiss railway passes and discount cards are valid. 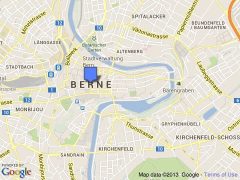 A slightly more complicated alternative is to use bus 160 to Belp train station and continue from here on S3, S4 or S44 to Bern station. This routing is, however, very useful for travelers heading to destinations other than Bern served by direct trains e.g. Biel /Bienne, Wankdorf, and Thun.

During winter, a special bus is available from Bern Belp Airport to ski resorts including Interlaken-Lauterburnnen (Wengen/Mürren) und Grindelwald.

For intercontinental travelers, it is generally easiest to fly to Zurich Airport (ZRH) and then take the train from the airport to Bern. However, travelers who will transit in Paris or Munich may well find it easier to fly directly from there to Bern Belp. Cheap European flights on low-cost airlines are usually available to Basel Airport, which is a bus and train ride from Bern.