Le Poët-Laval is a very small fortified village beautifully located in the Drôme region of northern Provence in France. Top sights to see in this wall-enclosed town include a castle, church ruins, medieval buildings, a small museum, marvelous views and town fortifications.

The very small wall-enclosed town Le Poët-Laval (population almost 900) is mostly visited for its compact medieval old town with lovely views of the Le Jabron valley and surrounding mountains in the Drôme region of northern Provence. A castle keep from the twelfth century and a small museum on Protestantism in the region are further cultural attractions. Town gates and watchtowers from the fifteenth century, narrow alleys and arches, as well as beautiful flowerbeds help to make Le Poët-Laval one of the most beautiful villages in France.

Le Poët-Laval has a beautiful location on a hillock in the Jabon Valley from where visitors can enjoy lovely views of the interesting mountains that typify this part of Drôme in Provence. The medieval old town is very small but perfectly restored, as is common with many small towns in the region with artists’ homes and studios. A labyrinth of narrow medieval alleys makes this historic old village a pleasure to explore.

At the top of Le Poët-Laval is the twelfth-century castle donjon that belonged to the Knights Hospitallers of St John of Jerusalem, Rhodes, and Malta. The interior of La Commanderie du Poët-Laval can only be seen from mid-June to mid-September, from 10:30 to 12:30 and 3 to 7 pm (Closed on Mondays).

Adjacent to the chateau are the ruins of the Romanesque Chapelle St Jean des Commandeurs (St John’s chapel). The church was used by both town and castle, with the commander of St Jean being able to attend church services from the higher castle forecourt without having to walk downhill to join the town’s people at the regular church floor level.  Much of the church collapsed during the 1930s with only the tower and part of the choir restored. 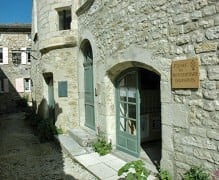 Towards the lower part of the old town is the small Musée du Protestantisme Dauphinois (Museum of Protestantism in the Dauphinois region). The museum is located in a fourteenth-century manor house that was later used as a reformed church and one of very few protestant churches in France that survived from before the nineteenth century. The museum is open daily from April to November from 3 pm to 6:30 pm. In July and August, it is also open from 11 am to noon (except on Friday and Sunday mornings).

Transportation to Le Poët-Laval in the Drôme Region, France

Le Poët-Laval is easiest reach by car although cycling is also a very popular activity in the region.

Le Poët-Laval is on the D540 road between Montélimar (25 km) and Dieulefit (4 km). The town can also easily be reached from other popular towns in the region such as Crest, Grignan, Taulignan, Valreas, and Nyons.

Parking lots are available at the bottom of the old town. On a quiet day, it is worth following the signs to the parking directly behind the chateau at the top of the hill.

Food and drinks are available from a couple of restaurant-cafés but picnicking is also an attractive option. Artist studios are mostly open on weekends only, except during July and August.

Le Poët-Laval in Drôme en Provence claims to be one of France’s most beautiful villages (Les Plus Beaux Villages de France). The town certainly is photogenic and outside the main holiday season and weekends, pleasantly quiet.