The Swiss National Museum (Landesmuseum Zürich) is the largest culture and history museum in Switzerland and a top sightseeing attraction in Zurich.

The Swiss National Museum in Zurich (Schweizerisches Landesmuseum Zürich) is the largest and most important depository of cultural and historical items in Switzerland. The museum’s permanent displays include sections on Swiss history, furniture, interiors, weaponry, and a vast collection of art, crafts, fashion, and decorative items. Temporary exhibitions enhance the permanent collections to illustrate in more depth various elements of Swiss history and culture. The Swiss National Museum is one of the most popular museums in Switzerland and a top sightseeing sight to see when visiting Zurich.

The History of Switzerland Exhibition in the Landesmuseum, Zurich

The oldest man-made items in the Swiss history section of the Swiss National Museum in Zurich are earthenware shards from around BC 5000 while the newest items are Christmas decorations from 2010. The whole spectrum of Swiss history in between is covered by the museum.

The history exhibition also deals with popular Swiss images and myths, including Heidi, Edelweiss, Wilhelm Tell, cowbells, and the foundation of the confederation. While the museum admits that there is no evidence that Wilhelm Tell ever shot an apple from his son’s head, there is also no proof either that the event is completely imaginary.

Swiss Homes and Interiors in the Landesmuseum, Zurich 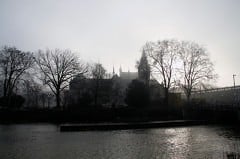 The Swiss National Museum has long been famous for the eleven historical Stuben that are preserved inside the museum. (Stuben are rooms that were heated smoke-free, i.e. not by an open fire, and are found in both public buildings and private homes.)

Most of these rooms, including rooms from the Gothic, Renaissance, and Baroque periods, are wood paneled and reflect the taste of the times. These rooms were rebuilt as part of the structure of the museum at the end of the nineteenth century. More modern Swiss furniture is also displayed with an emphasis on Swiss designer furniture of the twentieth century.

Art, Crafts, Decorative Items, Arms, and Coins in the Landesmuseum 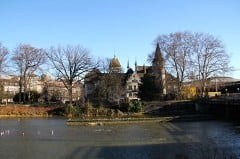 The Landesmuseum further has a large collection of art and decorative items. The home crafts and decorative arts on display are particularly impressive. However, fine arts are probably better appreciated in the large number of dedicated art museums and galleries found throughout Switzerland – Zurich alone has several covering all genres.

A collection of weaponry and arms is on display in the Waffenturm (Tower of Arms), while a large diorama illustrates the fifteenth-century Battle of Murten where the Swiss achieved a famous victory over Burgundy. Neutral – but well armed – has long been a cornerstone of Swiss international relations.

A small but impressive coin collection is on display in the Munzkabinett, which is somewhat hidden away behind the diorama near the cloakroom.

Opening Hours and Tickets for the Swiss National Museum 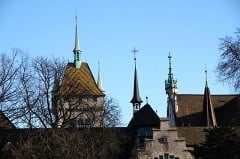 The Swiss National Museum is open Tuesday to Sunday from 10 am to 5 pm, closing at 7 pm on Thursdays.

Admission to the Swiss National Museum in Zurich is CHF10. Children aged enter for free.

Admission to the museum is included in the Swiss Museum Pass and the Zürich Card. The Landesmuseum alone covers half the cost of the 24-hour version of the popular Zürich Card transportation and visitor’s savings pass.

Audio guides and guidebooks are available from the ticket windows but virtually all items inside the Landesmuseum are labeled in English (and German and French and Italian). For rooms without English descriptions, English information sheets are available.)

Transportation to the Swiss National Museum in Zurich

Getting to the Swiss National Museum is very easy, especially when using public transportation. The Landesmuseum is located in a nineteenth-century historical building at the confluence of the Limmat and Sihl Rivers right next to the busy SBB Zürich Hauptbahnhof (Central Main Train Station) in downtown Zurich.