The Einstein Museum in the History Museum in Bern covers the life of Albert Einstein, his theories on relativity, and work in Switzerland, Germany and the USA. 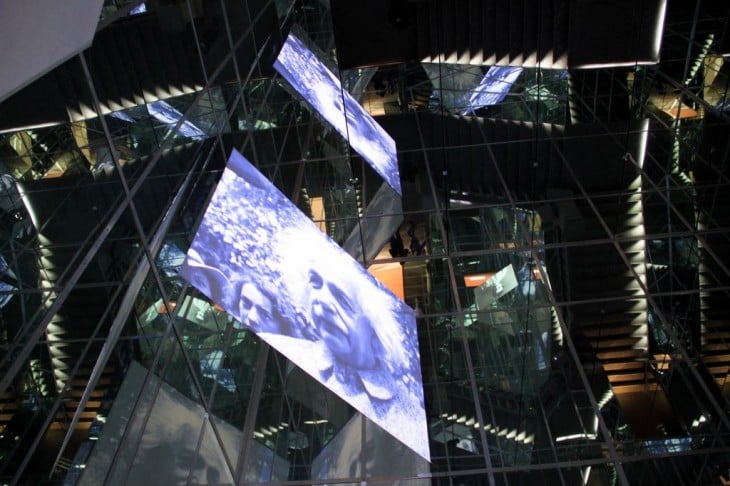 The Historisches Museum (History Museum) in Bern has a large exhibition dedicated to the life and work of Albert Einstein (1879-1955). This Einstein Museum uses photos, original documents, and instruments of Einstein, as well as contemporary items and multimedia, to explain not only the work and theories of Einstein but also the human behind the science. A further Einstein sight in Bern is the Einstein House, where Einstein lived in the old town during the early twentieth century.

The Einstein Museum in the History Museum, Bern

The Einstein Museum is entered via a spectacular mirror-lined staircase where multimedia images of Einstein are displayed on various screens. The exhibition starts with the heritage of Jews in Europe from the Middle Ages to the nineteenth century. Although Jewish, religion played a minor role in Albert Einstein’s life.

The Einstein Museum displays 550 items from Einstein’s life and uses 70 films to explain his life and works. His private life, including his pleasures and failed marriage, is illuminated together with his scientific works, theories, and pacifist work.

Albert Einstein was born in Ulm, Germany in 1879 but the family moved to Munich (München) the following year. He attended school in Munich and from 1895 in Aarau (Switzerland). Many school reports and comments by teachers are on display.

As a young boy Einstein found it hard to cope with the discipline of school life and even at university his grades were not always exemplary. Although this may give some hope to many parents, it is worth bearing in mind that very few lazy or naughty boys do turn out as Einsteins in later life.

Albert Einstein studied in Zurich from 1896 to 1902. After graduating, he found it impossible to find a full-time teaching or academic position.

In 1902, Einstein found a job at the Patent Office in Bern. This allowed him a steady income and some free time to raise a family and develop his theories and ideas. His house in the old town area is now the Einstein Haus Museum, a private museum that should not be confused with the more complete exhibition here inside the History Museum Bern.

Einstein was suddenly famous and received teaching invitations and jobs from several prominent universities including Zurich and Prague.

From 1914 to 1933, Albert Einstein lived and worked in Berlin. During this period he won the Nobel Price for Science (1921) for his explanation of the photoelectric effect but he spend most of his acceptance lecture on his then still controversial General Theory of Relativity (published in 1916).

His marriage to Mileva Maric fell apart during the Berlin years. The museum has an almost tabloid-like exposition of the (rather embarrassing) demands he set to his wife to remain living in the same house. These include amongst other things three square meals served promptly each day, a tidy home, total privacy in his room, sole use of the desk, and no intimacy. She refused and promptly moved the children back to Switzerland.

During this period, Einstein also became involved in international politics and a strong proponent of the League of Nations and the avoidance of war. He traveled on a German diplomatic passport while attending League of Nations sessions. This led to problems later when the Swiss consulate refused him assistance in claims against Germany. However, he was allowed to keep his Swiss nationality even after becoming a citizen of the United States of America in 1940.

Following the power grab by the Nazis in Germany in 1933, Albert Einstein decided to remain permanently in the USA. He worked and taught mainly in Princeton until his death in 1955. Although Einstein appreciated American democracy, he never developed a taste for American culture.

In his later years, Einstein was blamed, amongst others by Time magazine, for making the development of atomic weapons possible. However, due to his pacifist and communist sympathies, the US authorities never trusted Einstein enough to allow him any work on the development of nuclear weapons during the Second World War.

The Einstein Haus in Bern

The house in Kramgasse 49 where Einstein lived during the early 1900s is now a private museum. This Einstein-Haus Bern uses mostly photos to explain the life of Einstein and is far less accomplished than the Einstein Museum in the Historisches Museum Bern.

Visitors Information for the Einstein Museum

Admission to Einstein Museum is CHF18 and includes admission to the permanent collection of the History Museum. The Swiss Museum Pass is accepted.

See Visit the Einstein and Historisches Museum Bern for more visitors information and opening hours of the Einstein Museum.