Westfield Stratford City next to the 2012 Olympic Games venues in London is Europe’s biggest in-town shopping mall with well over 200 outlets. 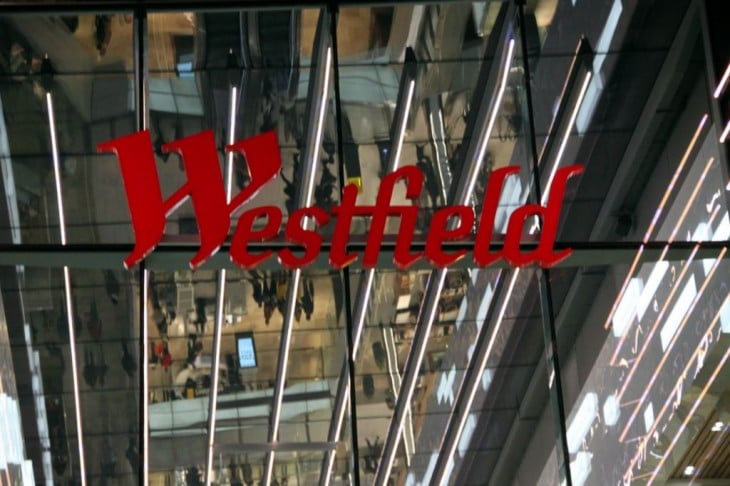 Westfield Stratford City shopping mall, next to Stratford station and the 2012 Olympic Games venues in eastern London, claims to be Europe’s largest in-city shopping center. With around 230 stores, all international fashion brands are united under one roof.  Around 75 restaurants serve food for all tastes. Cinemas (Vue), bowling lanes, and Aspers Casino provide alternative entertainment to shopping. Transportation is very convenient, whether arriving by car, train, underground, or Docklands Light Railway (DLR). 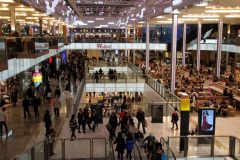 Fashion stores at Westfield range from the mainstream brands such as H&M, Next and GAP to more exclusive labels such as Calvin Klein, Hugo Boss, and Prada. The more exclusive brands are often found on The Street – the pedestrianized street outside the main shopping mall.

Watches are sold by many accessory stores but several major watchmakers have their own brand stores at Westfield Stratford City. Breitling, CK Watches, Omega, Swatch, and TAG Heuer all have their own outlets here.

Apple, Bose, Nokia, and Samsung have their own large brand stores at Westfield mall while most British phone companies have representative shops in the mall too. Currys PC World. HMV, Game, and WH Smith have further electronics, games, music, and books.

Children are also well catered for. Many fashion stores have kids’ sections and some have children fashion only stores such as Bebe Bisou, Boys Base, Mothercare, Russell & Bromlex Kids, and Tommy Hilfiger Kids Store. Children will probably enjoy more the Disney Store and Lego, which sells many Lego toys no longer available through supermarkets and other outlets. 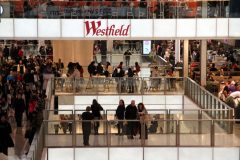 Westfield Stratford City sports around 75 restaurants, cafés, and kiosks selling food and drinks. The pure numbers make for a wide variety of cuisines and most visitors would find something to their tastes.

Restaurants are generally international or national British brands. All the famous brands are represented from McDonalds to Harvey Nichols. Many outlets share food courts, which is convenient for families and groups collecting food from different restaurants. However, the sit-down restaurants – many are on the second floor – offer table service and a more relaxing atmosphere.

Vue Cinemas with 17 digital screens offer alternative entertainment to shopping or eating. All Star Lanes have a bowling alley while an ice skating rink is available during the Christmas season.

Aspers Casino, the first super casino in the UK, is located on the top floor of the shopping center. 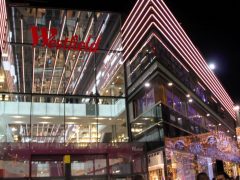 Shop opening hours at Westfield Stratford City center are generally long. During the week, shops are open from 10 am to 9 pm, on Saturday from 9 am to 9 pm, and Sunday from noon to 6 pm. During vacation periods such as Christmas, shopping hours are often longer.

Getting to Westfield Stratford City shopping mall is very easy from central London, whether traveling by car, train, underground, or bus. Driving is a sane option for many with 5,000 parking spaces and first two hours parking for free. 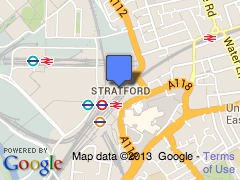 Trains go from London Liverpool Street Station to Stratford in 10 minutes but many visitors from central London may find the Underground (Tube lines Central and Jubilee) or Docklands Light Railway (DLR) simpler to use. Stratford is in fare zone 3.

Being at the heart of London’s 2012 Olympic Games venues, several hotels are available in the vicinity. Directly at the shopping mall itself are a Holiday Inn, Premier Inn and Staybridge Suites while better value may often be found a short DLR-ride away at the Excel Center.