The Novotel London Excel is a conveniently located, modern hotel with rooms sleeping up to four at reasonable and at times very cheap prices. 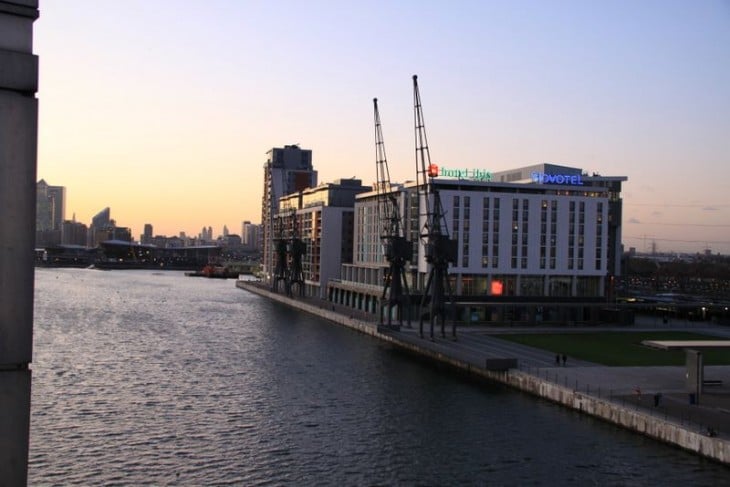 The Novotel London Excel is a modern, family-friendly four-star hotel in a convenient location near London City Airport, Stratford, the 2012 Olympic Venues, and O2 arena. Travel to Central London is easy on the London Dockland Railway (DLR) or tubes. Bedrooms can sleep up to four in comfort and children under 16 stay and breakfast for free when traveling with parents.

The Novotel London Excel is a very modern hotel aimed mostly at business travelers. However, its bedrooms can sleep up to four making it a very good option for families too, as children under 16 sleep for free. Special deals are often available during weekends and holiday periods when the hotel can become a true bargain for leisure travelers and rooms go for as little as £70 – at least £100 less than a similar Novotel hotel will charge in central London.

The Novotel London Excel is furnished in the most current Novotel style with light wood furniture, a double bed, and a sofa that folds out to form a second double bed. The room is reasonably spacious when the sofa bed is folded but becomes somewhat cramped when in use.

Many rooms have views of the Victoria Dock that is now out of use but many harbor cranes were left in place to preserve the atmosphere of a docklands minus the boats and hectic activity. Some maritime elements are repeated in the public areas to give the Novotel London Excel slightly more character than most other Novotel hotels. However, it remains a chain hotel and a bit soulless but in middle class London hotels that is often not a bad thing. Here everything works and the staff is both friendly and professional.

Many rooms have views of the Excel Exhibition Center and O2 Arena while from some London City Airport can be seen. Plane noise is fairly unobtrusive, even with the windows open, while other traffic noise is mostly absent from the quietly located Novotel London Excel.

Rooms have a kettle with coffee and tea supplies, a small bar fridge, and a fairly large combination safe. The flat screen TV has only a limited number of free programs but a wide selection of pay-for channels and movies. In-room internet is similarly charged for.

As with other Novotel hotels, the toilet is in a separate space but rather irritatingly without an own washing basin. The white bathroom is well lit and features a full walk-in shower in addition to the bath.

The Novotel London Excel has all the additional facilities that can be expected of a four star, mid-scale city hotel including a fitness room with sauna and hamman, bars, and restaurant. The terrace of the restaurant has marvelous views of the Victoria Basin, Excel Exhibition Center, O2 Arena, and the London skyline.

Two free computers with internet access and printers are available for guest use. As wifi is charged for in the rest of the hotel the queues can be daunting at times. Children can also battle it out for a go on the Xbox and other toys in the playroom. 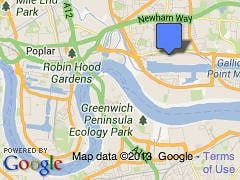 The Novotel London Excel is conveniently located for a wide range of travelers to London. Its location directly next to the Excel Exhibition Center makes it a top choice for travelers with business there.

The Novotel London Excel is also close to the Custom House station(fare zone 3) of the Docklands Light Railway (DLR) allowing for fast connections to many London destinations. To reach the hotel, take the trains towards Beckton (change DLR trains in Canning Town if necessary). Stratford, with the 2012 Olympic venues and Westfield Stratford City – the largest in-city shopping center in Europe – is only a ten-minute ride away on the DLR.

Central London can easily be reached on the DLR. The Tower of London is a simple 20-minute ride away while further parts of Central London can easily be reached in half an hour with tube connections, e.g. the Jubilee Line from Canning Town gives fast access to amongst others the O2 Arena, Canary Wharf, London Bridge, Westminster, and Green Park. A cable-car link will make transportation even easier to the O2 arena by the end of 2012.

London City Airport (LCY) is only a ten-minute ride away from the Novotel London Excel – change DLR trains at Canning Town. Alternatively, a taxi cost around £12, or half-an-hour’s walk.

The area can be a bit quiet with restaurants and pubs closed when nothing is happening in the Excel Center over major holiday periods. However, a small convenience store with long opening hours (and a well-stocked alcohol supply) is only a block away with a larger Spar supermarket two blocks away near the Royal Victoria DLR station.

Alternatives to the Novotel London Excel are the Ibis London Excel Docklands, which is slightly cheaper and in the same building but with separate entrances, and the Crowne Plaza London Docklands

two blocks to the west.