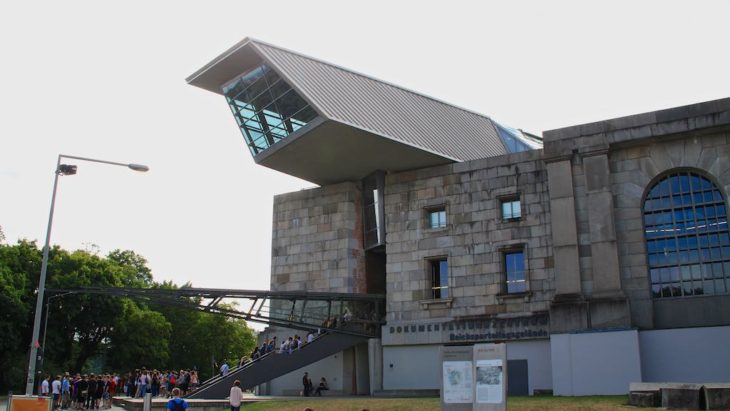 The German city Nuremberg (Nürnberg) has a long history but in the English-speaking world is mostly associated with the infamous Nazi Party rallies of the 1930s and the post-Second World War Nuremberg Trials. Nuremberg has interesting old town with important museums but travelers should also travel to the south of the city to see the sights associated with the Nazi Party rallies. The most important Nazi-era sights in Nuremberg include the Reichsparteitagsgelände (Nazi Party Rallying Grounds) with a very interesting and informative documentation center in the Kongreßhalle (Congress Hall), the Zeppelin Tribune, and the Große Straße (Great Road).

The Nazi Party rallies in Nuremberg were weeklong extravaganzas with a mix of endless speeches, parades, a folk festival, sporting events, and military tattoos. These party rallies, especially after Hitler came to national power, were an opportunity for the Nazis to show off their might and to influence friends and foreign powers.

The Nazis Party Rallies in Nürnberg

Nuremberg was in the geographical heart of pre-Second World War Germany. During the Weimar years, Nuremberg had excellent railway links to the rest of Germany and the easy logistics was probably the main reason for the Nazi Party’s decision to hold party rallies here in 1927 and 1929.

Nuremberg banned the Nazi Party rallies after crowd trouble at the 1929 rally. However, in 1933 the Nazis took national power in Germany and soon Nuremberg felt honored to have been chosen to become the permanent host of the by now annual party rallies. By then, the symbolic connection of Nuremberg to the old Holy Roman Empire of the German Nation was probably more important to the Nazis than the relatively easy transportation logistics.

The Nazi Party held six rallies in Nuremberg between 1933 and 1938. The 1939 rally with the motto “Party Rally for Peace” was scheduled to begin on September 2 but was cancelled without stating reasons on August 26. Clearly, that slogan was a bit too problematic even for the infamous Nazi propaganda machine.

Once in power, the Nazis decided to erect permanent structures in Nuremberg to host the annual party rallies. The vast Reichsparteitagsgelände (Nazi Party Rallying Grounds) designed by Albert Speer was under construction, using mostly slave labor, as late as 1945. The three most important constructions here are Kongreßhalle (Congress Hall), the Zeppelin Tribune, and the Große Straße (Great Road).

The Kongreßhalle (Congress Hall) at the Reichsparteitagsgelände in Nuremberg is the largest construction surviving from the Nazi era. This enormous hall was to have seated 50,000. The Kongreßhalle was never completed although parts of the exterior are in as good a condition now as it was in the 1940s – it was built, after all, to last a thousand years…

The Dokumentationszentrum Reichsparteitagsgelände (Documentation Center Nazi Party Rallying Grounds) is inside a small part of the Kongreßhalle. It is a good idea to visit this center first as it gives a very good explanation of the rallies as well as the layout of the land and sights still visible today.

The very informative Dokumentationszentrum Reichsparteitagsgelände (Documentation Center Nazi Party Rallying Grounds) has a large, if eerie collection of photos, video, audio recordings, and models give a very good overview of the party rallies as well as the Nazi regime in general. Six decades on, Goebbels’ voice still cuts like a knife.

The Nazi Party rallies were a logistical nightmare. The 1938 rally was attended by 1.6 million. In the documentation center are priceless comments on the inadequate toilet facilities, attempts of senior party members to enter the red light districts, and complaints that bars playing dance music were better attended than those relaying Hitler’s speech.

The Dokumentationszentrum Reichsparteitagsgelände (Documentation Center Nazi Party Rallying Grounds) is open daily from 9 am (10 am on weekends) to 6 pm. All the other structures are always open and freely accessible.

Behind the Congress Hall is the Große Straße (Great Road), a 2 km (1.2 mile) long ceremonial road build with 60,000 slabs of granite. This monumental road was to have been a central axis in the Reichsparteitagsgelände and in line with the Kaiserburg, once a premier residence of the Holy Roman Emperor in Nuremberg.

The American military used the Große Straße as a landing strip for planes after the war. Currently most of the Great Road is used as parking lot for the nearby modern conference center and sports stadium.

The Zeppelin Tribune was at the center of Nazi Party Rallies. Hitler addressed the party faithful from this 300 m (1,000 ft) long tribune. The main and side tribunes provided seating for 60,000 while the field itself had space for a further 100,000.

The American military blew the Swastika and other Nazi symbols off the tribune directly after the war.

The Reichsparteitagsgelände (Nazi Party Rallying Grounds) is to the south of Nuremberg’s old town. The terrain is easiest reached from the Hauptbahnhof (Main Station) on tram 6 or 8 – stop Dokumentationszentrum is directly in front of the Kongreßhalle.

Nuremberg was an important center during the Middle Ages and the old town of Nürnberg still has many interesting sights and excellent museums worth seeing. Transportation to Nuremberg is easy by road and rail while Nürnberg Airport (NUE) is increasingly used for flights from various European airports.

For More on Traveling to Nürnberg See Also: