Although a car is convenient, public transportation (either trains or buses) are available to most sights on the Romantic Road (Romantische Straße) in Bavaria, Germany. 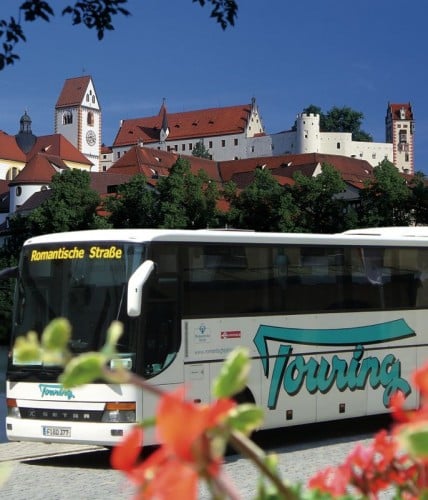 The Romantic Road (Romantische Straße) holiday route in Bavaria is for many visitors a top destination and highlight of a trip to Bavaria. This 350-km (220-mile) route has some of Germany’s most romantic sights. The Romantic Road is easiest traveled by private car but public transportation (trains and buses) are also available to most sights. Popular stops along the Romantic Road include medieval castles (Schloss Harburg), the fantasy Disney-line Schloss Neuschwanstein Castle, wall-encircled towns (Rothenburg ob der Tauber, Dinkelsbühl, Nördlingen), palaces (UNESCO-listed Residenz in Würzburg, Schillingsfürst), and churches (the UNESCO-listed Wieskirche).

Seeing the Romantic Road by Train

Public Buses on the Romantic Road

Many towns on the Romantic Route are connected by bus services. However, these local buses sometimes run only on weekdays or even only on school days making it sensible to double check schedules.

The following sections of the Romantic Route present major bus or public transportation headaches as there are no through service and long detours are required:

It may sometimes be better to use a taxi between some of these towns as detours can be very time consuming to cover often relatively short distances of the Romantic Road itself.

The Romantic Road Coach (previously Europabus) covers most of these towns again once per day from mid-April to mid-October (but does not stop in Schillingsfürt.)

Public Transportation on the Romantic Road in the Tauber Valley

The Liebliches Taubertal (Sweet Tauber Valley) is in the state Baden-Württemberg and the Bayern-Ticket, a fantastic discount ticket for travel on regional trains in Bavaria is therefor not valid. Trains run from Wertheim at the confluence of the Tauber and Main rivers to Weikersheim. Cross connections from both towns are available at least two-hourly to Würzburg.

Buses run frequently between Weikersheim and Creglingen. Public transportation options between Creglingen and Rothenburg ob der Tauber are limited and infrequent. Long detours by train via Würzburg or Shrozberg may be necessary – a taxi could be a better option.

Public Transportation on the Romantic Road in Romantic Franconia

Trains to Rothenburg ob der Tauber always require a transfer at Steinach, from where frequent connections are available to Würzburg, Treuchtlingen, and Ansbach. Trains from Nürnberg (Nuremberg) usually require a further transfer at Ansbach.

Frequent buses connect Feuchtwangen and Dinkelsbühl in less than half an hour. Buses between Dinkelsbühl and Nördlingen are available (45 minutes) most weekdays but not always on weekends.

Public Transportation on the Romantic Road in the Ries-Danube Region

The Ries-Danube region is the only part of the Romantic Road where railways regularly run alongside the holiday route. At least hourly trains run from Nördlingen via Harburg to Donauwörth taking half an hour.

Donauwörth has been an important railway junction for decades. Frequent connections are available to Augsburg as well as Ingolstadt, Regensburg, Treuchtlingen, Nürnberg (Nuremberg), and München (Munich).

Public Transportation on the Romantic Road South of Augsburg

Augsburg has excellent rail connections to the rest of southern Germany. Romantic Road towns with direct links to Augsburg include nearby Friedberg (by bus) and Landsberg an der Lech, which can be reached by at least hourly train in 50 minutes.

From Landsberg further south, public transportation links are again problematic. Schongau, Peiting, and Füssen can be reached by rail but are on different lines often requiring long detours. Buses between towns are generally available on weekdays but not on weekends. Transportation from say Landsberg to the Wieskirche can easily exceed three hours and require up to three transfers.

Fortunately, public transportation at the popular last stops of the Romantic Route is better developed. Füssen can easily be reached by rail from Munich (and with transfers from Augsburg and Landsberg). Buses marked Königschlösser run from Füssen to Schwangau to see Mad King Ludwig’s Disny-like fantasy castle Schloss Neuschwanstein.

A few buses per day are available from Füssen to the Wieskirche (Church in the Meadow) but double check return times – the Wieskirche is literally in the middle of nowhere.

Deutsche Touring’s Romantic Road Coach is ideal to visit minor stops on the Romantic Road. However, it runs only once per day in each direction from mid-April to mid-October. It is thus sensible to use the bus between stops where other public transportation options are limited and use regular buses or trains to see a few towns in a day.