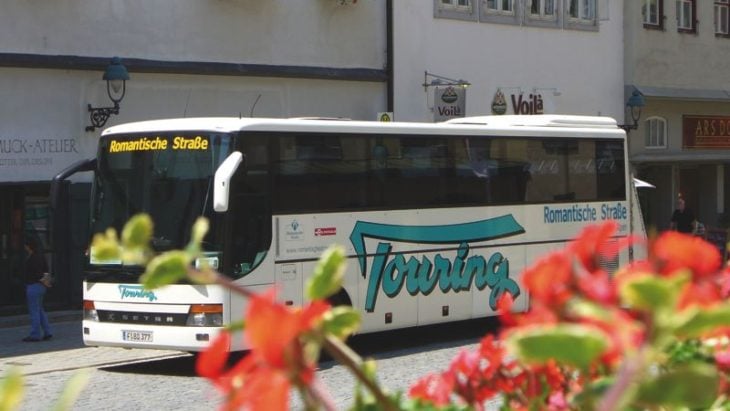 The Romantic Road (Romantische Straße) was founded in 1950 as a tourism promotion project. This massively popular holiday route has since become a top destination for visitors to Germany. It is hugely popular with bus parties from all nations – notice the Japanese road signs.

Although a car is the easiest and most convenient way to travel the full 350-km (220-mile) route, the Romantic Road can also be done on public transportation. The easiest way is on the Romantic Road Coach (previously Europabus), which has been operating along this route since its inception.

Southbound buses – i.e. Frankfurt to Füssen – currently do not travel via Munich. This gives travelers going all the way south more opportunity to travel in daylight. It is an easy train ride from Augsburg to Munich (30 minutes, at least twice per hour). The train ticket is usually included in the bus ticket. On the northbound buses, the coach still travels via Munich.

Stops on the Romantic Route Bus in Germany

From mid-April to mid-October, the Romantic Road coach departs daily at 8 am on the southbound route from Frankfurt am Main and at 08:00 from Füssen on the northbound route. The total traveling time is around 12 hours.

The 2016 routing of the Romantic Road Coach is as follows where the number in bracket indicate the minutes of a stop for photo or lunch break:

Some smaller stops are on request only, so do tell the driver where you plan to get off and make reservations if departing from smaller towns.

Tickets and Reservations for the Romantic Road Bus

Tickets may be bought online from Deutsche Touring and are valid for six months. Reservations for the Romantic Road Coach are not compulsory but advisable especially in the high season.

Bicycles may be transported for a small fee but reservations are required at least three working days in advance.

Currently, the full route fare is around €110 one-way (€160 return) – one-town distances can be as cheap as a euro. Tickets are valid for six months and the journey may be interrupted as frequently as desired. Children 4 to 12 pay half price while youths, students and over 60s receive 10% discount. Most rail passes give 20% discount.

Travelers receive a free audioguide (passport or €50 as deposit) that plays automatically when passing various sites. Bring own earphones or buy (€5) on the bus.

The Romantic Road is mostly traveled for the romantic small towns and sights along the route. It therefore makes little sense to travel the whole route in one go by bus. Only a few short stops are done by Romantic Road Coach en route. To explore more sights, it is necessary to stay over in towns and take the bus the following day.

In such case, it is worth exploring which Romantic Road towns can easily be reached by public transportation, as this will allow visitors to visit a few sights per day and not get stuck in towns where no further transportation is available to the next town other than expensive taxis.  A further alternative is to take an organized day trip, e.g. from Frankfurt am Main or Munich (München) to Rothenburg ob der Tauber as the main destination but further stops en route often included. Get Your Guide takes online reservations.