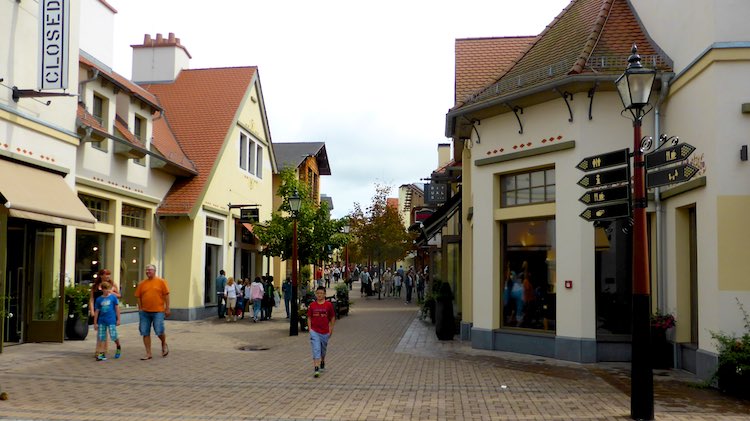 Wertheim’s medieval old town core with traditional half-timbered houses and church spires is on a narrow triangle of land between the confluence of the Main and Tauber Rivers. Wertheim’s castle ruins look down on the old town to complete Wertheim’s romantic panorama. Wertheim Village Outlet Shopping Mall is a premier destination in Germany for cheap discount brand-name fashion factory shops.

Why Wertheim is Franconian but not Bavarian

Although Wertheim is Franconian, Wertheim is not in Bavaria. Religion largely determined Wertheim’s destiny.

Wertheim’s history goes back to Carolingian times but Kreuzwertheim on the north bank of the Main received town rights only in 1009. A castle was erected on the easier to defend south bank during the early 12th century and the settlement that developed around it became the town Wertheim in 1306. Wertheim grew rich from road and river taxes.

The count of Wertheim accepted the Lutheran Reformation as early as 1524 but at the start of the Thirty Years’ War (1618-48), the county was split into the Protestant Wertheim and the Roman Catholic Kreuzwertheim. As a result, two centuries later at the Congress of Vienna, Kreuzwertheim became part of Roman-Catholic Bavaria while Wertheim joined the Protestant Grand Duchy of Baden. This division continues to the present with Wertheim despite its typical Franconian appearance and customs, officially not part of Bavarian Franken but rather in the German federal state Baden-Württemberg.

Starting from the confluence of the Main and Tauber, the first sight in Wertheim is the 37-m/115-ft-high Spitzer Turm. This tower dates from 1200 and was one the original 18 watchtowers in Wertheim. The old town is entered via the Maintor (Main Gate, where Main refers to the Main River rather than the premier entrance).

Wertheim’s Marktplatz (Market Square) has several typical Franconian half-timbered buildings – note the narrow (3-m/10-ft-wide) Zobel building from the early 16th century. Several interesting façades can be seen in the Münzgasse. The sandstone Engelsbrunnen (Angels Fountain) is the original from 1574.

In Rathausgasse note the Blaues Haus (Blue House). This remarkable builgind dates from 1593 and is the only known building painted with this rare paint made from cobalt-blue glass and oil.

The small Kilianskapelle (Chapel) is a Late Gothic double chapel (1469) and considered one of the most beautiful of its kind in Bavaria. The staircase adjacent to the chapel leads to the Burg (castle).

Across the road is the Stiftskirche (Protestant Church), a 1383 Gothic basilica on Romanesque foundations. The clock tower has two faces at different heights. The original one facing the Burg has only an hour hand while the golden one added in 1544, faces the town with the by then customary minutes’ hand as well.

The Glasmuseum, Mühlenstraße 24, tel 09342-6866, is in a half-timbered building from 1577. It has information and glass pieces on the 3,500-year history of glass production. Visitors are often allowed to produce their own pieces with the help of the resident glass blower.

The Wertheim Glass Museum’s opening hours are April to October, Tuesday to Friday from 10 am to  5 pm; weekends from 1 to 6 pm. Admission is €4.50.

The Wertheimer Burg (Fortress), tel 09342-913-238, was once the seat of the counts of Wertheim. The keep of the castle dates from 1100 while the bulwark is 15th century. It was the largest stone castle in southern Germany but following extensive damage during the Thirty Years’ War (1618-48) it now is one of the most picturesque ruins in Germany. The views from the top are absolutely worth the steep climb.

Opening hours of the Wertheimer Burg are daily from Easter to mid-October from 9 am to 10 pm, and mid-October to Easter from 10:30 am to 4 pm.

During the summer season, an hourly taxi service (€2) is available from the Spitzer Turm to the Burg. Alternatively, start the climb from the stairs next to the Kilianskapelle.

The Wertheim Castle ruins are frequently used as an open-air stage and to host various festivals. Classical music concerts are often held in the Kloster Bronnbach monastery.

Around 10 km (6 miles) upstream along the Tauber River is the former Cistercian monastery Kloster Bronnbach, tel 09342-39-596. The monastery was founded in 1151 and the Late Romanesque basilica consecrated in 1222.

In stark contrast to the austere structure is the Baroque interior of the church. The opulent Josephsaal (1726) is Baroque – being unheatably, it could only be used in summer. Below it is the winter refectory. Also worth seeing is the Romanesque cloisters and chapter house that were completed around 1300.

Kloster Bronnbach Monastery is open April to October, daily from 10 am to 5:30 pm, opening only at 11:30 on Sunday. During the winter season, opening hours are very much limited and most likely on Thursday only. Admission is €4.

In recent years, Wertheim has established itself as a prime center for outlet shopping. Wertheim Village Outlet Shopping, tel 09342-919-9111, is right next to the Autobahn A3 (exit 66). This factory outlet mall sells mostly brand named clothes. It has around 80 shops, mostly of high-end European and American fashion brands, including Bally, Calvin Klein, and Versace. A free shuttle bus is available from Wertheim town while shopping shuttles from Frankfurt are also available.

In Wertheim, Alfi Werksverkauf, Ferdinand-Friedrich-Strasse 8, Wertheim-Bestenheid, tel 09342-877-470, sells at discount prices household items including kitchen utensils, porcelain, and flatware from well-known German brands such as WMF, Silit, and Spiegelau. It also has a smaller alfi Outletshop in the old town area at Maingasse 22, 97877 Wertheim, tel. 09342-877-450.

Hotels and restaurants in Wertheim and other Spessart towns are reasonably cheap and offer a pleasant alternative to staying in larger and better-known towns. Nearby sights include half-timbered buildings in Miltenberg, Baroque Amorbach, romantic Schloss Mespelbrunn, and the Renaissance palace in Aschaffenburg. The region also has many opportunities for outdoor adventures.