Schloss Mespelbrunn in the Bavarian Spessart is an impossibly romantic castle surrounded by a wet moat. It is a popular day trip from Frankfurt am Main and easily reached by car. 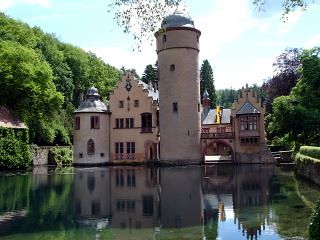 Schloss Mespelbrunn is a true jewel in the heart of the Spessart. It is a Wasserschloss – a castle surrounded by a water-filled moat. Due to its hidden location in a quiet valley, it has never suffered any war damage. It is small but its location is impossibly romantic making it a great day-trip destination or a brief stop for drivers traveling along the Autobahn A3 between Frankfurt and Würzburg.

Schloss Mespelbrunn, Schlossverwaltung, 63875 Mespelbrunn, tel 06092-269, is small but a great castle to visit. The castle is still a private residence and provides a great insight into life in a castle of yesteryear.

In 1412, the archbishop of Mainz donated Mespelbrunn to his forest keeper, Knight Haman Echter, who erected a small castle. The present Renaissance castle building is mostly from the mid-16th century. In 1648, the castle came through marriage to the count of Ingelheim and is still the primary residence of the family “Von Ingelheim genannt Echter von und zu Mespelbrunn”. 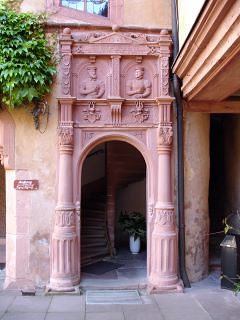 As a result, only the north wing of the Schloss Mespelbrunn Castle can be seen on compulsory guided tours, which includes the chapel and a number of reception rooms. Note the family shields above the door leading from the courtyard to the north wing – it provided the proof that the family was indeed of noble blood. (See photo.) The same level of proof for “Germanness” was required by the Nazis for government officials appointed in senior positions.

Although rifles and trophies are nailed to the wall or link to alarms, Schloss Mespelbrunn very much has a lived-in feeling and offers more insight to life in a castle than many other larger and more famous ones do.

The most famous person associated with Schloss Mespelbrunn Castle is Julius Echter von Mespelbrunn (1545-1617) who became bishop of Würzburg in 1573. He spearheaded the Counter Reformation in the area and erected several churches and other buildings in his bishopric in an attempt to visually illustrate how much better off the Catholic areas were in comparison to their Lutheran-Protestant neighbors. Echter churches are typified by their Late Gothic style and high, steep black-slate roofs even though the Renaissance was more fashionable at this stage.

Schloss Mespelbrunn Castle is open daily from Easter to October from 9 am to 5 pm. Admission is €3.50 and includes the compulsory guided tour, free to the castle grounds.

It is a ten-minute hike on a smooth paved road from the parking lot to Mespelbrunn castle.

Several restaurants are available next to the car park or at the castle itself.

Further popular sights in the Spessart-Main-Odenwald region include Amorbach (Baroque & Half-Timbered Meet Modern Art & Teapots), Aschaffenburg (Schloss Johannisberg, Pompejanum, and Stiftbasilika) and the half-timbered buildings in Miltenberg. Cheap restaurants and hotels are available in the region.