A Medieval Town along the Main River in Bavaria, Germany

Miltenberg along the Main River has some of the best half-timbered buildings – many now hotels, shops, and restaurants – in Bavaria, Germany. 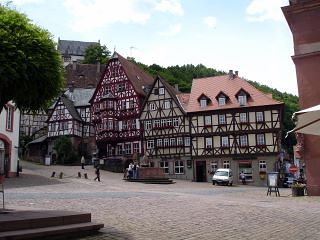 Miltenberg is a wonderfully beautiful little town that never suffered major war damage or town fires. Despite its lovely setting along a curve in the Main River, the main attractions are the wonderful half-timbered houses along its Haupstraße (Main Street) and the Mildenburg Castle ruins that towers over the old town. The half-timbered buildings of the Marktplatz (Market Square) form one of the most romantic settings in Germany.

Historic Miltenberg on the Main, Bavaria

Archeological finds from Celtic and Roman times indicated human settlement in the Miltenberg area as far back as a millennium BC but its written history is from the early 13th century onwards. Miltenberg’s golden age was the late Middle Ages when its strategic location on the trade route from Nürnberg to Frankfurt brought riches to the town.

As with so many other towns in the Franconia region, the Thirty Years’ War and the shift in trade routes spelled the end of Miltenberg’s wealth. The upside for visitors is that the town was too poor to remodel in more modern styles.

The main sights in Miltenberg are the well-preserved half-timbered houses that line the Hauptstraße. Walking from the new Rathaus at Engelsplatz along Hauptstraße it seems as if every block is lined by half-timbered houses more impressive than the previous – most are 16th century or older. Gasthaus zum Riesen (1590) served as drinking hall and restaurant for the nobility and claims to be the oldest of its kind in Germany. The Altes Rathaus (1379) is a sandstone building and used for various mostly cultural events.

Miltenberg’s Marktplatz (Market Square) with the Schatterloch is the most attractive part of the town and one of the most romantic settings in Germany. A Renaissance fountain (1583) is at the center of this triangular square but the surrounding buildings are even more impressive.

The Centgrafenhaus is partly from the 15th century while several buildings including the Alte Amtskellerei were built in the 16th century. The former Gasthaus Gülden Cron and the Renaissance tower gate are 17th century. By this time, Miltenberg’s wealth was clearly in decline with the red sandstone Rokokohaus (1750) near the Markt a rare sample of Rococo in this town.

The Museum der Stadt Miltenberg (Local History), Hauptstraße 169-175, tel 09371-404-153, is housed inside the former Amtskellerei (Official Brewery) on the Markt. It has interesting exhibitions on local history that dates back to Roman times with some evidence of Celtic settlements. The prime exhibit is the Toutonenstein – a red sandstone needle that presumably dates from Celtic times but inscribed with Roman letters.

The hike to the Mildenburg Castle starts from Markt – follow the steep incline through the tower gate. The castle was originally erected in 1225 by the archbishop of Mainz to secure his easternmost territories against the bishop of Würzburg. The 27-m/88-ft-high keep is from this period although most of the palace is 14th century. The views are worth the steep hike.

The Mildenburg castle courtyard and keep are open May to end October from Tuesday to Friday from 2 to 5:30 pm, weekends from 1 to 5:30 pm. Admission is €1.

Miltenberg and other Spessart towns have pleasant hotels and restaurants. Other popular sights in the Spessart include Aschaffenburg, Schloss Mespelbrunn, Amorbach, and Wertheim with castle ruins at the confluence of the Main and Tauber Rivers.