Renaissance Schloss Johannisberg and the Pompejanum Are Top Attractions

The top sights so see in Aschaffenburg in Bavaria, Germany, are the Renaissance Schloss Johannisberg (Palace) and the Pompejanum on the banks of the Main River. 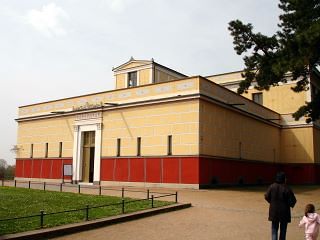 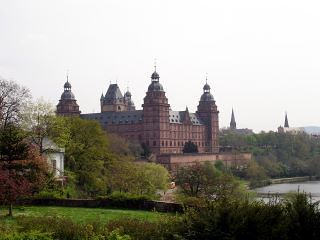 Aschaffenburg with a population of 70,000 is by far the largest town in the Spessart region. The area was probably settled in Celtic times but the earliest written reference is from the late Roman period in the 4th century. From the 10th to early 19th century, Aschaffenburg belonged to the Archbishopric of Mainz and the palace here served as a secondary residence. After the Napoleonic wars, it became part of Bavaria – mostly to prevent Prussia from expanding southwards. The main sights are the magnificent Late Renaissance Schloss, the Pompejanum, while the Stiftkirche and Park Schönbusch are also worth seeing.

The magnificent Renaissance Schloss Johannisberg, Schlossplatz 4, tel 06021-386-570, Schloss Johannisberg, Aschaffenburg, Bavaria, Germany is the symbol of Aschaffenburg. It is a huge, square building with four wings surrounding a central courtyard. It was erected between 1605 and 1614 to designs by Georg Ridinger following the destruction of the original medieval castle by fire. The original medieval keep was incorporated in the new design and ironically, this was the part of the castle that sustained the least damage from air raids in 1945 when much of the old town of Aschaffenburg was destroyed.

The new palace was a secondary residence of the archbishop of Mainz, had no defensive purposes, and served as example for the palaces of the nobility that were constructed all over Germany during the 17th century. In contrast to the exterior, which was restored to its full Renaissance magnificence following the Second World War, most of the interior is modern. Schloss Johannisberg is one of the most important Renaissance buildings in Germany.

Schloss Johannisberg houses three collections – all covered by the same admission ticket. The Staatsgalerie (National Gallery) has a fine collection of paintings by old German and Dutch masters with the works from the Lucas Cranach studio especially noteworthy. A few of the formal reception rooms have been restored and is furnished mostly in the Classical style of the late 18th century.

Much of the Schlosskapelle (Palace Chapel) with a very impressive Renaissance altar by Hans Juncker is original. Also on display is the world’s largest collection of cork architectural models. These detailed scale models of ancient Roman ruins were created at the end of the 18th century by the court baker, Carl May.

The Schlossmuseum is a local history museum with art and furniture related to Aschaffenburg. The 48 bronze bells of the carillon play daily at 9:05 am, 12:05 pm, and 5:05 pm.

The Schloss is open Tuesday to Sunday from April to September from 9 am to 6 pm and October to March from 10 am to 4 pm. Admission to all museums in Schloss Johannisberg is €4. The small garden is open daily for free during daylight hours.

A combination ticket for Schloss Johannisberg and the Pompejanum is €6. 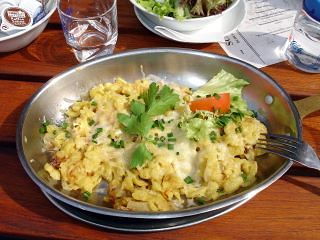 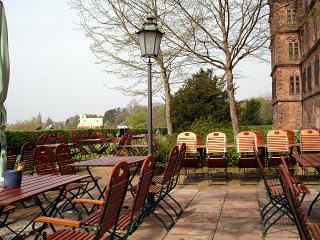 The Schlossweinstuben, tel 06021-12440, is inside Schloss Johannisberg and has several rooms ranging from rustic to elegant. The outdoor seating with views of the Main and the Pompejanium is very pleasant too. Food is unashamedly Franconian and the wine list very long.

The Pompejanum on the Banks of the Main River in Aschaffenburg 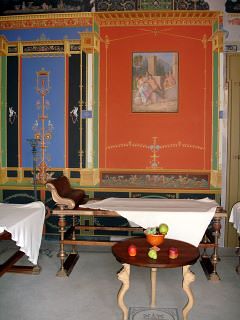 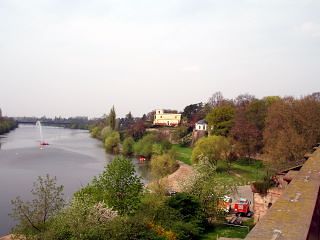 In the palace gardens, a few minutes stroll down river is the Pompejanum, tel 06021-218-012. Bavarian King Ludwig I was so impressed with the excavation of Pompeii that he had a Roman villa erected during the mid-19th century complete with mosaic floors, painted walls and ceilings, copies of statues and furniture, and a typical kitchen.

The Pompejanum was severely damaged in 1945 and restoration work was only completed in 1994. It is surrounded by a garden with typical Mediterranean plants serving as proof that this area is the driest part of Bavaria.

The Pompejanum is open Tuesday to Sunday from April to mid October from 9 am to 6 pm. Admission is €4.

A combination ticket for Schloss Johannisberg and the Pompejanum is €6.

Aschaffenburg is the center of cultural activities in the Spessart with several excellent venues. A wide variety of performances is on offer ranging from classical theater to musicals, popular to religious music. The Schloss and Stiftskirche are sometimes used as historical venues for concerts.

Further top sights in Aschaffenburg include the Stiftkirche and Park Schönbusch. Aschaffenburg and other Spessart towns also have some fine restaurants and hotels with pleasantly low prices.