Trains, Buses, and Flying to Straßburg from London, Paris, and Germany

Transportation to Strasbourg in France is fast but not always cheap on trains (TGV and ICE), Eurolines buses, and flights (to SXB) from London, Paris, Germany, and European cities. 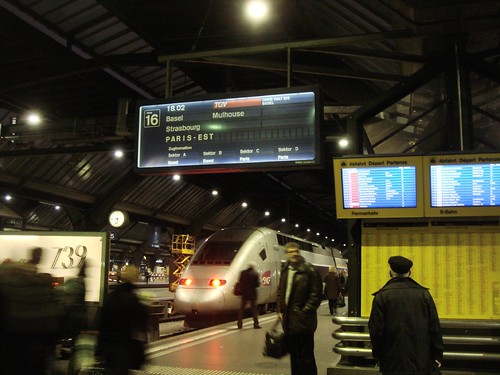 Transportation to Strasbourg in Alsace (Straßburg in Elsaß in German) on the French-German border has not always been particularly fast or cheap. The French high-speed TGV trains only recently started services to Alsace to bring Strasbourg within easy two hour reach from Paris. Flights to Strasbourg Airport (SXB) are relatively expensive and priced with the business traveler in mind. Leisure travelers, especially on intercontinental flights, may often find flights to nearby airports in Germany and Switzerland cheaper and ground transportation from these centers easier than to travel through airports in Paris.

By Fast Train to Strasbourg in France

Being right on the border, travelers can use both German or French trains to reach Strasbourg. The new TGV Est line gives fast access from Paris but also from Stuttgart and Munich while local trains are often the best option when traveling in Alsace itself. The German high-speed Inter-City-Express (ICE) trains run frequently on the important route to Switzerland with good connections to Strasbourg too.

Getting to Strasbourg on French Trains

Since 2007, it has finally been possible to travel on high-speed French TGV trains to Paris. Journey times from Paris to Strasbourg has almost halved to only 2h20 with below two hours coming in the future. Some TGV trains continue into Germany to Karlruhe (45 minutes) and Stuttgart 1h15. Some TGV trains also continue to Switzerland (Basel).

Travelers from London St. Pancras International Station can travel to Strasbourg on the Eurostar and TGV trains (transfer in Paris or Lille) in around six hours.

TGV Rhin-Rhôn for Travel from Strasbourg to Lyon

Trains from Strasbourg to Lyon currently take around 4h30. A new TGV line will connect the Rhine and Rhone Valleys from 2012 to speed up traveling time between Strasbourg and Lyon to just over two hours while Marseilles will be less than five hours away.

Local trains generally give the best connections and best price-performance balance when traveling in Alsace. For travelers to Strasbourg, two local trains are especially useful:

Trains from Strasbourg to Bâle (Basel in Switzerland) via Sélestat, Colmar, Mulhouse, Saint-Louis take just less than 90 minutes and is a good way to connect to cheap flights going to Basel-Mulhouse-Freiburg Euro Airport (BSL). The more expensive TGV trains are only marginally faster on this route.

Local trains from Strasbourg to Offenburg in Germany takes half an hour and are useful for connections to some ICE trains.

Getting to Strasbourg on German Trains

German Inter-City-Express trains do not run to Strasbourg itself but the Deutsche Bahn railway line running on the German side of the Rhine (Frankfurt – Mannheim – Karlsruhe – Basel) is very busy. Offenburg is the closest ICE train station to Strasbourg but not all ICE trains stop here.

Frankfurt International Airport (FRA), the closest major international airport to Strasbourg, can be reached by train in just over two hours. Transfers are always required – usually at Karlsruhe for TGV trains or Offenburg if local trains are used.

Traveling by Bus to Strasbourg in France

Trains are usually the most convenient way to get to Strasbourg from other European cities but bus services are also available.

For cheap flights to Strasbourg, it is generally best to travel to Karlsruhe/Baden-Baden Airpark (FKB) or EuroAirport Basel-Mulhouse-Freiburg (BSL, MLH, EAP).

« Travel from England to Bavaria by Train or Bus
Top Sights to See in Aschaffenburg, Germany »
Home » France » Getting to Strasbourg in Alsace, France