Cheap Flights and Low-Cost Budget Airlines at SXB in Alsace

Flights to Strasbourg Airport (SXB) in Alsace, France are mostly not cheap as low-cost budget airlines do not fly to Alsace. Trains and other airports offer cheaper options. 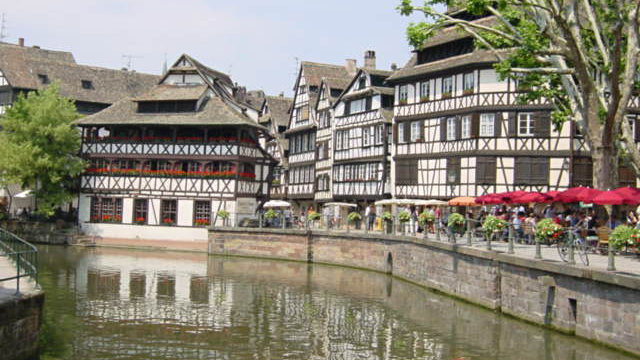 Strasbourg Airport (Aéroport de Strasbourg Entzheim – SXB) is conveniently located only around 10 km to the southwest of Strasbourg. SXB is only the seventh busiest airport in France and thus serves only a limited number of destinations. Low-cost budget airlines do not fly to Strasbourg and as a result, flights are often expensive and aimed at the business rather than the leisure traveler. For cheap deals and bargain flights, it is often necessary to fly via Basel or to take the train.

Use major internet reservation services to compare prices, as deals may be available on quiet days. Paris to Strasbourg is often an expensive flight but the expense may be minimal when the flight is part of an international connecting flight routed via Paris.

Flights to Strasbourg Airport in Alsace (SXB) on Air France

Air France (AF) and Air France subsidiaries and partners have by far the largest number of flights to and from Strasbourg Airport.

A declining number of further airlines have flights to Strasbourg Airport (SXB) but the lack of competition keeps airfares generally high:

The train ride to the airport is around 10 minutes. Trains operate mostly four times per hour during weekdays but services are significantly less frequent on Saturdays and especially on Sundays..

Due to the limited number of destinations and generally high prices of tickets, alternative transportation options to Strasbourg, including the fast TGV trains are often a better choice. Intercontinental travelers may also want to note that it is often faster to fly via Frankfurt International Airport than via Paris when traveling by air to Strasbourg. Low-cost airlines have flights to nearby Basel-Mulhouse-Freiburg EuroAirport and Karlsruhe Baden-Baden / Baden Airpark (FKB).