The top sights in Strasbourg, France include the High Gothic cathedral, the romantic half-timbered houses in La Petite France, the Maison Kammerzell, and great museums. 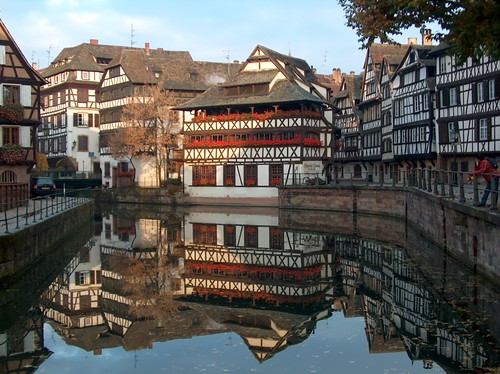 Hotel prices in Strasbourg vary according to activities of especially the European Union institutions – when no major meeting and conferences are staged, luxury hotels in especially the outskirts of the town center can be very cheap. Hotels in smaller Alsace towns are also very pleasant especially when driving and not relying on public transportation. Use major internet hotel reservation services to compare prices and try and determine when hotels are full – huge savings can be had by traveling a week earlier or later than major events.

The magnificent High Gothic Cathedral of Our Lady (Cathédrale Notre Dame de Strasbourg) is the top tourist attraction in Strasbourg. The famous, off-center spire was for two and a half centuries the highest construction in the world and can be seen on the horizon long before travelers reach Strasbourg itself.

The High Gothic western façade of Strasbourg cathedral is a masterpiece of thirteenth-century art and architecture. The intricately carved reddish-pink sandstone is locally sourced and particularly impressive when illuminated by the late afternoon sun.

The top attractions inside the cathedral are the magnificent, medieval stained-glass windows and the 18 m (60 ft) high, mostly Renaissance, Strasbourg astronomical clock.

The Maison Kammerzell on the Place de la Cathédrale right in front of the cathedral is one of the loveliest medieval-Renaissance houses in France. The ground floor is from the fifteenth century while the more interesting half-timbered floors, with carved cornerstones and window frames, are sixteenth century. The Maison Kammerzell now houses a pricy restaurant with great views of the Strasbourg cathedral.

Next door is the Musée de l’Oevre Notre-Dame with many original statues from the cathedral – for protection many statues at the cathedral are copies. This essentially Gothic building but with a Renaissance appearance has further collections of medieval, religious art.

Several further museums are nearby. The History Museum (Musée Historique) and the huge fourteenth-century Ancienne Douane (Former Customs House) are on the banks of the Ilz River nearest to the cathedral. On the opposite bank of the Ilz is the Musée Alsacien with exhibits of arts and crafts from the Alsace region.

The most picturesque part of Strasbourg is the postcard-perfect La Petite France (Little France) on islands in the Ilz River. Endless half-timbered buildings here have complex wood-frame structures and balconies sporting colorful geraniums during summer. Many restaurants, bistros, and cafés here have marvelous views in addition to appealing food.

The Ponts Couverts (Covered Bridges) in Strasbourg are a series of bridges over the four arms of the Ilz River just south of La Petite France. Three watchtowers survived from the original medieval town defenses of Strasbourg. The best views of the bridges and old town are from the terrace at the Grand Ecluse dam.

Several transportation options are available when traveling to Strasbourg from Europe. Flying to Strasbourg is often an expensive option but may be of interest to intercontinental travelers with connecting flights from other European capitals.