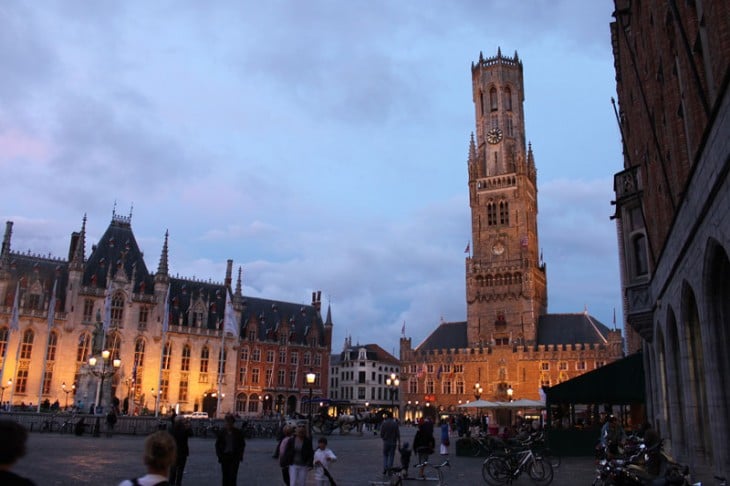 Belgium may be a small country but it has been at the geographical heart of trade and commerce in Western Europe for centuries. Belgium is rich in cultural sights and no less than nine sites have been inscribed on the UNESCO World Cultural Heritage List since 1998. The Belgian sites on the list range from prehistoric mines to Art Nouveau architecture.

From the Middle Ages onwards, Beguine convents (béguinage in French, begijnhof in Dutch) were places of safety for unmarried women and widows – similar institutions were used in other parts of Europe too in a time when unmarried women found themselves with very few legal rights.

The oldest Flemish beguine convents, which operated like small enclosed towns, were founded during the twelfth century. By the early sixteenth century, around a hundred convents were in operation, of which around 25 survived. The former convent buildings are now mostly used as cultural centers or retirement homes. Famous beguine convents are in Bruges and Antwerp.

La Grand-Place in the Center of  Brussels

La Grand-Place (Grote Markt in Flemish / Dutch) is the huge former market square in the heart of old town Brussels. The Grand Place is one of the grandest squares in Europe.

The largest building on the Grand Place is the Gothic Hôtel de Ville (Town Hall) of Brussels. The rest of the the square is lined by mostly late-seventeenth-century, Baroque guildhalls, which now host mostly restaurants, exclusive shops, and the odd museum.

La Grand Place in Brussels was added to the UNESCO World Cultural Heritage list in 1998.

The Four Hydraulic Boatlifts on the Canal du Centre, Belgium

The hydraulic boatlifts in La Louvière and Le Roeulx (Hainault region) in Belgium are engineering masterpieces from the late-nineteenth, early-twentieth-century industrial period. These boatlifts on the Belgian Canal du Centre are the only boatlifts from this period still in original working condition.

The four hydraulic boatlifts on the Canal du Centre were added to the UNESCO World Cultural Heritage list in 1998.

The Historic Belfries of Belgium and France

Belfries (belfort in Dutch, beffroi in French) were civilian towers erected to symbolize the wealth and power of towns, as oppose to the towers of church spires and the keeps of the nobility. These belfries, which are typical of Belgium and Northern France, were built between the eleventh and seventeenth century.

Presently, 23 French and 33 Belgium belfries are on the UNESCO World Cultural Heritage list (inscribed in 1999 and list expanded in 2005).

The Horta Museum is housed in the Maison and Atelier Horta. In this building, Victor Horta personally designed from the building to door hinges and wall decorations.

Historic, medieval Bruges (Brugge in Flemish / Dutch) is one of the most popular tourist destinations in Europe. During the Middle Ages, Bruges was a major commercial and cultural center and at the heart of western European trade.

Wars, changing political alliances, and above all a change in trade routes impoverished Bruges after the Middle Ages. The town became simply too poor to rebuild in more modern styles and as a result is now considered a superb example of medieval town architecture.

The belfry and beguine in Bruges were inscribed on the UNESCO World Heritage list previously but in 2000 the historic town center was listed separately too.

The Neolithic flint mines at Spiennes in the Mons region are the oldest in Belgium and amongst the oldest known mines in the world. Flint has been mined here as early as the late fifth millennium BC. Deep shafts sunk at these mines at Spiennes show that pre-historic man had sufficient knowledge of geology and technology to extract high-quality flint from deep underground.

Neolithic flint mines at Spiennes were added to the UNESCO World Cultural Heritage list in 2000.

The Cathedral of Our Lady (Notre Dame) in Tournai is an extraordinary fine example of Romanesque and Gothic church architecture. The church has five unequal towers and large nave (134 m/ 440 ft), which were built during the twelfth century in a late Romanesque style. The choir, which was rebuilt during the thirteenth century, is pure Gothic in style.

Cathedral of Our Lady (Notre Dame) in Tournai was inscribed on the UNESCO Word Cultural Heritage list in 2000.

Plantin-Moretus House-Workshops-Museum Complex in Antwerp was added to the UNESCO World Cultural Heritage list in 2005 as a fine example of the living, working, and commercial environment of a 16th to 18th century European city family enterprise. The complex belonged to the Plantin printer-publisher family and has numerous early book printing machines.

Completed in 1911, the private residence of banker Adolphe Stoclet is an excellent example of a Gesamtkunstwerk  by the Viennese Secessionist movement. The house represents a turning point in the Art Nouveau and foreshadows the Art Deco and Modern. The Stoclet House was designed by Josef Hoffmann and feature art and fixtures by other Secessionist artists including Koloman Moser and Gustav Klimt. Added to the UNESCO list in 2009.

Four well-preserved coal mining sites from the nineteenth and twentieth centuries that show the utopian architecture from the early industrial era in Europe. The Grand-Hornu, Bois-du-Luc, Bois du Cazier and Blegny-Mine sites show a high degree of integrity, since lost at the other numerous former collieries in Belgium. Theses sites were inscribed on the UNESCO list in 2012. (B080508)