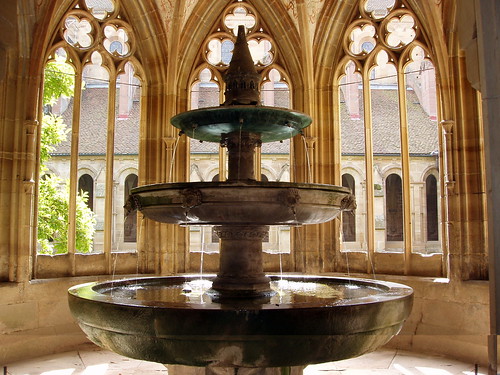 Cistercian Kloster Maulbronn is the most complete and best-preserved medieval monastery complex in Germany. This Romanesque-Gothic building estate is a great stop when traveling near Karlsruhe, eg from Frankfurt to Stuttgart, as well as a great day-trip from Baden-Baden and the northern Black Forest.

The Cistercian Maulbronn Monastery in Germany

The Cistercians started building the Maulbronn Monastery in 1147 according to the strict rules of the order. Both monks and laity worked in the monastery complex but the two groups were strictly divided with separate dining halls, accommodation facilities, and even physical separation in church.

Often more lay brothers than monks worked in medieval monasteries. In Kloster Maulbronn that can still be observed today – the laity’s refectory (Konversenrefektorium) is the larger. This large Romanesque hall is now used for concerts and receptions. The refectory of the monks (Mönchsrefektorium) is clearly smaller and in the more “modern” Gothic.

The Cistercians lived and ate modestly and banned ostentatious decorations even from the church. The present-day monastery complex with its empty rooms and bare walls reflect the sober atmosphere that must have existed here even when the monastery was in full use.

The Maulbronn abbey church is typical Cistercian Romanesque in style and lacking a tower. Most of the church was completed during the early years of the monastery’s foundation. Pure Gothic elements, including the vaulting, were added later. The most interesting part of the exterior is the Paradise Portal (1220) at the west of the church.

The interior of the church is fairly bare as the Cistercians preferred it. In addition to the fragments of fifteenth-century wall paintings and the carved choir stalls, note the 1473 stone crucifix where both Christ and the cross were cut from a single stone.

Cloisters played an important role in medieval monasteries and the Gothic cloisters at Maulbronn are in a particularly good condition. The east and south wings were completed early in the thirteenth century while the rest is almost a century newer. The Gothic Brunnenhaus, which houses the fountain, has original ceiling paintings from 1511.

Kloster Maulbronn was secularized after the Lutheran Reformation in the early sixteenth century. The Duke of Württemberg claimed Maulbronn for himself and erected a Renaissance hunting palace in the grounds.

In contrast to most monastery complexes in Germany, the full complex at Maulbronn was preserved including the buildings used by the order for economic activities. These buildings are currently used as city government buildings and a small museum but most still have purely commercial purposes including a restaurant, souvenir and art shops, and boutiques.

The monastery complex at Maulbronn was wall-enclosed and this wall survived to the present. Most of this complex can be accessed freely, admission is charged only for the church with cloisters and the main abbey buildings.

Opening hours of Kloster Maulbronn Monastery are from March to October, daily from 9:00 to 17:30 and from November to April from Tuesday to Sunday from 9:30 am to 17:00

Kloster Maulbronn is just to the north of the Black Forest, 30 km to the east of Karlsruhe near major autobahn connections. Maulbronn is easiest reached by private car.