Use Eurostar, Thalys, ICE and Night Sleeper Trains from England to Germany 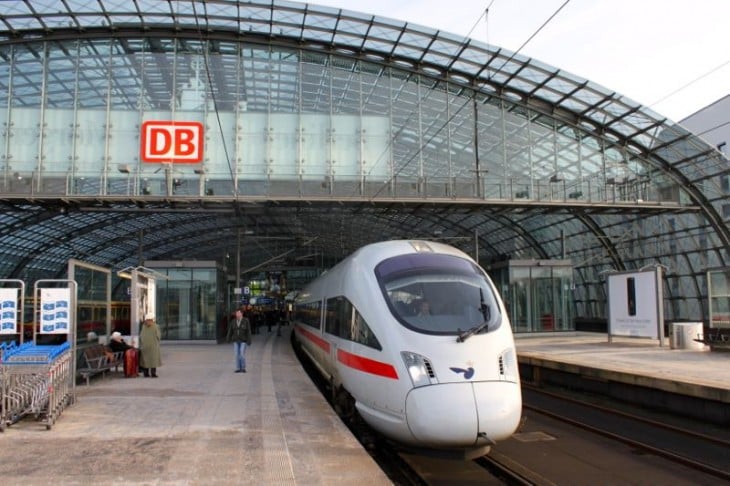 Trains and buses are clearly slower than flying when traveling between London and Berlin. However, a sharp decrease in the number of flight and indeed the number of low-cost airlines flying between England / Britain and Germany means that prices have risen and trains and buses offering stronger price competition than even a few months ago. Trains from London to Berlin take at least ten hours and buses / coaches around 18 hours.

Fast Trains from London to Berlin (Germany) via Brussels

The fastest and most logical train routing from England to Germany starts in London St Pancras International Station on the Eurostar and continues via Brussels to Germany. Currently, no direct ferries connect Britain and Germany and ferries going via the Netherlands, France, or Belgium generally do not provide connections to fast train services to Germany.

Only Eurostar trains from London stop at Brussels Midi Eurostar station – all other long-distance trains stop at the regular Brussels Midi station, which is around a 15-minute walk away. Note check-in times for Eurostar trains – usually half an hour. Other trains may be boarded up to departure time without restrictions or special security checks.

Cheap Fares on Trains from London to Berlin

Different discounts are available to flexible travelers. The cheapest return fares from London to Berlin are currently around €160 / £130 for daytime trains and as low as €125 / £100 for night train journeys from Belgium to Germany.

It is often necessary to book Eurostar and German Railways tickets separately to get the best deals but in such cases, onward journeys are not necessarily guaranteed and tickets honored when a delay leads to a missed connection.

RailEurope has now started to give online fares for journeys from the UK to Germany and virtually all of West Europe. This is great for planning and one-way journeys but the special deals are often only available if booked directly at Eurostar and Deutsche Bahn.

Most international rail journeys require a physical ticket, which forces travelers to buy from the agent in the country of residence. Rail Europe has representatives in many countries including Rail Europe (USA) and

The City Night Liner, Thalys TGV, and Eurostar trains require reservations while virtually all ICE trains can be boarded without prior seat reservations.

Train Connections from Brussels to Berlin

Train passengers from London to Berlin have several options to continue into Germany from Brussels in Belgium. Journeys on regular day-time trains require a further transfer in Cologne Main Station (Köln Hauptbahnhof) while direct night sleeper trains are available from Brussels to Berlin.

High-speed trains – either Thalys TGV or Deutsche Bahn’s Inter-City-Express (ICE) trains – run regularly between Brussels and Cologne in just over two hours. It is an easy transfer in Cologne to frequent ICE trains running to Berlin in four hours. The fastest day-time train journeys from London to Berlin take around ten hours.

Night sleeper trains from Brussels to Berlin offers a viable alternative to regular daytime trains. The City Night Liner (CNL) trains are modern with luxurious options and can be surprisingly cheap, especially for travelers willing to tough it out in a sleeper seat.

City Night Liner (CNL) trains connect Brussels Midi and Berlin without further transfers. Travelers from London should leave London St Pancras station at the latest at 19:30 to catch the City Night Liner in Brussels shortly before midnight and arriving in Berlin at 8 am. The return City Night Liner departs Berlin at 21:26 to reach Brussels at 6 am allowing passengers to be in London before 8 am.

By Euroline Bus / Coach from London to Berlin

Buses / coaches remain a remarkably cheap way of mass transportation and continue to offer alternatives to trains and flying for travel between London and Berlin. The around 18-hour journeys can be exhausting though but can be price competitive.

Special one-way fares for bus travel between London and Berlin can be as low as €44 / £35 while the normal fare is €90 / £70 (€162 / £130 return). Reservations are essential and can be made via Deutsche Touring, Berlin Linien Bus, or National Express Eurolines.

Trains and buses are clearly much slower than flying when traveling between Berlin and London but the recent decline in the number of flights between Berlin and Britain meant that prices have risen too. On shorter journeys, such as London to Cologne (Köln) trains can be both time and price competitive while on longer journeys such as London to Bavaria (Munich) flying remains clearly the faster option.