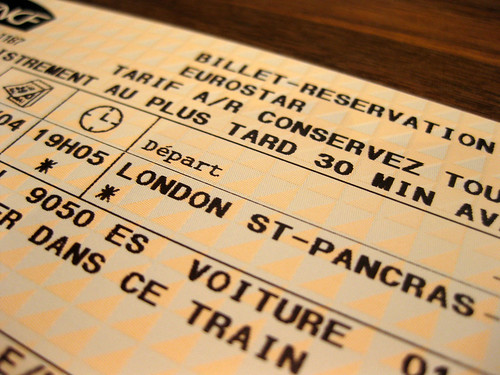 A sharp decline in direct flights on low-cost airlines between the United Kingdom (UK) and Germany and fewer cheap tickets on budget flights mean bus and train travel are increasingly popular alternatives. Travelers from London can take trains (Eurostar, TGV, ICE, and City Night Line) and buses (National Express / Eurolines) from England to Southern German cities such as Stuttgart in Baden-Württemberg and Munich (München) in Bavaria. Traveling time from London-St Pancras International Station to München Hauptbahnhof can be just shy of ten hours.

One-way fares from London to any destination in Germany can be as low as €49 when using Eurostar and Deutsche Bahn trains only.

Travel by Train from England to Bavaria

Train travel between the United Kingdom and Germany can be price competitive especially during the busy traveling periods when train and bus prices are less likely to increase compared to the rapid rise in air fares when planes are nearly fully booked. Train travel from London to Cologne (Köln) can be time competitive too but to other cities and regions train and bus travel can be much slower although many prefer the carbon neutral promises of Eurostar trains and the general position of trains being more environmentally friendly ways to travel (at least when the train is reasonably full.

Railway passengers from London to Stuttgart and Munich should bear the following in mind:

The two most sensible routings when traveling from London to southern Germany is either via Paris or via Brussels and Cologne (Köln). The shortest distance is the routing via Paris but much time can be lost by the need to transfer in Paris from Paris du Nord station (Eurostar) to Paris de l’Est station (TGV to Strasbourg and Stuttgart). As a result, overall traveling times are surprisingly similar.

Traveling by train England to Southern Germany via Paris commonly require two or three transfers but occasionally only a single transfer in Paris is required (plus a change or gare!). The transfer required in Paris generally have the largest influence in the overall travel time. From London St Pancras International to München Hauptbahnhof usually takes around ten hours by train. The fastest journey is 9h36 when leaving London at 06:55 am.

From Paris Gare de l’Est, the French TGV (Train à Grande Vitesse) high-speed trains run to Stuttgart (occasionally all the way to Munich) via Strasbourg in just over four hours. For trains not continuing all the way to Munich, it is necessary to transfer in Stuttgart to the German Inter-City-Express (ICE) high-speed trains that reach Munich Main Station (München Hauptbahnhof) in 2h20.

Routing a railway journey from London to Munich and Stuttgart via Belgium and Cologne is more logical than it may seem at first glance. It is not the most direct route but the way high-speed railway lines run in Europe, it is often the fastest way. The fastest railway journey from London to Munich follow this routing – 9h31 when leaving London at 7:00 am.

This routing takes the Eurostar train from London St Pancras International Station to Bruxelles Midi / Brussels South / Brüssel Süd Eurostar Station. From Brussels, take a French Thalys TGV or Deutsche Bahn ICE to Cologne (Köln) or Frankfurt. At least one further transfer will be needed in one of these German cities.

Another reason to take note of this routing is the London Spezial deal offered by Deutsche Bahn. When crossing the German-Belgium border by ICE train only and then the Eurostar to London, one-way fares for advance bookings from anywhere in Germany to London (or return) can be as low as €49 (or €99 in first class). This deal is not valid on TGV Thalys trains.

It is also possible to departs from London St Pancras International station on the Eurostar to either Paris or Brussels and continue from either station on an overnight sleeper train to Stuttgart or Munich. A good night sleep is possible especially when booking more luxurious accommodations.

The German City Night Line (CNL) trains are modern, luxury sleeper trains. CNL trains have many different comfort classes. The best deluxe compartments have private showers and toilets, while passengers in cheaper sleeper compartments with four to six beds have to go down the aisle to shared facilities.

National Express / Euroline Buses from London to Stuttgart and Germany

National Express Eurolines have a few buses per week from England to Southern Germany. Although these coaches are fairly comfortable, travel times can be uncomfortably long.

The bus journey from London to Munich takes just over 20 hours, two hours faster on the return (mostly a setting the clock back gain). Traveling times From London to Stuttgart are three hours less and to Ulm 90 minutes less than to Munich. It is usually necessary to change coaches in Brussels.

See also Travel by Eurolines Buses from the UK to Germany for more updated information on coaches traveling from London to Germany during the winter 2011 / 2012 season.

Flying from the UK, especially for travelers departing far from London, is still the fastest way by far to travel to Bavaria and southern Germany. On railway journeys from London to Cologne (Köln), high-speed trains can be both price and time competitive compared to low-cost airlines.

« Top Luxury Day Spas in Baden-Baden, Germany
Getting to Strasbourg in Alsace, France »
Home » Germany » Bavaria » Munich » Travel from England to Bavaria by Train or Bus