National Express Eurolines offers cheap bus services from London and other cities in Britain to German cities such as Berlin, Frankfurt, Munich, Cologne, and Düsseldorf. Coach travel from London to Germany is often far cheaper than trains and flying. 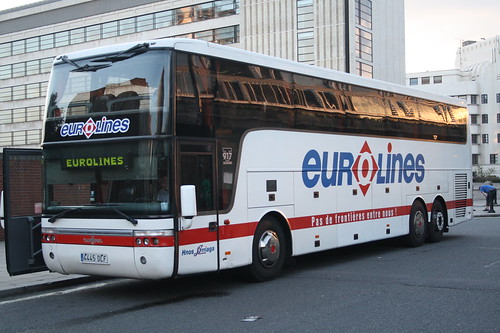 The cheapest way to travel from Britain to Germany is often by bus. Buses may not be the fastest but claims to be most environmentally friendly and lowest stress way from the UK to Europe. During the winter season, National Express Eurolines operates bus services from London to German cities including Berlin, Dresden, Frankfurt am Main, Munich, Nuremberg, Hamburg, Bremen, Cologne, Aachen, Düsseldorf, and Dortmund. National Express offers very cheap connection bus rides (£15 return!) from anywhere in the UK to connect to Eurolines buses from London to Europe.

During the winter season – November to March – National Express Eurolines operates six basic routes from London Victoria Coach Station to Germany. The coaches go from the UK to the following German cities:

Most of the coaches from London to Germany travel via the Channel Tunnel (Eurotunnel in Eurolines speak) and stop at Hythe in England. The routes to Frankfurt (via Cologne), Nürnberg, and Dortmund mostly use the P&O Dover to Calais ferry and buses then usually also stop en route in Britain at Dover and Gillingham.

The Eurolines buses usually run three times a week between London and Germany, except for the Frankfurt (via Cologne and Aachen) route that operates daily during the winter. Further connections may be available requiring a bus change in Brussels.

Currently, Eurolines passengers traveling from London to Europe may add a return trip from anywhere in Britain to London Victoria Coach station on National Express for only £15 return.

Saving with Eurolines Coaches on Travel from the UK to Germany

Buses cannot compete with planes or trains on speed but special deals make coach travel often cheaper than the railways or flights. Travel at short notice is often much cheaper when going by bus rather than booking a flight.

National Express Eurolines has an easy to use online booking service that clearly shows what special deals will be available on the day of intended travel. Return tickets are much cheaper than two singles.

Some special fares on Eurolines buses include:

Further savings are available on standard, flexible, and on the day travel fares only:

Eurolines passengers are usually allowed two medium suitcases free of charge – on the Berlin route often only a single suitcase may be taken.

Check-in times in London are an hour before scheduled departure times and 30 minutes from most European destinations.