Save on Flight, Train, and Bus Tickets from London, England

Travel between Britain and Germany is easy and cheap on low-cost flights, fast trains, and cheap buses between London (England) and Berlin, Cologne, Frankfurt, and Munich. 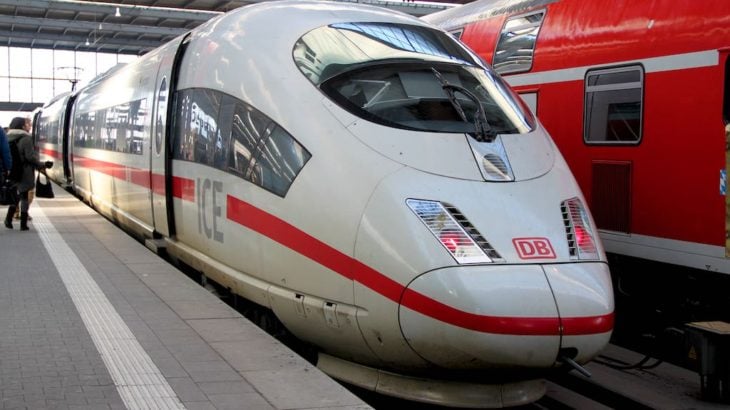 Travelers between Germany and Britain have increasingly competitive options. Although the recent ballooning of low-cost airline flights between Germany and the UK has come to a halt, trains compete well on certain routes, especially to Cologne but also Berlin and Munich. Travel by bus can be tiresomely slow but prices are often low especially over busy periods when plane tickets can be anything but cheap.

It is worth using a major internet reservation service to establish a base rate and to see what is available on the easiest and fastest routings. Lufthansa often have special fares that competes well with low-cost airlines on price while special offers on railways are often available to leisure travelers willing to comply with restrictions on train ticket reservations.

Cheap Flights on Low-Cost Airlines from the UK to Germany

In recent months, the number of low-cost airlines flying between the UK and Germany, as well as the number of destinations served, has taken a sharp nosedive. Just over a year ago, several budget airlines including Ryanair, easyJet, airberlin, and Germanwings often competed on similar routings between not only London and major German cities but also flying directly to Germany from smaller British airports including Manchester, Birmingham, and Glasgow.

Although the number of flights have fallen, it is still often possible to fly directly rather than having to go through the hubs of Lufthansa (Frankfurt and Munich) or that of British Airways at Heathrow.

Lufthansa often have internet only specials with European flights going at €99 all charges included. These Lufthansa flights compare well with low-cost airlines and the cheapest tickets still include the standard luggage allowances, often free drinks and food, and no charge for reserving a seat.

Flying is usually the fastest way to travel between Britain and Germany (although the trains compete strongly on the London to Cologne (Köln) route) and generally the further from London the journey starts, the more competitive flying becomes.

Be careful when flying to minor German airports – especially those favored by Ryanair. The recognizable name in the airport description may be some distance from the actual city, eg Frankfurt-Hahn is around 90 minutes by bus from Frankfurt am Main and Weeze is a long way from Düsseldorf.

Trains between Great Britain and Germany are usually slower than flying although London to Cologne on the Eurostar and ICE can be as fast as flying when calculating waiting and check-in times too. Train tickets are increasingly prices similarly to low-cost airline tickets – discounts are available on less popular trains but the cheap fare comes with restrictions.

Standard train fares can be expensive at first glance but just like full-fare tickets on planes allow for flexibility and refunds. When booking trains from London to Germany, it is often cheaper to reserve the Eurostar part of the journey from London to Brussels separately from the Deutsche Bahn section of the journey to qualify for the best discounts.

Deutsche Bahn often has special offers. It is fairly easy to get 25 or 50 per cent discounts using Sparpreise but note that these discounts are only available on the trains of German Railways. These discounts do not apply on the Eurostar trains or if a TGV Thalys train is used from Brussels rather than an ICE train.

Always read the fine print though – sometimes it is cheaper if Eurostar and Thalys trains are combined and booked together. Deutsche Bahn often have internet-only specials with return prices from Berlin or Munich to London as low as €160 when using day-time trains or as low as €125 when using Deutsche Bahn’s City Night Liner sleeper trains. London to Cologne tickets can be as cheap as €100.

RailEurope now gives online quotes for railway journeys from the UK to many parts of Europe. For standard fares and one-way journeys the prices are generally the same as for individual railway websites but special deals may be available on return journeys.

Cross-border journeys usually require a physical ticket that Rail Europe will only mail to addresses in the country where the office is located. Passengers therefore usually have to use the appointed agents such as Rail Europe (USA & Rest of the World)

and Voyages SNCF (UK). Deutsche Bahn has an excellent site with timetables for most public transportation services in Europe and also increasingly have special train ticket offers available to travelers from all countries in the world.

Note the check-in times for Eurostar trains – other high-speed trains may be boarded up to the minute of departure. Eurostar passengers are usually restricted to two suitcases but on other trains restrictions are in practice virtually non-existent. Eurostar and TGV trains require reservations while most German trains including almost all ICE trains do not require seat reservations.

Bus travel is somewhat slow but can be very cheap especially around popular traveling periods when air plane tickets are very expensive and even train tickets become hard to get. Buses from London to Germany take to Cologne (Köln) 13 hours, Frankfurt am Main 15 hours, Munich (München) 19 hours, and Berlin 18 hours.

Coach services between the United Kingdom (UK) and Germany are operated by National Express Eurolines. One-way fares are from London to Cologne €60/£48, Frankfurt €77/£62, Munich €88/£70, and Berlin €90/£72 but early reservations can lead to discount of over 50%. Return tickets save over 10% while students, children, and seniors also reserve discounts on many journeys. A special £15 connection fare allows cheap return travel on National Express coaches from anywhere in the UK to London if the trip is connected to a Eurolines trip to Europe.

See also National Express Eurolines Buses from the UK to Germany for updated information for the winter 2011 / 2012 season.

Flying is generally the fastest and often the cheapest way to travel between Britain and Germany. However, on especially the London to Cologne route trains can be both price and time competitive with flying. Trains to Munich and Berlin take longer but especially night trains allow for savings and a sane alternative to flying.