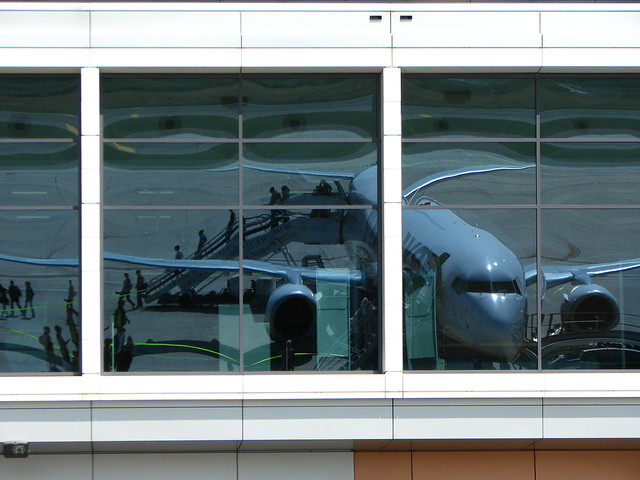 South Brussels Charleroi Airport (CRL) in Belgium is used by low-cost airlines and should not be confused with Brussels Airport (BRU). Although 50 km to the south of Brussels, public transportation is readily available to Charleroi Airport from downtown Brussels and most other destinations in Belgium. Airport shuttle buses are generally the easiest way to get to the airport from Brussels, Bruges, Ghent, Lille and Luxembourg while a train and bus combination is usually the better and cheapest option from other places in Belgium.

Airport shuttle minibus van transfers from South Brussels Charleroi Airport to any destination in Belgium are best booked in advance and compare offers. Such transfers may be worth the splurge for families and small groups but for most travelers using the bus and train will be much cheaper. Suntransfers gives online quotations for private airport transfers without first requiring personal details or flight numbers.

South Brussels Charleroi Airport (CRL) is in the town Charleroi around 50 km (30 miles) to the south of Brussels. Charleroi Airport is close to major highway junctions providing fast access to most part of Belgium, southern Netherlands, and northern France.

Taxis between downtown Brussels and South Brussels Charleroi Airport are pricy and around €80 for up to four passengers. The driving time is around 45 minutes.

Small groups may find better value in reserving a private airport shuttle in advance. An eight-seater minibus from the airport to Brussels is around €130 an €240 to Brussels. Shared shuttles are sometimes available and offer good value for money but departures are not very frequent.

Getting by Train to South Brussels Charleroi Airport (CRL)

South Brussels Charleroi Airport (CRL) is not directly linked to the railway network but Charleroi Sud station is reasonably close to the airport. The TEC bus line A runs up to twice per hour between the train station and the airport. Traveling time is twenty minutes. The bus is €6 but usually included in combination bus/train tickets.

Ticket machines at Charleroi Airport are outside the building near exit door 2 – cash or credit cards accepted. The train combination ticket is not available from the TEC bus driver – only the €6 bus ticket can be bought on the bus.

Although the train and bus combination is usually the cheapest way to travel between South Brussels Charleroi Airport and almost any destination in Belgium, shuttle buses are also available Brussels South, Bruges, Ghent, Lille, Luxembourg, Arlon, Thionville and Metz.

These airport shuttle buses to Charleroi Airport follow the typical pricing system of low-cost airlines – early reservations and low-demand periods are significantly cheaper than buying the ticket at the last moment or on the bus. Prices can be as low as €5 one-way on any route!

The shuttle buses to Brussels are usually painted white with light blue while the other buses usually have the light green Flibco color scheme. However, buses can be in any paint scheme, so ask if in doubt.

The Brussels City Shuttle buses run by Flibco often work out cheaper than the regular train and bus combination ticket when traveling from Charleroi Airport to Brussels South (Bruxelles-Midi) Train Station. Traveling time between Brussels Midi and Charleroi Airport is around an hour. No transfers are needed and there is no need to drag luggage up stairs or through busy stations. However, further transportation from Brussels South station is not included.

The one-way fare for the Brussels City Shuttle is €14 but can be as low as €5 for advance reservations. Tickets bought on the bus are €17.

The Brussels City Shuttle stops at Brussels South (Bruxelles Midi) train station at the intersection of rue de France and rue de l’Instruction. The buses are usually painted white with light blue. Anyone may use the bus – it is not linked to a specific airline.

At Charleroi Airport, the Brussels Airport Shuttle buses stop at stop 6 near exit 4.

It is necessary to depart from Brussels at least three hours before scheduled flight departure times – more time are advisable especially when traveling with luggage and not using online check-in services.

Travelers reserving tickets online at Brussels City Shuttle may also add priority airport security lane access to the bus trip for €4 per adult. The service is not currently available for other Flibco buses but may be introduced at some stage.

Flibco has around nine direct shuttle bus services per day between Charleroi Airport and Bruges (Brugge) with a stop in Ghent (Gent).

Traveling time from Charleroi Airport for these shuttle buses are around 2 hours to Bruges and 1h20 to Ghent (Gand).

The Flibco bus stops in the Kiss&Ride zones in front of the stations in Gent (St Pieters) and Brugge. At Charleroi Airport, the Flibco buses use the stop near Exits 1 and 2.

Advance reservations can see tickets as cheap as €5 but €17 is the full online fare to Bruges and €15 to Gent.

Flibco Bus to Luxembourg and Namur

Flibco operates shuttle buses up 8 buses per day from Charleroi Airport to Luxemburg via several cities in southern Belgium.

The one-way fare from Luxembourg to Charleroi can be as cheap as €5 for advance reservations at unpopular hours but generally are around €23 for reserved tickets for almost immediate travel, and €27 if bought from the driver.

For Metz, the fares range from €10 to €32 (€40 if bought from the driver). Flibco also offer connections from these cities and Trier to Frankfurt Hahn Airport (HHN) in Germany.

Flibco Bus from to Lille from Charleroi Airport

Flibco operates shuttle buses directly from Lille in Northern France to Charleroi Airport south of Brussels in Belgium. Up to twelve buses make the 90-minute airport run per day. As usual with Flibco, early bookings pay – fares range from €5 to €16 for online reservations, €20 if bought from the driver.

The Flibco bus stops in Lille at the Gare de Lille Europe, Boulevard de Turin and departs from Porte 1 at Charleroi Airport.

The Battle of Waterloo sights are located between the airport and Brussels making Waterloo a good first or last stop when flying via Charleroi. It is possible to visit these sites from Brussels of Charleroi Airport using public transportation, although a car certainly is more convenient.

« Top Sights to See in Nuremberg in Franken, Bavaria
Getting to Geneva Airport by Bus or Train »
Home » Belgium » Public Transportation to South Brussels Charleroi Airport CRL in Belgium