Getting to Waterloo and battlefield sights in Belgium is easy by car, train and bus (W or 365) for day trips from Brussels and Charleroi. 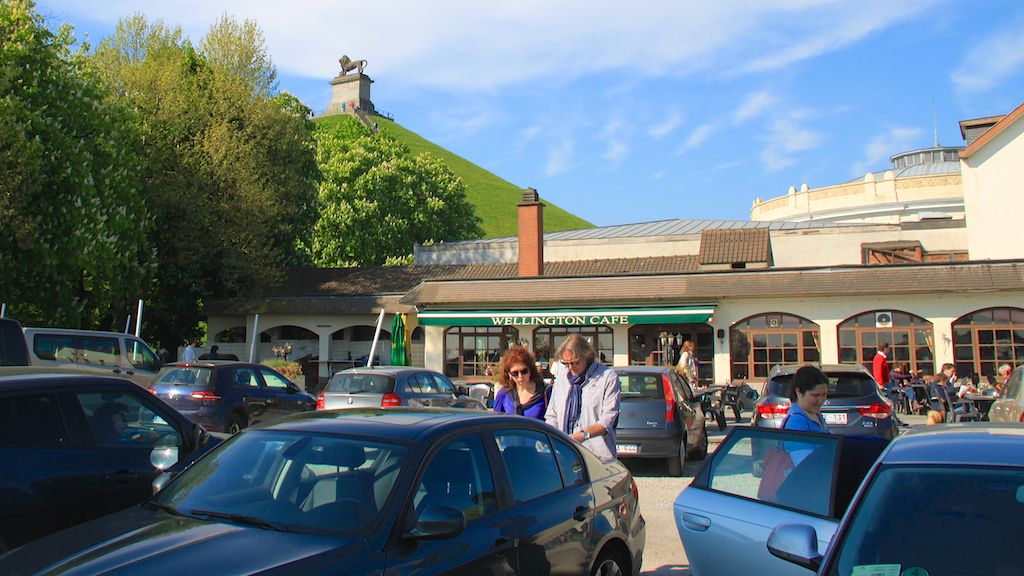 The battlefield of Waterloo is a popular day-trip destination from Brussels and Charleroi. Transportation options include driving (plenty of parking), the train or the bus. Bus W and 365 offer direct connections from Brussels South (Bruxelles Midi) to Waterloo and is the cheapest and simplest public transportation option. The main sights of the Battle of Waterloo can be divided into three sites: Waterloo town center (Wellington Museum), 4 km to its south is the Lion’s Hamlet (the battlefield) and a further 4 km south is the Museum Napoleon.

Suntransfers gives online quotations for private transfers without first requiring personal details. A car with driver may also be hired by the hour but costs run up while sightseeing.

By Car to Waterloo

Waterloo is around 20 km to the south of Brussels and 40 km to the north of Charleroi and Brussels-South (Charleroi) Airport.

The Battle of Waterloo sights are easiest explored by car. The order in which sites are visited is not that important although it would be a good idea to visit the Lion’s Mound early morning or late afternoon to avoid the busier middle-of-the day period when bus parties are more common.

Signposting to the battlefield (Champ de Bataille) is generally good. Parking is available at or near the main sights and currently free. In Waterloo town, use the parking lots or the blue zone parking off the main road.

When driving from Brussels or Mons, use the highway O Ring. For Waterloo town center, use exit 28 or 27 and for the Hameau du Lion and Napoleon’s HQ, use exit 25.

Route N5 connects the three sites. From parts of Brussels and Charleroi, the N5 may be faster than going to the highway. Similarly, between sites it is simpler to use the N5 and avoid returning to the motorway.

Buses are generally the simplest and cheapest way to visit the Battle of Waterloo 1815 sites when traveling from Brussels.

From Brussels-South train station (Bruxelles-Midi) two bus lines travel to Waterloo: Bus W (twice per hour) and bus 365a (once per hour or once every two hours). Either bus may be used to Waterloo town and the Lion’s Hamlet but only bus 365 travels to the Napoleon Museum.

Buses W and 365 departs from avenue Fonsny at Brussels South (Bruxelles Midi) station and reach the stop Waterloo Eglise in around 40 minutes. This stop is directly in front of the St Joseph Church, the Waterloo Tourist Information Office and the Wellington Museum.

Both buses W and 365 departs from the Waterloo Eglise stop towards the Lion’s Mound but use different routes and stops. The closest bus stops to the Hamlet of the Lion are Route de Nivelles (at the Esso petrol station) on bus W and stop Monument Gordon when using bus 365. Traveling time from Waterloo to either stop is around 10 minutes followed by a very short walk.

Only bus 365 continues to the Museum in Napoleon’s Last Headquarters. Stop Genappe-Musée du Caillou (not Chalet de Napoleon) is just past the small museum, or Plancenot-Maison du Roi just before. Note the bus times, as it is a 5-km hike back to the Lion’s Mound, if no bus is coming for the following couple of hours.

A day ticket (carte 1 jour) for around €8 covering all bus transportation for the day may be bought directly from the bus driver. Using just the bus is the cheapest way to explore the Battlefield of Waterloo sights from Brussels. Using the bus between two sites are around €2 for the Next ticket or €4 for the one-day Next card.

By Train to Battlefield of Waterloo Sites

Trains offer an alternative to buses when traveling to the Battle of Waterloo sights. In some cases, especially when not traveling from Bruxelles-Midi, the train may be faster than the buses but extra walking and waiting times may make the timesaving negligible.

Two train stations are useful for travelers to the Battle of Waterloo sites:

Braine-l’Alleud station has the higher frequency of trains – usually at least three per hour to Brussels-Midi (and beyond) and two to Charleroi Sud. Direct intercity trains to Brussels South takes 14 minutes, the Interregio (IR) trains take a more leisurely 25 minutes.

Waterloo station has one train per hour to Brussels-South on the Interregio line Brussels-Nivelles. Traveling time is around 22 minutes from Brussels South.

Tickets from Brussels to Waterloo is €3.60 and to Braine-l’Alleud is €4.10. Returns on weekends can give discounts; otherwise buy two singles.

Trains from Braine-l’Alleud take around half an hour to Charleroi Sud station. The bus to Brussels-South Charleroi Airport (CRL) departs from this station. Use the official name Charleroi-South Airport to find the correct timetables and fares.

It is also possible to continue of bus 365 to Jumet Madeleine in the north of Charleroi. Change here to the metro tram for travel to Charleroi Sud. Bus options are also available to near the airport but it is complex at times – do not use this option to the airport without double-checking departure times at the TEC website.

Visiting the Battle of Waterloo Site by Public Transportation

The cheapest way to visit the Battle of Waterloo sites is by bus. A day ticket from Brussels cost around €8 and covers the trip to and from Brussels, as well as bus travel between the sites at Waterloo. The bus further has the advantage of stopping directly in front of the sites.

Using the train is also sensible, especially if traveling from other points than Brussels South. The trains to Braine-l’Alleud stop at all three Brussels stations and sometimes arrive from much further afield, e.g. Brussels National Airport (BRU), Antwerpen, Mechelen, or even Essen in Germany. To the south of Waterloo, the trains terminate at Nivelles or Charleroi. It may be sensible to start the day-trip from Waterloo station with the fewer departures and end at Braine-l’Alleud, from where trains are more frequent.