The Lion’s Mound and panoramic painting of the Battle of Waterloo (1815) are the main sights to see on a day-trip to the battlefield (Champ de Bataille) from Brussels. 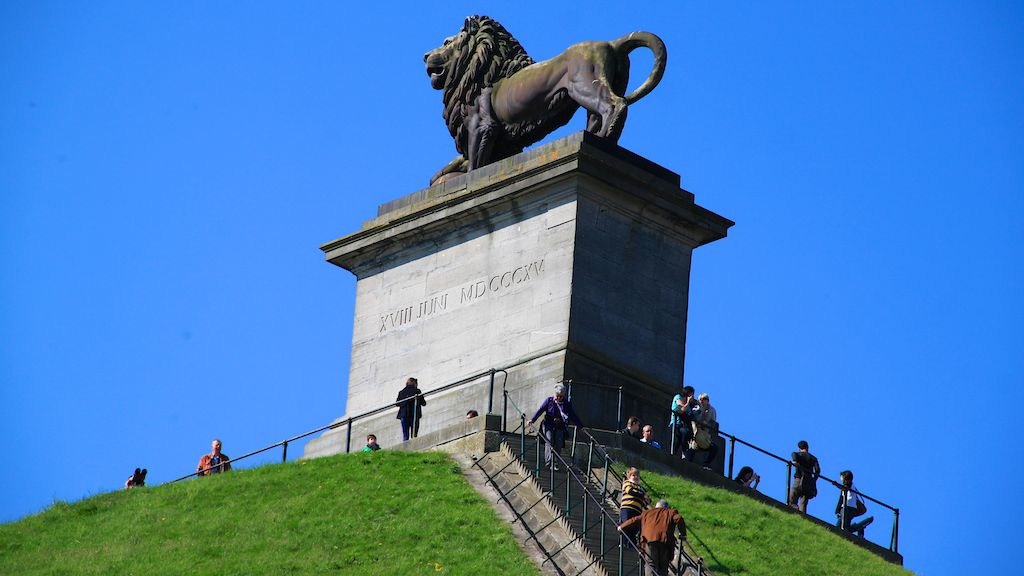 The main sights to see at the site of the Battle of Waterloo (June 18, 1815) near Brussels in Belgium are the Lion’s Mound, a huge panoramic painting, and a visitors’ center with extracts from movies. Further smaller monuments and memorials are scattered throughout the battlefield, which has mostly returned back to ordinary farmland. The farmhouses (fermes) famous from the battle including Mont-St-Jean, Papelotte, Belle-Alliance, Haie Sainte and Hougoumont are still in existence. The Battlefield of Waterloo and the panoramic painting has been added to the tentative list of UNESCO World Cultural Heritage sites.

Tourism at the battlefield started on June 19, 1815, when the upper classes arrived by coach from Brussels to take a look. It has continued ever since and will probably be at a high point during the bicentenary in 2015. 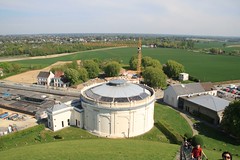 However, there is surprisingly little to see at the battlefield itself. The easiest recognizable sight is the Lion’s Mound, after which the Lion’s Hamlet (Hameau du Lion) is named. Adjacent to it are a round building with a large panorama painting of the battle and a visitors’ center with two movies on the battle.

The rest of the battlefield has mostly returned to normal farming. Smaller memorials and monuments are scattered throughout the area. Maps can be bought or guided tours booked at the visitors’ center.

The formal sites at the Lion’s Hamlet, for which admission is charged, are the Lion’s Mound, two movies and the panoramic painting. (The rather embarrassingly bad wax museum has closed.)

A new visitors center is being built underground and should open by early 2015. It should hopefully present a better overview of the battle and offer better value for money than the current half-hearted attempt. 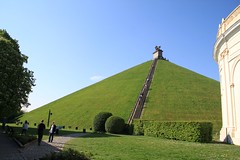 The Lion’s Mound (Butte du Lion / Leeuw van Waterloo) is a 40-m tall tumult topped by a huge cast iron lion measuring around 4.5 m in both length and height. It was completed in 1826 and was constructed at the spot where Willem, Prince of Orange (and from 1840 King Willem II of The Netherlands), was injured when a musket bullet to his shoulder knocked him off his horse during the Battle of Waterloo.

Willem previously fought with the British in various conflicts and was the commander of the I Allied Corps at both the Battle of Quatre Bras (16 June 1815) and more famously Waterloo (18 June 1815). In parts of The Netherlands, which at the time included present-day Belgium, he was hailed as the hero of Waterloo. As heir to the throne this image was encourage and in part inspired the erection of the large memorial. 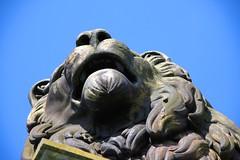 The lion is the heraldic animal of the Dutch royal family and stands here with one paw on a globe. The symbolism is that the battle brought peace to the world. In Europe, the peace after Waterloo lasted until the Crimea War (1853-6) and French and German states only fought again in the Franco-Prussian war in 1870. Both wars were significant but small in comparison to what went before and what was to follow in the 20thcentury. In west German states, such as the Rhinelands and Baden, where French troops entered every few decades for centuries, no fighting would be seen until 1944.

Climbing the Lion’s Mound at Waterloo 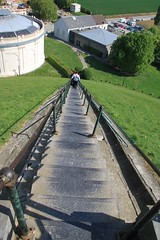 It is a steep 226 steps to the top of the tumult with fantastic views of the former battlefield. For visitors without much knowledge of the battle plan, it is mostly an expensive view of otherwise fairly ordinary farmland. A simple plaque shows the basic battle plan but bringing a better map would be prudent to get the most out of the perfect view. 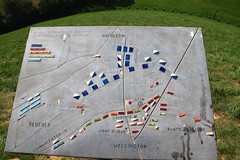 Apart from the O Ring motorway, which skirts the side of the battlefield, and the N5 national road from Brussels to Charleroi that runs straight across it, the farmland that was used for the battle in 1815 is still pretty much as it was two centuries ago. The construction of new buildings on the battlefield has been prohibited for almost a century. 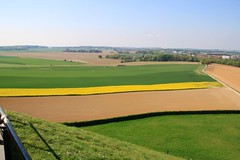 Around 130 smaller monuments, memorials and statues are scattered over the battlefield. The farmhouses (fermes) famous from the battle including Mont-St-Jean, Papelotte, Belle-Alliance, Haie Sainte and Hougoumont are still in existence. Most of these sites may be visited for free – buy maps from the tourist information office in Waterloo or from the visitors’ center at the Lion’s Mound.

A bicycle is an ideal way to explore the area, as distances can be long for hiking and many paths not open to cars. Unfortunately, no bike rental shops are available in the region.

Many sites and memorials should be improved for the bicentenary. The Ferme Hougoumont – where the garden and orchard changed hands seven times during the battle – is being restored for 2015.

The movies shown in theaters at the visitors’ center next to the Lion’s Mound are a good in introduction to the Battle of Waterloo and a great place to start the visit if unfamiliar with the details of the famous battle.

The first movie is a documentary on developments in Europe that led to the battle and the actual battle itself. The second is extracts from the epic Waterloo (1970) by Sergei Bondarchuk.

Each movie is just over 20 minutes long but as visitors move on to a different theater for the second movie, new screenings start every 20 minutes. Audio is in French with English and Dutch subtitles. German visitors, despite the role Prussia played in the allied victory, may feel done in. 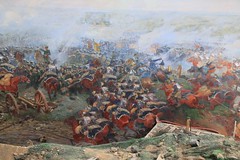 A large panoramic painting in a purpose-built rotunda next to the tumult was unveiled in 1912 in time for the centenary of the Battle of Waterloo. This 110 by 12 m circular painting by Louis Dumoulin depicts the charge by Marshal Ney, Napoleon on his white horse surrounded by his staff, and the resistance of the English infantry squares around the Duke of Wellington.

Most of the rotunda building, with a diameter of 35 m, is taken up by the large painting but at the lower level is a scale model of the Ferme Hougoumont and further graphics explaining the battle.

These kind of panoramic paintings were hugely popular in Europe, especially during the late-19th century. Visitors admire the paintings from a raised platform – 5 m high here – in the center of the circular display to feel part of the action.

Around 30 of these paintings survived in Europe – amongst others on display include the Panorama Mesdag in The Hague and Thun Wocher Panorama in Switzerland. Modern attractions also favors this format using video screens around the audience for a 360° experience, e.g. Arromanches 360° on the D-Day Invasion in Normandy.

Three kinds of tickets are available to see the attractions at the Hameau du Lion:

The Pass 1815 gives a discount of €6 on individual entries but many may find the Pass Hameau du Lion costing a bit much for seeing fairly little.

Tickets are sold at the visitors center, online, or the Pass 1815 from any of the three attractions and the tourist information office in Waterloo.

The attractions at the Hameau du Lion are open daily from 9:30 to 18:30 from April to September and 10:00 to 17:00 from October to March. The attractions are open 365 days a year. The other memorials are unfenced and like the battlefield itself always open.

Guided tours of the battlefield and the smaller memorials can be booked onsite or in advance.

Food and drink are available from the Café Wellington adjacent to the visitors’ center. However, as at most major tourist attractions, better food and lower prices are easier found elsewhere. Waterloo town has many options and further restaurants are open at lunchtime in smaller villages in the region.

Transportation to the Battlefield of Waterloo

Getting to the Hameau du Lion at the site of the Battlefield of Waterloo is easy by car or public transportation. By car, use exit 25 “Butte du Lion” on the Ring O motorway between Brussels and Mons / Charleroi. Free parking is available near the mound.

From Brussels and Waterloo, use bus W (stop Route de Nivelles) or bus 365 (stop Monument Gordon). Braine-l’Alleud is the closest train station – it is a 3 km walk or short bus ride (W) to the Hameau du Lion.

See Transportation to the Battle of Waterloo Sites for more complete details.