See Pretty Half-Timbered and Baroque Towns in the Tauber Valley

Tauberbischofsheim and Lauda-Königshofen are two small but pretty towns in the Tauber Valley in Germany with half-timbered houses as well as some Baroque façades. 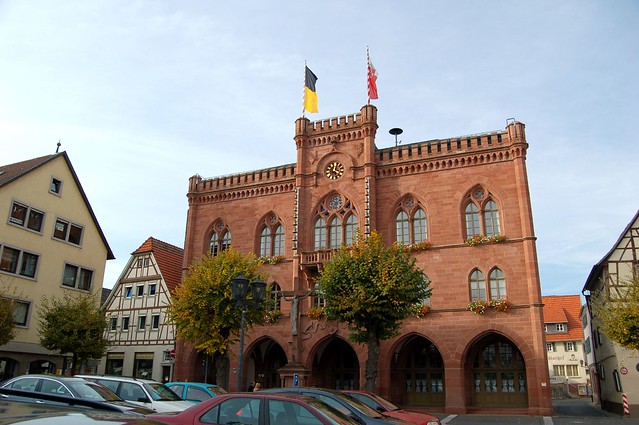 Around 735, St Boniface founded a nunnery in Tauberbischofsheim that became important enough to warrant imperial visits in the early years of the Holy Roman Empire. Early in the 13th century, Tauberbischofsheim became part of the Archbishopric of Mainz. Following secularization, it briefly fell to the House of Leiningen before becoming part of the Archduchy of Baden and eventually the federal state of Baden-Württemberg.

Tauberbischofsheim, surrounded by vineyards, is set in the heart of the Tauber Valley. It has a lovely old town and Marktplatz (Market Square) with half-timbered buildings mostly from the 18th century. However, the Rathaus (Town Hall) is neo-Gothic from the late 19th century.

A short walk down Hauptstraße is the Kurmainzisches Schloss, former residence of the representative of the archbishop of Mainz. The palace with tower dates partly from the late 13th century.

The Kurmainzisches Schloss now houses the Tauberfränkische Landschaftsmuseum (Franconian Tauber Regional Museum), Schlossplatz, tel 09341-3760, with art and furniture, mostly from the Renaissance, Baroque, and Biedermeier periods, as well as agricultural and handcraft instruments from yesteryear. Opening hours are Easter to October from Tuesday to Saturday from 2:30 to 4:30 pm, Sunday from 10 am to noon and 2 to 4:30 pm. Admission is €2.50.

Lauda-Königshofen in the Tauber Valley, Germany

Lauda is a pretty, small town of around 6,000. It was once rich, as the few remaining Baroque buildings testify, but it fell on harder times during the 18th century. Much of the old defenses were destroyed to recycle the building material.

Lauda’s old town is cut off from the Tauber by the railway line – it was once a major railway junction. Although pretty, the town finds it hard to compete with the other tourism powerhouses in the region.

The main sight is the town panorama with lovely half-timbered buildings as well as fine samples from the Baroque. The most impressive buildings are in Rathausstraße starting with the late 15th-century Oberes Tor (Upper Gate), one of the few samples of the former town defenses. At the corners with Marien and Pfandstraße are two former town halls.

In the early 17th century, Würzburg Bishop Julius Echter had two churches erected in Lauda. The Stadtkirche St Jakobus der Ältere (Town Church St James the Elder), Pfarrgasse, is close to the Pulvertor, another rare remnant of the 15th-century town defenses. The Liebfraukirche (Church of Our Dear Lady) to the west of the old town has a rich interior and Baroque Stations of the Cross.

Next: Bad Mergentheim with a lovely old town, relaxing spa facilities, the Stuppacher Madonna of Matthias Grünewald, and above all the Deutschordenschloss (Teutonic Order Castle).

Further Destinations & Information on the Tauber Valley in Germany