The Romantic Road in the Lovely Sweet Tauber Valley Region 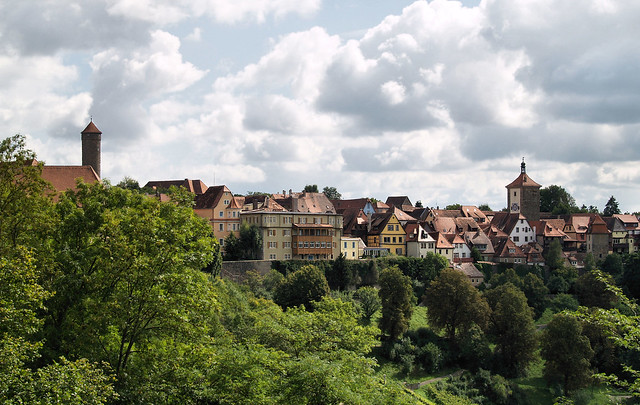 Liebliches Taubertal (Sweet Tauber Valley) is mostly the area between Wertheim on the Main and Rothenburg ob der Tauber. This area includes the first 100 km/60 miles of Germany’s famous Romantic Road, which starts in Würzburg and joins the Tauber River at Tauberbischofsheim.

Most of this region is in the German federal state Baden-Württemberg and not in Bavaria because of political boundaries drawn at the Congress of Vienna (1814). However, the Tauber Valley’s history and culture are closely associated with Bavarian Franken.

Most towns in the Tauber Valley area are small with the romantic townscape often the main attraction. Famous sights include the Deutschordenschloss and Mattias Grünewald’s Suppacher Madonna in Bad Mergentheim, the Renaissance Hohenlohenschloss in Weikersheim, and the Tilman Riemenschneider altar in the Herrgottkirche in Creglingen.

The Taubertal Card is available from all tourist offices in the region. It gives small discounts on a wide range of services ranging from food to museum admissions and cultural events. The price ranges from €3 for a day to €8 for a week and €45 for a year. Family cards are only marginally more expensive.

Transportation in the Tauber Valley

A car makes stopping over in small, single-sight towns much easier but public transportation in most of the Tauber Valley is well developed. The railway line along the Tauber runs from Wertheim to Weikersheim with at least two-hourly trains and good cross connections to Würzburg. Frequent buses are available between Weikersheim and Creglingen.

Public transportation from Creglingen to Rothenburg ob der Tauber is problematic. The local bus is infrequent, often forcing travelers to take a long detour via Würzburg or Shrozberg.

The Europabus EB190 frequently changes its schedule and sometimes covers this section of the Romantic Road.

Further Destinations & Information on the Tauber Valley in Germany