Füssen in Bavaria is a good transit town when visiting Schwangau (Schloss Neuschwanstein & Hohenschwangau Castles) or nearby Linderhof, the Wieskirche, Ettal, and Oberammergau.

Füssen and Schwangau in the beautiful Bavarian Allgäu region are amongst the most popular holiday destinations in Germany. Vacationers enjoy the numerous outdoor activities but the huge number of day-trippers from Munich (München) comes mostly to see the Disney-like Schloss Neuschwanstein and nearby Hohenschwangau castles. Most travelers transit via Füssen, which is the final stop of the Romantic Road.

Top Sights to See in Schwangau, Southern Bavaria in Germany

Disney-like Schloss Neuschwanstein Castle, with around 1.2 million annual visitors, is undoubtedly the most popular sight in the Schwangau region. This white castle, with its medieval, neo-Romanesque look, was built in the late nineteenth century by Bavarian “Mad” King Ludwig II. Reservations to see the interior is highly advisable.

Nearby Schloss Hohenschwangau is an early nineteenth-century, neo-Gothic castle. King Ludwig spent much of his childhood here and the romantic setting inspired his own building spree. Hohenschwangau Castle is less popular than Schloss Neuschwanstein and can often be seen without prior reservations.

Great short hikes near Schwangau include the wild-romantic Pöllatschlucht (Pöllat Gorge) near Schloss Neuschwanstein and a walk to the Marienbrücke (Mary Bridge) for the indisputably best views of the castle. Many further and longer walks are available in the mountains above Schwangau.

Top Sights in Füssen – the Final Stop on the Romantic Road, Germany

Most travelers using public transportation to Schloss Neuschwanstein change from the train to the local bus in Füssen. Few venture into this small old town, which has a number of interesting buildings that are actually really old rather than nineteenth-century fantasies. Füssen is the official last stop on the popular Romantic Road (Romantische Straße) vacation route that connects many romantic sights in Bavaria.

In addition to the fantasy castles in Schwangau and old town of Füssen, several further sights are within easy driving distance from Füssen. Most sights can be reached by public transportation but double-check return times as some buses offer limited services on weekend and during school holidays.

The Füssen-Schwangau area is mostly visited by day-trippers from Munich going to visit Schloss Neuschwanstein. Transportation is easy by rail and bus from Munich although a car does make it easy to see many more sights in a shorter period. 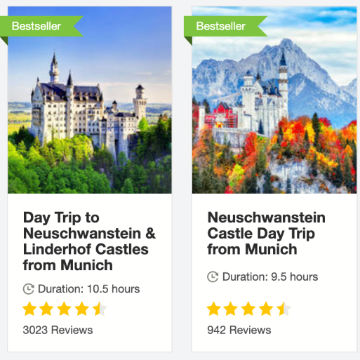