The top sights to see in Oberammergau, Bavaria include Lüftlmalerei painted houses, woodcarvings in the Pilatushaus, the Passionstheater used for the Passion Play, and nature. 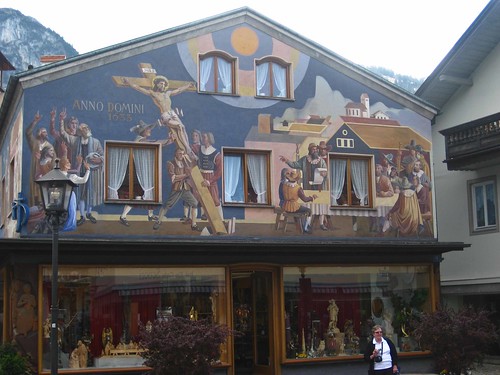 Oberammergau in Bavaria, Southern Germany, is world famous for its Passion Play (Passionsspiele), which is performed at least every decade. Oberammergau has a beautiful location near the Bavarian and Tyrolean Alps and is popular with outdoor enthusiast. Oberammergau itself is pretty too with many Lüftmalerei (tromp l’oeil) painted house facades. Oberammergau is also famous for its excellent woodcarvings – mostly but not exclusively of religious themes.

Oberammergau is popular with tourist for its convenient location close to the mountains as well as numerous interesting sightseeing spots. Houses and hotels in Oberammergau generally sport typical Bavarian architecture or at least style elements including the use of wood and in summer balconies and window flower boxes overflowing with especially geraniums.

Many building in Oberammergau have lovely tromp l’oeil (Lüftlmalerei) painted façades. In Oberammergau, tromp l’oeil paintings are mostly of religious themes but a few rowdy beer hall and fairy tale scenes can also be seen.

The Pilatushaus with its tromp l’oeil painted façade displays amongst the best woodcarving items made in Oberammergau. The free Pilatushaus is usually open Tuesday to Saturday afternoons from mid-May to mid-October and in winter around major holidays.

Many studios are also open to visitors – enquire at hotels or the tourist information office about participating woodcarvers.

The Oberammergau Museum is a typical tourist town museum with the usually eclectic collection of local art and historical objects. Once again, religious objects take pride of place.

The Oberammergau Museum has a large collection of wood-carved items from the Gothic period to the present. Cribs (Christmas nativity scenes) and locally produced glass also feature prominently.

The Oberammergau Museum is usually open Tuesday to Sunday from 10 am to 5 pm but closed for most of November, February, and March. Admission is €4.

The Passionstheater in Oberammergau, Bavaria

The Passionstheater in Oberammergau was built for performance of the Oberammergauer Passionsspiele (Passion Play). The theater can only be used in summer as it is partly open air. All 4,500 seats are covered by a roof and performances are therefore never cancelled due to rain.

A wide range of hotels are available in the Oberammergau region. These hotels are generally reasonably priced except during the Passion Play season when prices skyrocket. Oberammergau can easily be reached on public transportation although a car is an easier and very pleasurable way to explore this part of Bavaria. Famous sight in the immediate region include Zugspitze, Kloster Ettal, Schloss Linderhof, the Wieskirche, as well as the Disney-like Schloss Neuschwanstein.