Aachen Cathedral is one of the shiniest cathedrals in Germany. The interior shows an unusual amount of gold while the Byzantine-style mosaics add color and bling to what is in part a fairly dark building. The core of the cathedral is an octagon built by Charlemagne around AD 800. The lower level is fairly dark with low vaults, as it is the upper floor with tall arcs and high vaulting that was used by the emperor and high nobility. The choir and chapels are mostly Gothic additions. Many reliquaries and historic artworks are now in the treasury but the shrine of Charlemagne, the Mary reliquary, and other medieval works in the choir still impress. 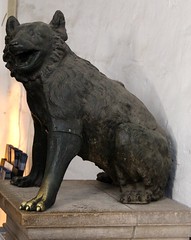 The main entrance to the Aachener Dom is through the west portal. The bear statue is from the Ottonian-Renaissance (10th century) while the large bronze pinecone with 129 scales is dated to anywhere between the 3rd and 10th century. It may have been a fountain spout in Charlemagne’s palace before it was moved to the church.

The use of the other rooms in the westwork is not clear anymore but may have been linked to baptism and other ceremonies. Charlemagne originally was probably buried in one of these rooms in a sarcophagus from antiquity now preserved in the treasury. 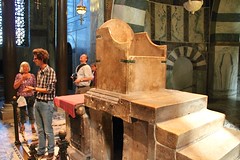 The interior of Aachen Cathedral is on two levels – the upper church (Hochmünster) was linked by a passage to Charlemagne’s palace complex (it was on the location of the present Rathaus). This second level with the throne of Charlemagne (and the choir) may only be seen on a guided tour. Most of the lower floor is freely accessible to all visitors.

The core of the Aachener Dom is still the original Carolingian octagonal chapel. At its center, the octagon soars to a 31.5-m high dome. This was for almost two centuries the highest dome in Europe north of the Alps. The 19th-century dome mosaic and painting depict the same scene as the Carolingian original but is not a direct copy. 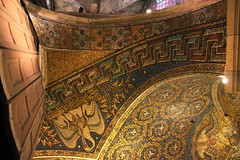 At the lower level, the octagonal center is surrounded by arcades and a number of small chapels. The mosaics in the vaults here are from the late-19th and early 20th century and inspired by Byzantine mosaics as seen in Ravenna and of course in modern-day Istanbul — the Prussian elite had a fascination with Byzantine art. (The Prussians constructed the Erlöserkirche, a magnificent Neo-Romanesque church with Neo-Byzantine mosaics around 1900 in Bad Homburg near Frankfurt. See also the Schaumburg-Lippe family mausoleum in Bückeburg.)

The second level of the octagon has eight arches with ancient pillars brought from St Gereon in Cologne (and possibly other ancient sites too). These are purely of decorative value and not part of the structure, as was shown when Napoleon had these pillars taken out and transported to Paris. Eventually, most were returned to Aachen but a few are still in the Louvre and replaced by modern copies. The bronze railings are the original Carolingian work.

The second level of the chapel was connected by bridge to Charlemagne’s palace. This high or upper church (Hochmünster) would have been the floor used by the emperor and the high nobility. The vaulted ceilings here are clearly higher than that of the lower floor that was open to lesser mortals too. (A similar setup can be seen in other Imperial chapels such as the much later Kaisersburg in Nuremberg).

The original imperial throne is on this floor, which can only be seen on a guided tour. See The Throne of Charlemagne in Aachen for more details. 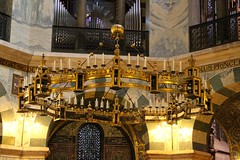 The huge ring chandelier hanging in the center of the octagon was donated by Staufer Emperor Friedrich I Barbarossa (Frederick I Red Beard). It dates from 1170 and is just over 4 m in diameter and hangs on 27-m long Carolingian chains around 4 m above the floor.

The chandelier symbolizes the Heavenly Jerusalem with the ring the city walls with eight city gates and eight towers (four too many but aesthetics demanded by the octagonal shape of the chapel overruled scripture!). 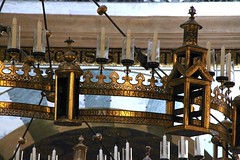 Although some silver decorations were lost through the centuries, the gilded copper Barbarossaleuchter is in a remarkably good condition and 48 candles are still lit during major religious ceremonies.

Only four of these Romanesque ring chandeliers survived in Germany – at least 37 are known to have existed. One is in Comburg (near Stuttgart) and the other two are in Hildesheim, a city with remarkable UNESCO World Cultural Heritage-listed Romanesque churches.

The Gothic choir area of the Aachener Dom is only accessible to visitors on a guided tour but most elements can be seen reasonably well from the church itself.

The choir is a Gothic masterpiece. Its glass surface of around 1,000 m2 gives an impressive high glass-to-stone ratio and the nickname of the Aachen Glass House. The glass is modern, as the original was blown out during the Second World War.

The main sights in the choir are the two huge early 13th-century gilded shrines – one contains the remains of Charlemagne (Karlschrein) and the second Mary Shrine (Marienschrein) several relics shown every seven years (2014, 2021, etc).

More impressive gold work can be seen on the Heinrichskanzel (ambon) and the Pala d’Oro. The pulpit was donated by Henry II (Heinrich II), the last Ottonian emperor, in the early 11th century. The Pala d’Oro is from a similar period and was probably part of a larger altar. Both are highlights of the Ottonian Renaissance.

See Visiting the Choir of Aachen Cathedral for more details.

Next → The Throne of Charlemagne in Aachen Cathedral