The imperial throne and tomb of Charlemagne in a gilded shrine are top attractions to see in the Carolingian Aachener Dom in Germany. 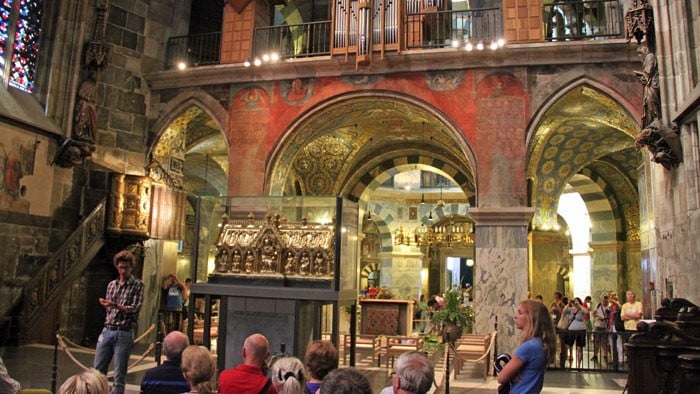 Aachen Cathedral (Aachener Dom) is one of the most famous and most interesting historic buildings in Germany. It was originally the palatine chapel of Charlemagne and for almost six centuries the church where German kings were crowned. Much of the present church is of course newer, but the octagonal core is Carolingian and the Imperial marble throne (Karlsthron) is the original. Aachen cathedral was the first German site and one of the original twelve sites placed on the first UNESCO World Cultural Heritage list in 1978. 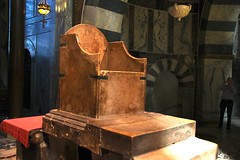 Aachen Cathedral is one of the oldest buildings still in use in Germany. The central core was constructed around AD 800 as the palatine chapel for Charlemagne in Aachen (or Aix-la-Chapelle in French and sometime English).

Charlemagne was of course not crowned here himself, but the church’s personal ties to the great European leader was the motivation for making it the coronation church for German kings for near six centuries. The marble throne of Charlemagne used during these ceremonies is virtually intact and one of the top sights to see in this historic church.

The octagonal core and much of the western rooms of Aachen Cathedral are the originals built in the time of Charlemagne. Other parts are clearly Gothic additions – the magnificent choir with its high glass-to-stone ratio is a masterpiece of the genre. The central citrus press roof is clearly Baroque but most other baroque detailing has been removed to bring the church more in keeping with is Carolingian origins.

The interior with late-19th-century mosaics are in keeping with early Christian churches but most of the decorations are new. The pillars and brass railings on the second level are mostly original, as is of course Charlemagne’s marble throne, which can only be seen on a guided tour of the Cathedral.

In the choir are two early 13th-century gilded shrines. The larger reliquary contains the remains of Charlemagne while the second has important relics from the life of Christ.

Aachen Cathedral is a working Roman Catholic church and thus have long opening hours but with visiting restricted during religious services.

Aachen Cathedral is open daily from 7 am to 7 pm (closing at 6 pm from January to March). As sightseeing is no allowed during services, this in effect means that the church is open for tourists only after 11 am on weekdays and after 12:30 on weekends (although it is possible to visit in between services).

Admission to the ground floor of the church is free. The choir area may only be entered by visitors on a guided tour but the art here can be seen reasonably well from behind the barriers too. In contrast, the throne of Charlemagne, on the second level of the church, can only be seen on the guided tour.

The guided tour of Charlemagne’s throne and the choir is €4 and last around 45 minutes. The guided tours of Aachen Cathedral are at 2 pm in English, more frequent in German and frequently not on public holidays.

Next → The Building of Aachen Cathedral