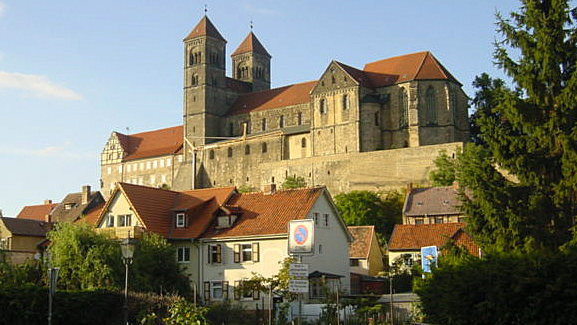 Aachen Cathedral (Dom) – the core is Carolingian from around 800.

Würzburg Residence (Residenz) – this sumptuous palace is a synthesis of the European Baroque.

Pilgrimage Church of Wies (Wieskirche) – the definitive work of the Bavarian-Rococo designed by Dominikus Zimmermann.

Palaces and Parks in Potsdam and Berlin – the preferred residences of the Prussian Electors and Kings; including Frederick the Great’s Sanssouci.

Abbey of Lorsch – the only Carolingian building to have survived in its original form.

Mines of Rammelsberg and Historic Town of Goslar – an important residence of early German kings and the mines a source of wealth for centuries.

Town of Bamberg – the old town, with over 1000 listed buildings, kept much of its early medieval layout.

Collegiate Church, Castle, and Old Town of Quedlinburg – a remarkable ensemble of 1,300 half-timbered buildings and an important church from early German history.

Messel Pit Fossil Site – life as it was known 49 million years ago; finds include 30 complete skeletons of pre-horses.

Cologne Cathedral (Kölner Dom) – the largest Gothic church façade in the world, constructed between 1248 and 1880.

Bauhaus Sites in Weimar, Dessau, and Bernau – the origins of this influential design school.

Luther Memorials in Eisleben and Wittenberg – sights associated with the church reformer.

Classical Weimar – a small town but a giant in German literature and preferred home of Schiller and Goethe.

Wartburg Castle in Eisenach – the most German of castles.

Museum Island (Museuminsel) in Berlin – an island in the heart of Berlin with numerous mostly nineteenth-century museum buildings.

Zollverein Coal Mine Industrial Complex (Industriekomplex Zeche) in Essen – a major industrial complex with Bauhaus-inspired architecture from the 1930s.

(The Dresden Elbe Valley was deleted from the list in 2009 due to a road bridge being built across the Elbe River.)

Town Hall (Rathaus) and Roland of Bremen – the market square of an important Hanseatic League city.

Muskauer Park / Park Muzakowski – a nineteenth-century park split by the Neisse River, or German-Polish border since the end of World War II.

Upper German-Rhaetian Limes – the frontier between civilized Rome and barbaric Germania ran 550 km from the Rhine to the Danube – Europe’s longest monument.

The Waddensee (shared with the Netherlands) –  a flat coastal wetland with an important and largely undisturbed intertidal ecosystem.

Fagus Factory in Alfeld an der Leine – a 10-building factory complex designed by Walter Gropius in 1910 as a prelude to the Bauhaus.

Prehistoric Pile dwellings around the Alps – 111 Neolithic and Bronze Age dwelling in the Alpine region. (Shared with Switzerland and other Alpine nations.)

The 18th-century Margravial Opera House in Bayreuth, as the only surviving original Baroque court theater.

The Bergpark Wilhelmshöhe in Kassel is a remarkable Baroque and Romantic parc with monumental water displays.

The Carolingian Westwork and Civitas Corvey in the Weser Valley near Höxter – an important Carolingian architectural expression showing the importance of imperial monasteries in securing territorial and administrative control in the Frankish empire.

Speicerstadt and Kontorhaus district with Chilehaus in Hamburg as an example of a warehouse-office district associated with a port city.

Homes in the Weissenhof Siedlung in Stuttgart as one of 17 sites in various countries (mostly France) of an outstanding contribution to the modern movement by architect Le Corbusier.

Caves and Ice Age Art in the Swabian Jura including some of the oldest figurative artworks by humans.

Primeval Beech Forests of the Carpathians and other regions of Europe – include four forest areas in Germany.

Naumburg Cathedral – the transition from late Romanesque to early Gothic with masterful medieval life-size sculptures of the church founders.