Lübeck is famous for its UNESCO-listed old town with brick-Gothic architecture including the Marienkirche, Rathaus (Town Hall), and Holstentor. The Buddenbrook House, Hanse Museum, and Niederegger marzipan are also popular. 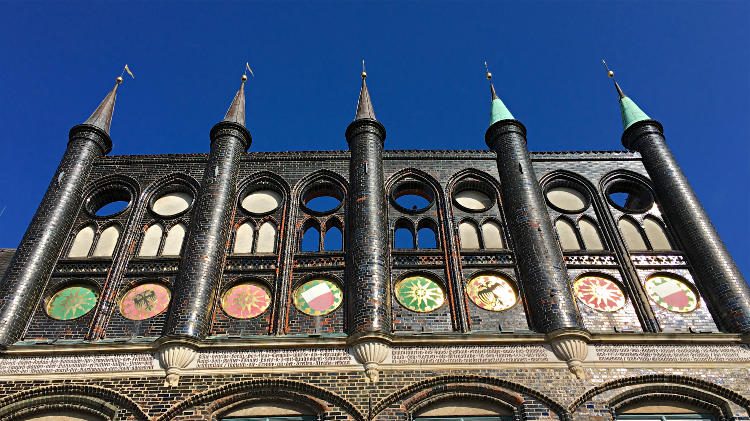 The German Baltic Coast city Lübeck has a wonderful old town located on an island in the Trave River. Lübeck preserved its original medieval town layout and has over a thousand listed historic buildings – both reasons contributing to its inclusion as one of more than 30 German sites on the UNESCO World Cultural Heritage list. Lübeck is best known for its magnificent Brick Gothic buildings including the Holsten Tor, Rathaus,and numerous churches including the Marienkirche, which served as model for many similar Brick Gothic churches that were built in the Baltic region. Lübeck is also famous as the birthtown of Nobel literary laureate Thomas Mann an the home of delicious Niederegger marzipan. The new European Hanse Museum explores the history of the Hanseatic League. 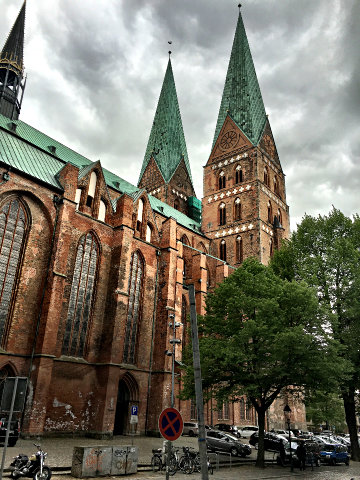 Lübeck was founded in 1143 and by 1226 was a free imperial city. During the 14th century, Lübeck grew to the third largest city in Germany. During the 14th and 15th centuries, the powerful Hanseatic League usually met in the Lübecker Rathaus, leading to Lübeck being referred to as “the Queen of the Hanse”.

From the 17th to early 20th century, Lübeck was in economic decline. It suffered from air raids early in the Second World War but after the war doubled in size due to the influx of refugees from German territories lost to Poland and Russia. Present day Lübeck is a clearly wealthy city of around 200,000 inhabitants.

Lübeck is mostly visit to see the marvellous old town on the island surrounded by the Trave River. Despite war damage, the old town is still filled with historic buildings with brick Gothic architecture particularly popular.

The Holstentor Gate in Lübeck 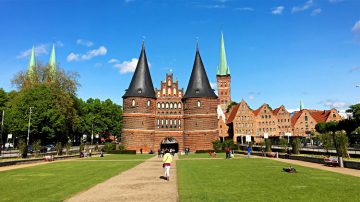 The symbol of Lübeck is the brick-Gothic Holstentor (town gate). The gate was erected during the 15th century when Lübeck was at the height of its power and wealth. It was built to impress and the actual defense purposes (and abilities) of this status symbol are rather limited.

The Holstentor is mostly photographed from the outside even though the facade facing the old town is more impressive. The Holstentor currently houses the local history museum. 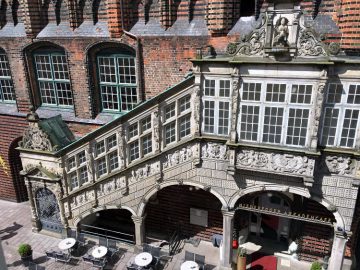 From the Holstentor, cross the Trave River into the island old town of Lübeck and turn left onto Breite Straße. The impressive brick-Gothic Rathaus (Town Hall) was where the representatives of the Hanseatic League usually met. 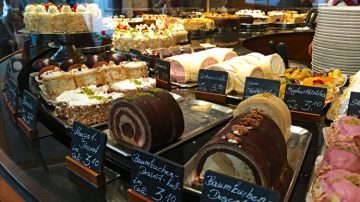 The modern Konditorei-Café Niederegger, tel 0451-530-1126, right across from the Rathaus is a heavenly place for coffee and cake or small meals and breakfasts. A small museum on the second floor explains the development of marzipan.

Niederegger did not invent marzipan but claims to have made it popular in Germany. It is still a major producer and although marzipan is not added to all food available in the café, it would be a shame to leave without at least sampling some. Although Niederegger marzipan products can be bought all over Germany and in most airport duty free shops, the shop here is the only one with 300 different products on offer.

The Brick-Gothic Marienkirche in Lübeck 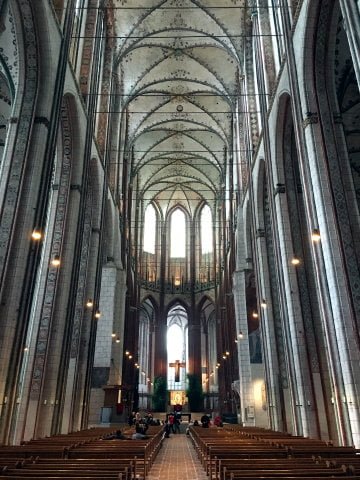 Behind the Rathaus is the lovely 13th-century, brick-Gothic Marienkirche (Mary’s Church) – Lübeck’s main contribution to European architecture. This marvelous brick building served as inspiration and prototype for the around 70 brick-Gothic churches that were built in the Baltic region.

The twin spires soar 125 m (410 ft) while the nave at 38.5 m (126 ft) is the highest brick nave in the world. Inside the light interior, note the two fallen bells at the back of the church. These bells were left where they fell after the British air raids on Lübeck in 1942 as a reminder of the destruction of war.

Many of the art works of the Marienkirche was lost in the fires after the bombing raid in 1942 but in contrast to the cathedral in the southern part of Lübeck, much of the building structure survived. 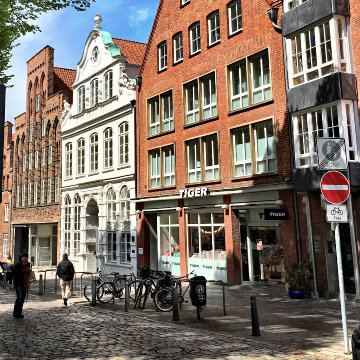 At the north of the Marienkirche church is the Baroque Buddenbrookhaus made famous in the novel Die Buddenbrooks, 1901, by 1929 Nobel literary laureate Thomas Mann. Thomas Mann, was not born in this house but it belonged to a family member and he spent many childhood summers here. The house is central in his novel on the decline and fall of a rich Lübeck mercantile family. A century on, Mann’s language is still modern and fresh.

The Buddenbrook house was damaged during the Second World War and only the façade is true to the original. The modern interior houses a museum dedicated to the brothers Thomas and Heinrich Mann, both accomplished writers who had to flee Nazi Germany.

The Buddenbrookhaus Museum is a must-see for German literature and Mann fans only. The displays and methods are a bit dated and the museum will close during 2019 for a much needed renewal and expansion.

The European Hanse Museum in Lübeck 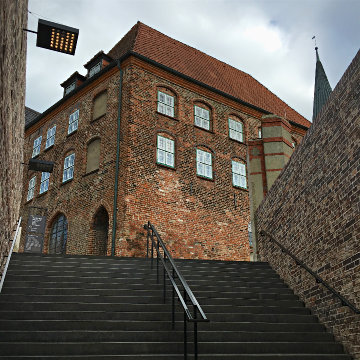 The European Hanse Museum is a beautiful combination of historic buildings and very modern architecture. The displays similarly use the most modern methods to bring life to historic events and items.

Lübeck has numerous other brick-Gothic buildings worth seeing while exploring the alleys and byways of this lovely historic old town.