The Aachener Domschatz is one of the most important treasuries in Europe with art related to Charlemagne, German royal coronations, liturgy, and relics. 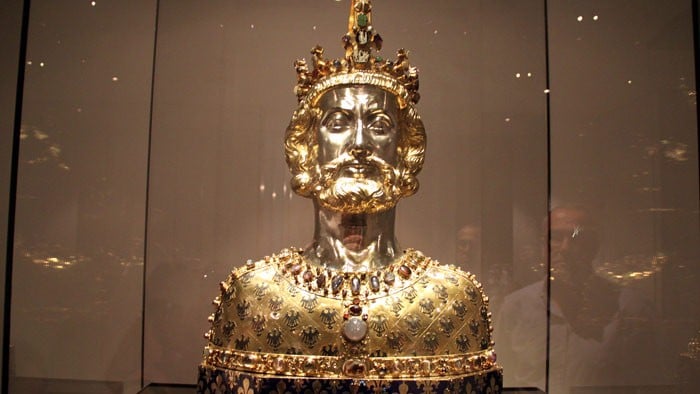 The Aachen Cathedral Treasury (Aachener Domschattz) is one of the largest and most important treasuries of medieval Christian artworks in Europe. The treasury has over a hundred works that are exhibited in a large museum adjacent to the Aachen Cathedral – the monumental church of Charlemagne, which together with the treasury were added to the first UNESCO World Cultural Heritage list in 1978. Some of the most important works include the bust of Charlemagne, the Lothar cross, and magnificent illuminated manuscripts.

The magnificent Aachener Domschatz is one of the most valuable collections of church artworks in the world. Aachen Cathedral famously was the palatine Mary chapel of Charlemagne completed around AD 800 and was the coronation church for German kings from 936 to 1531. 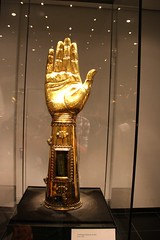 The Aachen Cathedral Treasure thus had a collection of artifacts worthy of the church’s high status during the Middle Ages. Despite a tumultuous history, most of the important items in the treasury have been preserved in the collection in Aachen itself.

The Aachener Domschatz museum currently has around 100 artworks on display in a large modernly equipped building adjacent to the Aachen Cathedral. The items are grouped into five main themes: items related to Charlemagne, liturgy, the coronation of German kings, Mary, and other relics.

Some of the most important items can be seen for free in the choir of Aachen Cathedral, including the shrine of Charlemagne (Karlsschrein), the shrine of Mary (Marienschrein), the pulpit of Henry II (Heinrichkanzel), and the Pala d’Oro altarpiece.

Charlemagne Items in the Aachen Treasury 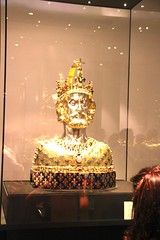 Some of the most famous and most impressive items in the Aachener Domschatz are related, or were thought to have been related, to Charlemagne.

The most famous item in this collection is probably the Karlsbüste (Bust of Charlemagne). This silver-gilt bust, which inspired many similar reliquaries, was made on the orders of King Charles IV (Karl IV) in the mid-14thcentury. It contains the skullcap of Charlemagne, which was removed from his shrine (in the choir of the cathedral). A further reliquary has an arm bone of Charlemagne. 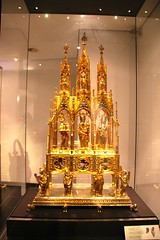 On view in the treasury is also the 3rd-century marble Persephone sarcophagus in which Charlemagne was originally buried in his palatine chapel on January 28, 814 – the day of his death.

A further item that may have belonged to Charlemagne is the Hunting Knife of Charlemagne. This knife is from the right period but its sheath is two centuries too new to have been the emperor’s property. This steel knife, together with a similar one in Bamberg, are the only medieval steel knives that have been preserved in Germany other than unintentional survivors found at archaeological sites.

On display nearby is the Hunting Horn of Charlemagne. However, this olifant (horn made of an elephant tusk) is now known to be from the 11th century. In the Song of Roland, Roland famously died while blowing an olifant so loud when summoning Charlemagne’s assistance that his temples burst.

Liturgy Items in the Aachener Domschatz

The second main theme in the Aachen Cathedral Treasury is items related to the liturgy. Several impressive pieces are on display. 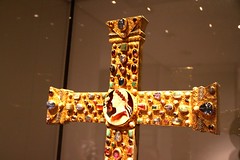 The most famous item here is probably the Cross of Lothar (Lotharkreuz). This half-meter tall Ottonian processional cross dates from around AD 1000 and is still in occasional use. The oak cross is encased in gold and silver and adorned with over a hundred gemstones and 35 pearls. The cameo of Emperor Augustus at the crossing is from the first century. The back, in contrast, is plain with a simple engraving of Christ on the Cross. 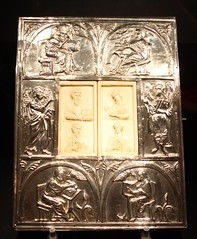 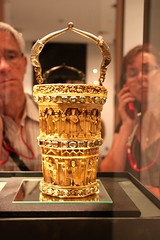 For six centuries, from 936 (Otto I) to 1531 (Ferdinand I), at least 31 out of around 40 German kings were crowned in the Aachen Cathedral using the throne of Charlemagne (Karlsthron).

Original items related to the German royal coronations on display include:

Copies of other imperial insignia, including the Stephansburse (St Stephan’s Purse) that was placed in the throne of Charlemagne during the ceremony, are also on display in the treasury. The originals are now kept in the Hofburg in Vienna, Austria. (Similar copies can be seen in Frankfurt – where coronations took place after 1531 – and Nuremberg (Nürnberg), which is still pursuing legal avenues to get the originals back from Vienna.)

Relics and Reliquaries in the Aachener Domschatz

Aachen was an important pilgrimage destination during the Middle Ages and even today Aachen attracts many pilgrims from all over Europe.

The relics and reliquaries in the Aachen Treasury are grouped as items related to Mary, mother of Christ (as the Aachen Cathedral was originally the Royal Chapel of Mary), and other relics not related to her or Charlemagne.

The most important relics are kept in the Marienschrein in the choir of the cathedral. This shrine is only open every seven years (next in June 2021). 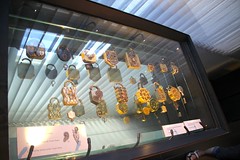 The Mary Shrine is sealed with a new lock after each pilgrimage period. The key is cut in two with the church and the town government each keeping a half. Several previous locks and keys are on display in the treasury with the art revealing the art tastes (and economic conditions) at the time of manufacture.

Other relics and reliquaries are from various parts of Europe and were mostly donated to the church by religious leaders and other important visitors.

The treasury also has a large collection of textiles. These are displayed in rotation to preserve the color and integrity of the materials.

Opening Hours and Tickets for the Aachen Cathedral Treasury 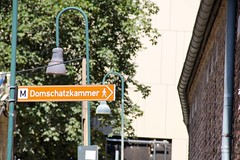 The Aachen Cathedral Treasury (Aachener Domschatz) is open Monday from 10 am to 2 pm, and the rest of the week from 10 am to 5 pm (closing 6 pm from April to December). The treasury is closed on many holidays.

Admission tickets are €5 for adults and €4 for children and students. (Children under 18 enter for free with a parent.) Audio guides are available in several languages. Items on display are titled in German and English but further explanations are limited.

Entry to the Treasury is through the so-called small dragon gate – a Gothic entrance a block from the western entrance to the Aachen Cathedral, right across the road from the cathedral information center.