Aachen Cathedral’s core was built by Charlemagne but later additions enlarged the palatine chapel that became the coronation church of German kings. 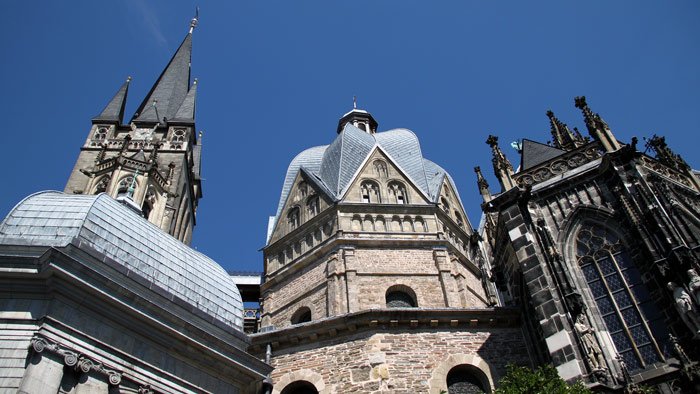 Aachen Cathedral (Aachener Dom) in western Germany is one of the oldest continuously in use buildings in Germany. The octagonal core of the church was built by Charlemagne as a Mary chapel attached to his palace in Aix-la-Chapelle or Aachen. Two centuries after Charlemagne’s death, the church became the coronation church for German kings for near six centuries. Romanesque, Gothic, and Baroque additions added to the church but the basic original octagon is still the heart of the church that contains the original marble throne of Charlemagne, as well as a Romanesque gilded shrine that now contains his remains.

The Building of Aachen Cathedral 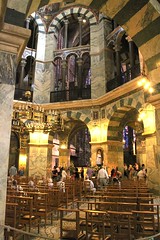 The Aachener Dom was originally the palatine chapel (Pfalzkapelle) of Charlemagne’s palace in Aachen. This partly explains why it is relatively small, although at the time of construction it was the largest church north of the Alps. The church was in use by 800. Legend has that Pope Leo III, who crowned Charlemagne emperor on Christmas Day 800 in Rome, dedicated the chapel in 805 but that is pure fiction.

The chapel was dedicated to Mary, mother of Christ, and thus was for centuries known as the Royal Chapel of St Mary. In later years, it was also often referred to as the Kaiserdom, as it was for centuries the coronation church of German kings (who were mostly also the Holy Roman Emperors). The Aachener Dom only became a cathedral in the sense of it being a seat of a bishop in 1930. 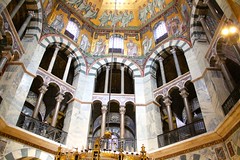 At the core of the Aachen Cathedral is the original octagon that formed the chapel of Charlemagne. It was built between 796 and 805 and was clearly influenced by St Vitale in Ravenna – Charlemagne’s empire included Lombardy in northern Italy and he visited Ravenna in person several times. These influences are more obvious in the mosaics, although these are 19th-century additions and mostly not true to the original.

The octagon with its 31.5-m high cupola is the original Carolingian structure. Almost everything else in this church, with the notable exception of the marble Karlsthron (the imperial throne), are later additions, including all of the decorations. Most of the decorations inside the church were added in the 19th century when Aachen came into the possession of Prussia – the medieval art and reliquaries are now mostly in the treasury. 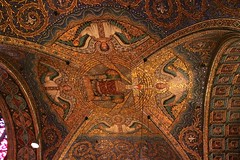 At a time when most Gothic and Romanesque churches were stripped off their colorful decorations in an erroneous belief that medieval churches were bare and the color added later, the Prussians went against the trend and really add color and bling to this Dom. The Prussian kings (and later German Emperors) were fascinated by Byzantium and this accounts for the mosaics that were added. It is debatable whether the mosaics ruined the church but they are at least of very high artistic value and largely in line with what was done in similar churches from the late first millennium (vide St Vitale in Ravenna and St Marco in Venice). The cupola had a mosaic similar to the current addition but the rest of the walls and vaulted ceilings were painted and not fitted with mosaics in the times of Charlemagne. 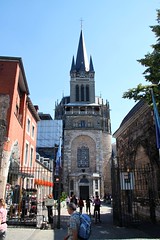 The mighty Westwork (western facade) of Aachen Cathedral is clearly Carolingian and Romanesque with a few Neo-Gothic additions. The Carolingian westwork was somewhat altered through the centuries but the lower floors are roughly as it was in the time of Charlemagne. During the 19th century, many later additions were removed from the towers to bring them visually more in line with the original. The tower was only completed in the late 19th century.

The small portal was added in the 18th century. The magnificent bronze doors are the originals from the time of Charlemagne and were moved here from the original entrance to the chapel. 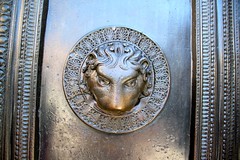 The bronze Wolftür (wolf’s door) has two lion heads – inside the mouth of one lion it is possible to feel the finger of the devil. According to legend, the devil helped to build the church in exchange for the soul of the first one to enter the church. He was expecting the soul of the bishop but a wolverine was chased in and the devil broke off his finger when he slammed the door in anger. According to tradition, anyone who can remove the finger of the devil from the mouth of the lion will be awarded a golden cloak. 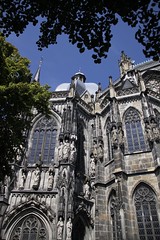 The octagon is the original Carolingian structure while the Baroque roof canopy — looking a bit like a citrus press — with a faux lantern is from the late 17th century. If nothing else, it is distinctive making the church instantly recognizable from almost any angle.

It is easy to see where the rough stonework of the Carolingian octagon goes over into smoother more modern building techniques. During the times of Charlemagne, the exterior of the chapel would have been plastered and painted red.

The Gothic choir of Aachen cathedral is a masterpiece of the genre. It replaced a probably rectangular or square Carolingian structure between 1355 and 1414. The side chapels are also mostly from around this era or later baroque.

Next → The Interior of Aachen Cathedral