The choir of the Aachener Dom contains the shrine of Charlemagne, further relics, and magnificent Ottonian and Romanesque art. 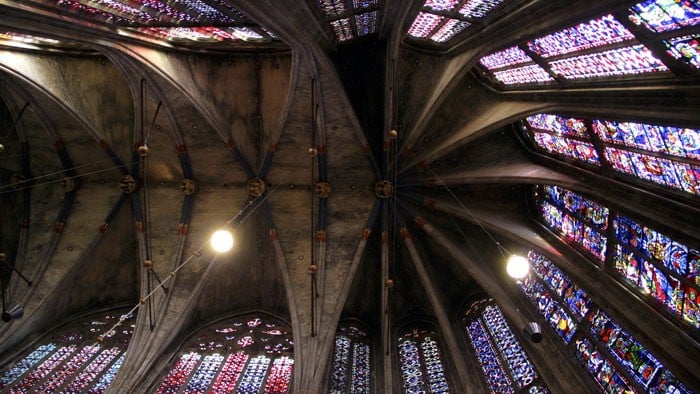 The magnificent choir area of the Aachen Cathedral in western Germany has the remains of Charlemagne (Karl der Grosse / Charles the Great) in a large gilded early 13th-century shrine (Karlsschrein). The Mary shrine (Marienschrein) from the same era is a reliquary with relics shown only every seventh year. Even older are the Ottonian-Renaissance golden ambon (pulpit) of Henry II and the Pala d’Oro altarpiece. The grave of Otto III is also in the choir of Aachen Cathedral. Most items in the choir area can be seen reasonably well from the church itself. The choir area may only be entered when on a guided tour, which includes a visit to the upper church and the throne of Charlemagne, which otherwise cannot be seen at all from the lower level of the church. 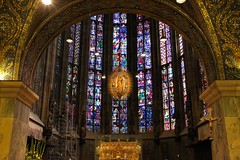 The High Gothic choir of Aachen Cathedral was added to the Carolingian octagonal chapel between 1355 and 1414. The choir was inspired by Sainte Chappelle in Paris and built to be a glass reliquary to house the remains of Charlemagne and other relics. 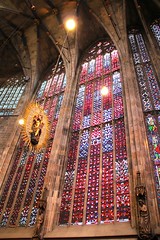 The choir is 37 m long, 21 m wide and at 33 m high, a few meters higher than the octagonal nave of the cathedral.

Being of a late Gothic building period, the glass to stone ratio of the Aachen choir is remarkably high accounting for its nickname as the Glasshaus (glasshouse) of Aachen. The glass area is around a 1000 m2 with the four 27-m high windows counting amongst the tallest medieval Gothic windows anywhere.

All the original glass was blown out during the Second World War and replaced in 1949-51 by mostly modern designs by Walther Benner and Anton Wendling.

The Gilded Shrines in Aachen Cathedral 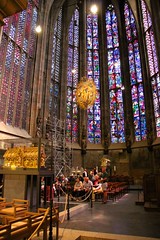 The main attractions to see in the choir of Aachen Cathedral are the two large gilded shrines with the remains of Charlemagne and important relics. These late Romanesque reliquaries are as interesting for the magnificent art as for the politics — power play at the highest levels of medieval society.

The two shrines sum up the struggle for ultimate power between the church and state – a vicious fight that ravished much of the Holy Roman Empire during much of its existence. The choir of Aachen Cathedral was the preserve of the church so the Mary Shrine ordered by the church is placed closer to the high altar than the shrine of Charlemagne donated by the emperor. The symbols and inscriptions are even more blatant.

The Karlsschrein was completed in 1215 by local goldsmiths on the orders of the Holy Roman Emperor. It is considered one of the most important late Romanesque artworks in existence.

The shrine is in the form of a basilica without a protruding transept. The oak box is covered by gilt silver and gilt copper and adorned with precious stones, enamel, and filigree. It is up 204 cm long, 57 cm wide, and 94 cm high. 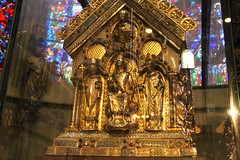 The symbolism used on the Karlsschrein is pure politics rather than religion. On the front panel of the shrine, Charlemagne is placed between Pope Leo III and the bishop of Reims – traditionally, this position is reserved for Christ. It gets even more blatant – Charlemagne sits on his throne but even seated he towers over the two religious leaders who are standing at his sides.

Furthermore, Christ appears on a medallion above Charlemagne. The message is clear: Charlemagne (and by extension the Holy Roman Emperor) is the chosen representative of God on earth. 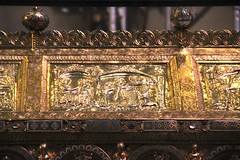 Further symbols entrench the importance of chosen rulers — on the sides of the shrine are 16 German kings and emperors rather than the customary apostles and saints. The reliefs on the roof of the shrine are scenes from a romanticized version of Charlemagne’s rule as emperor rather than saintly deeds.

The struggle between church and state lasted centuries. Charlemagne was famously crowned by Pope Leo III on Christmas Day 800. Charlemagne afterward apparently claimed if he knew what the pope had planned, he would not have gone to church that day. It gave the impression that the Pope had the right to crown the emperor — for centuries, the German king was crowned in Aachen (and later Frankfurt) as King of Germany but had to travel to Rome to be crowned by the Pope before his title changed from Emperor Elect to Holy Roman Emperor. Napoleon, who knew his history, crowned himself in the presence of the pope to make it unmistakable who had the power to crown. 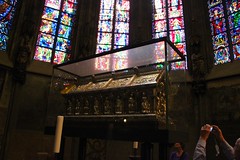 The remains of Charlemagne were placed in the shrine by Friedrich II (Frederick II) in person on July 27, 1215 – two days after he was crowned formally (his earlier coronation as king of Germany in 1212 in Mainz was disputed). The act was highly symbolic as his grandfather, Friedrich I Barbarossa (Frederick I Red Beard), had Charlemagne’s tomb opened in 1165 and the same year had the anti-pope he supported declare Charlemagne a saint (something not accepted by the mainstream church although Charlemagne is still revered in some parts of Europe, including Müstair in Switzerland with a fantastic collection of Carolingian wall paintings). 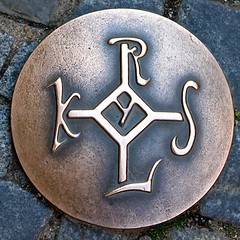 The original tomb of Charlemagne – at a now unknown place in the chapel – was opened a few times during the Middle Ages. The sarcophagus in which he was laid on the day of his death on January 28, 814, can be seen in the Treasury of the cathedral. His skullcap, leg arm, and a few other bits are in reliquaries – mostly in the local treasury.

His reliquary was last opened in 1874 for research purposes. The study of the bones confirmed that it is highly likely that these remains are really those of Charlemagne (and not a forgery as many, if not most, medieval relics clearly are).

For a complete description of the scenes and wording on the Karlsschrein, see Deutsche Inschriften Online (in German and Latin). 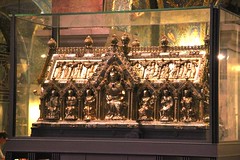 The Marienschrein (Mary Shrine) is slightly newer than the Karlsschrein — it was made between 1220 and 1239 on the order of the local chapter of Mary. This gilded chest with well over a thousand precious stones shows clear elements from the transition from the Romanesque to the Gothic period and is considered one of the most important goldsmith works of the era.

In contrast to the Karlsschrein, the Mary shrine is in the form of a church with a slightly protruding transept. It generally follows traditional religious themes and iconography, although it has been altered through the centuries.

The Mary Shrine is said to contain the following relics:

(Relics were the “the paradigm has shifted” internet stocks of the Middle Ages.) 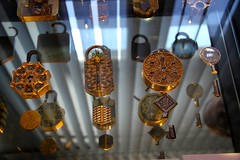 The Marienschrein is opened only every seven years during the Aachener Heiligtumsfahrt (Aachen Pilgrimage) by breaking the lock with a small hammer. Afterward, it is closed again with a new lock – its design reflecting the times both in terms of art style and economic conditions. (Several locks and keys can be seen in the Treasury.) The key is then cut in two with the church and town mayor each keeping half.

The next pilgrimage will be mid-2021.

Similar shrines can also be seen in nearby Maastricht (Saint Servatius) and probably most famous in Cologne, where the huge gilded shrine of the Magi has the remains of the three kings. 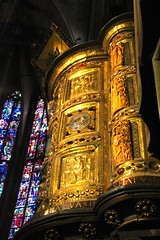 Two large magnificent Ottonian-Renaissance goldsmith works in the choir of Aachen Cathedral are clearly visible from the main chapel too: the ambon of Henry II and the Pala d’Oro altarpiece. Both are from the late-Ottonian Renaissance period (early 11th century) and made by local goldsmiths.

The Heinrichkanzel (Ambon of Henry II) was erected by the last Ottonian Emperor Heinrich II (Henry II) between 1002 and 1014. This gilded pulpit on an oak base contains many ancient works and stones.

The Pala d’Oro is the centerpiece of the High Altar in Aachen Cathedral. It was originally probably part of a much larger work. It was made around 1020 of 17 individual gold panels depicting the enthronement of Christ as well as scenes from his life. 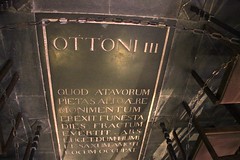 The grave of Otto III (980-1002) can be seen in the choir. It is marked by a carving on a simple stone. He is the only German king to have been buried in Aachen. Otto III became German king aged 3, resulting in several attempts by other high nobility to take power. He was only crowned emperor in 996. He was considered exceptionally intelligent but died aged 21, having ruled in effect less than six years.

More medieval art and reliquaries can be seen in the treasury of Aachen Cathedral – one of the most important collections in Europe. 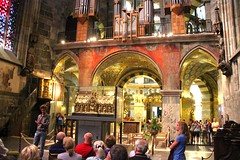 The choir area of the Aachener Dom may only be entered by visitors on a guided tour of the cathedral. The tour also allows visitors to see the throne of Charlemagne on the upper level of the church – something that otherwise cannot be seen at all.

See Visiting Aachen Cathedral for more details on the tour and hours.

Next → The Treasury of Aachen Cathedral