The convent of St John’s in Müstair in Graubünden is a UNESCO World Cultural Heritage listed site mostly visited for its magnificent Carolingian and Romanesque frescoes, the most important cycle of figurative murals in Switzerland. Also worth seeing are the Carolingian architecture of the church and Holy Cross Chapel, the oldest multistory fortress in the Alps and a small museum in the working Benedictine convent. Getting to Müstair by car or postal bus is in itself a beautiful journey down the Müstair Valley from Engadin.

The Convent of St John the Baptist in Müstair is referred to in German as Kloster Sankt Johann and in the local Romansch as Clostra Son Jon. The village has been known since 1923 by the Romansch name Müstair rather than the German Münster. It is the easternmost village in Switzerland – the Italian border is just over a kilometer from the monastery.

The Convent of St John in Müstair, Graubünden 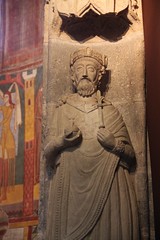 According to legend, Charlemagne personally ordered the foundation of a Benedictine monastery in Müstair around 775 AD to give thanks for his safe passage of the Alps en route from his coronation as King of the Lombards (and for strategic reasons to protect the entrance to the Müstair valley). The dates match the time of the felling of the original timbers used in the construction and the foundation legend may thus well be true, although the initiative may also have come from the bishop of Chur.

Of the original Benedictine monastery, only the St John’s Church and the Chapel of the Holy Cross survived. Admission to the church is free while the chapel is currently closed for restoration.

The fortified Planta tower was erected around 960 to provide protection against barbarians threatening the empire of Otto I. It is considered the oldest fortified residential tower in the Alps. The swallowtail merlons and most windows were only added around 1500. Much of the convent museum is inside this tower. 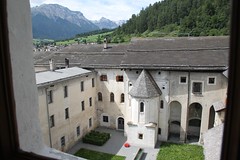 Casual visitors can only see the exterior of the 11th century chapels of St Ulrich and St Nicholas, which were erected shortly before the monks vacated the premises and a new convent was established. Currently, around 12 nuns live in the priory.

Most of the other buildings giving the convent its present appearance date from around 1500. This include the bell tower erected in 1530 to mark the event where the abbess convinced the local population to reject the Reformation and in return received the use of the convent church in perpetuity.

The original Carolingian church of the St John’s monastery in Müstair survived largely intact. The floor plan of the triple-nave church, with two side annexes, fits inside a square of 80 x 80 Carolingian feet. The walls were mostly smooth, except for the typical three apses on the east end.

The frescoes on the interior walls of the church date mostly from the early 9th century. At the top level are scenes from the live of David while most others are from the live of Christ. The west wall shows the Last Judgment.

On the east side are Carolingian paintings in the apses detailing the lives of St John the Baptist (central), St Peter and St Paul (north) and St Stephan (south). The lower, brightly colored frescoes are Romanesque from around 1200. Other Romanesque frescoes higher up in the apses either fell down or were removed.

During the reign of Abbess Angelina Planta (1478-1509), Gothic detailing was added to the church – most noticeably the Gothic vaulting that changed the original Carolingian flat-ceiling, hall church into a typically Gothic triple-nave design. Larger windows were cut into the south wall that further destroyed several paintings.

The Museum of the Convent of St John 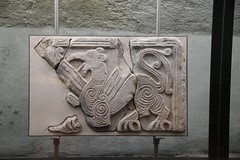 A small museum on the Convent of St John explains the history of the convent and has some further items from the church. The ticket office is at the entrance to the monastery complex near the Chapel of the Holy Cross but the actual entrance into the museum is from the door at the back of the church. (Ring the bell after buying tickets.)

The museum is mostly in the Planta Tower with small parts in the cloisters – with views of the adjacent buildings – and the former bishop’s palace. It was long though that the tower was erected by Planta, who saved and restored the monastery in Gothic style following the Swabian Wars. However, only during the 1990s has it conclusively been proven that the building is indeed from 960 AD. 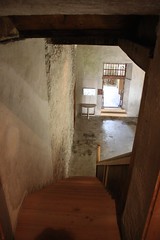 The museum has information on both the building history of the church and monastery, as well as daily life in a convent. Historic and reconstructed nun’s cells can be visited while visitors also see some of the wood paneled rooms, refectory, kitchen and work rooms.

Information in the museum is in German and Romansch – ask for the English leaflet of buy the small guide when buying tickets.

It is up and down several flights of very steep stairs making the museum totally unsuitable to the infirm or wheelchair users.

Chapel of the Holy Cross in Müstair

The Chapel of the Holy Cross (Heiligkreuzkapelle) in Müstair was long considered Romanesque but recent research proved that it is Carolingian and from the same building period as the church.

The double-storied chapel now stands alone near the entrance to the complex but originally was attached to other monastery buildings giving the abbot and other dignitaries direct access to the upper level. 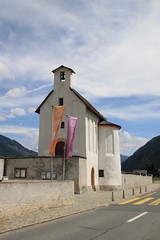 The wooden ceiling between the two floors was installed after a fire in 1021. Some of the beams are from 788 making it the oldest dated weight-bearing wooden ceiling in Europe.

In the upper chapel, several layers of painting were found. Research and restoration are ongoing without a final decision on which paintings will be preserved on the walls. Newer ones will be moved into the museum.

The gable with bell dates from 1518. The roof structure is similarly from a later period and too steep for a Carolingian building.

The church and museum of the Convent of St John in Müstair are opened daily, except on December 25. 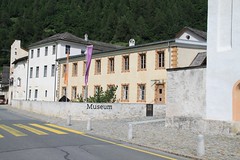 Admission to the church is free, CHF12 to the museum – CHF6 for school children and students. The Swiss Museum Pass is valid. Guided tours of the church and museum are optional. 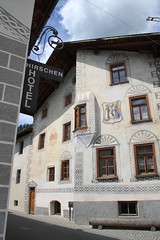 The Holy Cross Chapel is currently closed for renovations but otherwise can only be seen as part of a guided tour.

The church and museum are not heated.

Müstair has several pleasant restaurants, which tend to serve portions assuming the diner has either hiked in the mountains in the morning or is planning on doing so after lunch.

The convent also has a few guest rooms available to any guests keen on a quiet retreat.

Müstair is at the lower entrance to the Val Müstair only a few meters from the Swiss-Italian border. Driving here is easy along the Offen pass road through the Swiss National Park from Zernaz in the Engadin Valley. Driving from the Engadin Valley via Austria and Italy are also good options.

Ample free parking is available directly across the road from the monastery.

The Swiss postal bus (Postbus / Car Postale) also offers services in the Müstair Valley with the bus stop in the parking lot in front of the monastery. 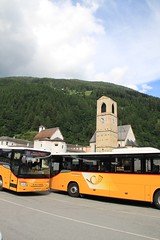 Bicycles can be carried on most buses but usually require at least a day advance reservation.

Monasteries were central to reign of Charlemagne and many in Europe can claim a similar foundation history or some links to Charlemagne. On the north side of the Alps are two further related UNESCO World Cultural Heritage listed sites: the magnificent Baroque library and church in St Gallen (Switzerland) and the three Romanesque churches on Reichenau Island (Germany) with some of the oldest and best-preserved pre-1000 AD wall paintings north of the Alps.