The Rococo library hall and cathedral are amongst the best Baroque architecture in Switzerland and the top sights to see in the St Gallen monastery complex.

The top sight to see in the lovely Swiss city Sankt Gallen (Saint-Gall in French) is the Baroque monastery complex with its magnificent Rococo library and impressive cathedral. The former Benedictine monastery of St Gallen has Carolingian roots but visitors come to see the Baroque convent built during the mid-eighteenth century. The highlight is the library, which apart from the important historical documents in its collection, is beautifully decorated in a typical south German Rococo style. The former abbey church, now a cathedral, is also a splendid example of Baroque architecture in Switzerland.

The monastery district (Stiftsbezirk) of St Gallen is inscribed on the UNESCO World Cultural Heritage list as a good example of a large Benedictine Carolingian monastery that has been a center of learning for a continuous period of more than a millennium. The library collection of handwritten manuscripts is of particular historical importance.

St Gallen’s monastery tradition goes back to 747 when a Benedictine monastery was founded here. By 818, the abbey received imperial privileges and immunities, which saw the abbot independent from local church authorities. From 1206 onwards, as princes of the realm, the abbots would rule the monastery and further lands until Napoleonic troops occupied St Gallen in 1798. The abbey was formally disbanded in 1805.

St Gallen’s glory period was the ninth and tenth centuries when the abbey was one of the most important centers of learning in Europe and a leader in the fields of science and culture. It is somewhat ironic that most visitors now visit St Gallen to see the mid-eighteenth-century Baroque architecture erected only decades before the dissolution of the abbey. (Fine Romanesque architecture from the turn of the first millennium – including three large churches – can be seen on Reichenau Island in Lake Constance, Germany). 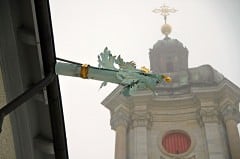 The only parts of the Baroque monastery buildings in St Gallen open to most visitors are the magnificent library and the cathedral. Both are amongst the best examples of Baroque architecture in Switzerland. Signposting to the library (Stiftsbibliothek), the entrance is from a courtyard inside the monastery complex, is clear from either end of the church.

The Rococo library (Barocksaal der Stiftsbibliothek) of St Gallen has a collection of 160,000 books including around 400 manuscripts older than a thousand years. The exhibition of historic works in glass display cases changes annually in November. However, these important manuscripts are mostly overwhelmed by the fresco paintings by Joseph Wannenmacher, stuccowork, and magnificently carved woodwork.

The Abbey Library (Stiftsbibliothek) of St Gallen is the oldest functioning library in Switzerland. Books printed after 1900 may be borrowed while older documents may be studied in the reading room. Many books, including all works from before AD 1000 are available freely in the Codices Electronici Sangallenses (Digital Abbey Library of St. Gall).

Admission to the Rococo library hall of St Gallen is CHF10 for adults and a surprisingly steep CHF7 for children over 6 and students. Felt slippers are provided to protect the wooden floor. Admission includes a visit to the Baroque library hall (tour optional), a lapidarium in the cellars with stonework dating back to Carolingian and Ottonian periods, and a few minor exhibits and charts explaining the history and development of St Gallen. If time is limited, visit only the library – the other exhibits are rather specialized and of little general interest.

The Rococo library hall is open daily from 10 am to 5 pm (4 pm on Sunday). It is mostly closed during November and on many holidays.

The Baroque Cathedral of St Gallen

The former St Gallen abbey church (Stiftskirche) – it became a cathedral (Kathedrale) only in 1836 – has been rebuilt numerous times since the foundation of the monastery in the eighth century. The present church was erected between 1755 and 1767 by Peter Thumb and Johann Michael Beer. The church is typical late Baroque inside and out.

The interior of the church is bright, in part due to the walls in the nave being mostly white. In typical Baroque fashion, the decorations increase dramatically towards the ceiling, representing heaven, and towards the choir of the church. The casein paintings in the dome of the Eight Beatitudes are by Joseph Wannenmacher while Christian Wenzinger designed most of the stuccowork.

The cathedral of St Gallen is open daily from 9 am to 6 pm. As a functioning Roman Catholic church, admission to the Gallen is free but restricted during religious services.

The old town of St Gallen is pretty with several interesting building facades and narrow streets worth exploring. However, to see Romanesque churches in the style from the heyday of the monastery, it is necessary to travel 50 km northwards to Reichenau in Germany.

It is also worth crossing the Alps to Müstair in the far southeastern corner of the Swiss canton Graubünden. The UNESCO-listed Convent of St John here has the most important cycle of Carolingian frescoes preserved in situ.