Remains of the Berlin Wall within easy access of the city center are near Potsdamer Platz, at the East Side Gallery, and in Bernauer Straße with documentation center.

Very little remains of the once 106 km (64 mile) long Berlin Wall that encircled West Berlin from 1961 to 1989. After the collapse of the Communist regime in East Germany, the Germans got rid of the Berliner Mauer at breakneck speed. Today, only stones in the streets and pavements of Berlin mark where the Wall once stood.

Three large remaining sections of the Berlin Wall are within relatively easy reach from the tourist center of Berlin. The Wall rests at the Topography des Terrors in between Potsdamer Platz and Checkpoint Charlie are generally the easiest to get to, the East Side Gallery is the longest surviving section, while the Berlin Wall with documentation center and memorial in Bernauer Straße is the most interesting to visit.

The remaining part of the Berlin Wall at the Topographie des Terrors in Niederkirchnerstraße is within easy reach of other popular tourist sites in Berlin. It is a short walk from either Potsdamer Platz or Checkpoint Charlie. This is the longest section of the wall facing West Berlin that is still standing.

From Potsdamer Platz, walk down Stresemannstraße and turn left into Niederkirchnerstraße at the Martin Grophius Bau. From Checkpoint Charlie, follow the stones marking the location of the original Wall down Zimmerstraße to Wilhelmstraße.

The around 200-m Mauer rests here are in a dilapidated state with iron bars protruding out of the concrete. Much of the damage is due to the outer layer of the wall having been chipped away by souvenir hunters.

Behind the remaining Wall, a memorial and documentation center is being erected as the head offices of the Gestapo were housed here. Across the road, is the former head quarters of the air force – the only Nazi-era government building that survived to the present in Berlin. It is now being used by the finance ministry.

The East Side Gallery on the Berlin Wall near Ostbahnhof

The longest surviving piece of the Berlin Wall is the 1.3-km (0.8-mile) section of the Wall facing the Spree River between the Ostbahnhof and the Oberbaumbrücke. On this part of the Wall, artists from 21 countries painted 106 pictures in 1990 (most were restored during 2009). This part of the wall was an inner wall on the East Berlin side and not the tallest part that faced West Berlin directly.

The two most famous paintings of the East Side Gallery are probably Soviet-leader Brezhnev kissing East German-leader Erich Honecker and a Trabi car bursting through the Wall. The themes of other painting range from the slightly bizarre to political slogans and personal memorials. 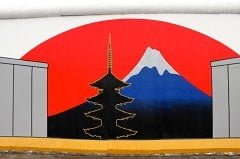 S-Bahn stations are conveniently near to each end of the East Side Gallery – the Ostbahnhof and Warschauer Straße (lines S3, S5, S7 and S9). To see the wall from across the Spree River, use U-Bahn station Schlessisches Tor (line U1) on the West Berlin side and cross the river back to the Wall via the nineteenth-century Oberbaumbrücke. The Wall facing the Spree River is currently painted white and very much overshadowed by the huge, modern O2 World arena.

The most interesting remaining section of the Berlin Wall is in Bernauer Straße. Here, 200-m of the Wall survived together with the death strip and second wall that were part of the elaborate border structure. Also of interest here is the free Berlin Wall Documentation Center (Dokumentationszentrum) with a viewing platform and the Berlin Wall Memorial (Gedenkstätte Berliner Mauer).

The Wall rests in Bernauer Street is a short walk from the Nordbahnhof S-Bahn station (lines S1, S2, And S25), where further border walls and structures can be seen. The less convenient U-Bahn station Bernauer Straße (lines U8) is around three blocks from the Wall and documentation center.

The DDR Museum Berlin has information on life in the former German Democratic Republic (East Germany) while the Wall Museum Haus am Checkpoint Charlie has more on successful and unsuccessful attempts to flee the DDR, including cars and other equipment that were used to escape to the West. However, the most interesting museums dealing with the DDR era and the end of the division of Germany are in Leipzig and not in Berlin.