Getting to Grenoble, gateway to the French Alps and ski resorts, is easy. TGV trains run from Paris and cheap flights to GNB arrive from London and European airports. 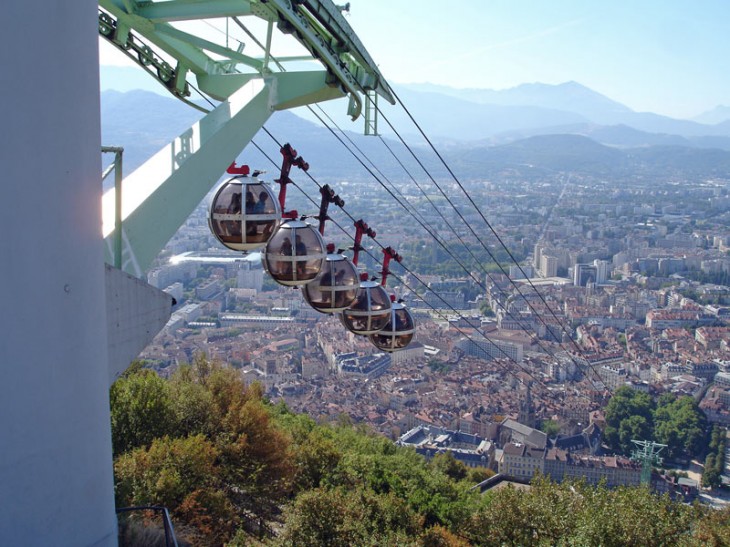 Transportation options to Grenoble are plentiful as this lovely town in the Isère Valley is the gateway to the French Alps and France’s most popular ski and winter sport resorts. Cheap flights, especially from London and other British cities, go to Grenoble Airport (GNB) while both Lyon Airport and Geneva Airport offer viable alternatives. TGV trains arrive from Paris while local trains go to nearby towns including Chambéry, Annecy, and Lyon. Excellent highways in the valleys allow for fast driving times and numerous bus services offer public transportation options to places not served by trains.

Driving to Grenoble in Isère, France

Grenoble is the capital of the French department Isère. The town is surrounded by beautiful mountains but Grenoble itself is in the Isère Valley, allowing for fast and easy driving along several major highways (autoroutes). From these mostly toll roads, drivers can enjoy spectacular mountain views without having to deal with the hassles of driving in the mountains itself.

Grenoble is at the intersection of several autoroutes: the A41 goes from Grenoble to Chambéry, Annecy, and Geneva, the A48 to Lyon, and the A49 to Valence and the Mediterranean. Roads passing through major Alpine passes to Italy are nearby while the Route de Napoleon (mostly the N85) goes to Gap and Provence.

Driving distances and times to Grenoble are from:

Flying to Grenoble-Isère Airport (GNB) is a great option in winter when low-cost budget airlines from especially the UK and Ireland have cheap flights to Grenoble to bring skiers close to France’s best-known ski resorts. Flights from London and Dublin to Grenoble on Ryanair are the only flights that currently operate year round.

Most travelers to Grenoble arriving by air will have to fly to either Lyon Airport (LYS) or Geneva Airport (GVA) in Switzerland. Shuttle buses generally offer the fastest transportation from these two airports to Grenoble.

Traveling by Train to Grenoble

Grenoble can easily be reached by train from most parts of France. Fast TGV trains make the railways the best option when traveling from Paris while cheaper local trains give direct connections to closer centers such as Lyon and Annecy.

TGV trains connect Paris-Gare de Lyon station and Grenoble in around three hours a few times per day – the actual frequency depends on the season and day of the week. Some TGV trains stop en route at Lyon-St Exupery (Lyon Airport), about an hour from Grenoble. TGV trains to Grenoble stop only at Lyon-Airport and not at any of the downtown station in Lyon itself.

All other trains traveling to Grenoble are classified as local trains. Very frequent connections are available to Chambéry (45 to 65 min), Aix-les-Bains (1h), and Annecy (1h15). Trains to Lyon go mostly to Lyon-Part Dieu (1h30) and occasionally to Lyon-Perrache (2h). Probably the most beautiful train journey from Grenoble is the two-hour ride to Gap.

Train travel between Grenoble and Geneva in Switzerland can be frustratingly slow and cumbersome. It is worth trying to time travel to the two daily direct trains that take just over two hours. Otherwise, multiple transfers or major detours are required with traveling time often well over three hours.

Bus Travel in the Grenoble Region

Grenoble is the capital of the department Isère, which has an extensive bus network to transport locals and visitors alike to the many mountain resorts and towns not served by the French railway network. Most buses in the region are operated by Transisère but to Lyon-St Exupéry Airport (LYS) use Faure Vercors buses (up to 35 buses per day) while Aerocar has a few buses per day via Chambéry to Geneva Airport (GVA). Faure Vercors buses also offer a shuttle service taking an hour to connect with SCNF trains in Valence.

Grenoble is the cultural and commercial center of the French Alps making the town a popular shopping and cultural day-trip destination from Alpine ski resorts.. The top sights in Grenoble include the téléphérique cable car to the Bastille fort, an interesting old town center, and excellent art museums.