The US Military Cemetery in Colleville-sur-Mer above Omaha Beach is the largest allied war cemetery in Normandy, France. 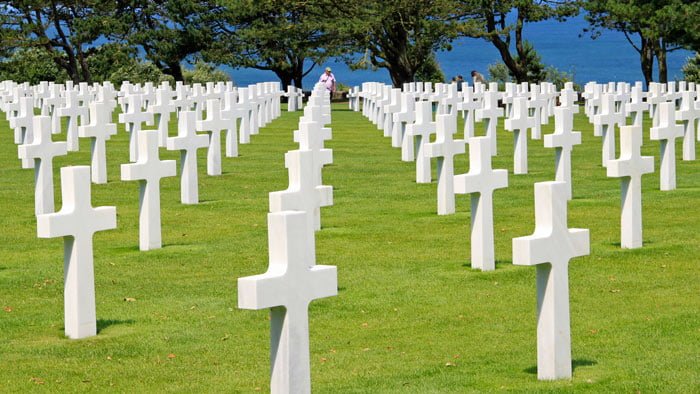 The Normandy American Cemetery and Memorial in Colleville-sur-Mer in France is with 9,387 graves the largest of the allied military cemeteries in Normandy. The memorial site overlooks Omaha landing beach where so many soldiers died on D-Day. The visitors’ center has a very interesting museum focusing on the US military during the Second World War with special emphasis on Operation Overlord and the Normandy campaign. Admission is free with the memorial open year round.

The American Military Cemetery at Colleville-sur-Mer 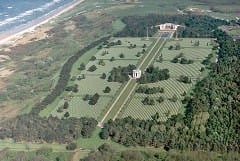 The military cemetery has the remains of 9,387 US soldiers. The graves are marked by 9,387 white marble headstones: 9,238 Latin crosses and 149 Stars of David. These are all perfectly aligned in 10 plots (A-I) with well-manicured lawns and paved paths. 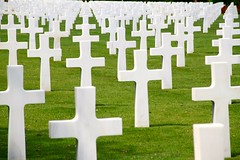 The US cemetery is the largest allied military cemetery in Normandy (four German cemeteries have more graves) and was the first Second World War American cemetery established on European soil. France granted the US free perpetual use of the terrain as a cemetery without charge or taxation. It is thus managed and maintained by the US federal government, more specifically the American Battlement Monument Commission (ABMC). 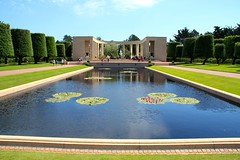 At the eastern end of the cemetery is a classical U-shaped memorial overlooking a reflecting pool and the rows of gravestones. At the center of the memorial is a huge 22-foot statue – “The Spirit of American Youth Rising from the Waves”.

Behind the memorial is the Garden of the Missing, where tablets bear the names of a further 1,557 soldiers missing in action. (A bronze rosette next to a name indicates that the remains has subsequently been recovered, identified, and buried. 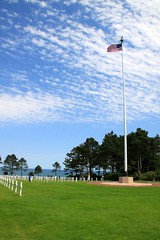 Amongst the graves marked by white marble headstones are: 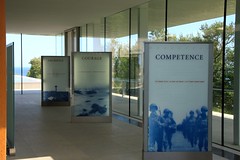 The Visitor Center has a small museum depicting the significance of Operation Overlord and the D-Day invasion. It focuses strongly on soldiers as individual humans and not simply overall battlefields and armies.

The main themes are competence, courage, and sacrifice. On display are not only battle plans but also many personal items belonging to various American soldiers and military support staff. A short movie currently tells the story of a few individuals who participated in D-Day and what happened to them, or their families, in later life. 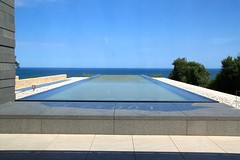 A visit to the American Cemetery at Colleville-sur-Mer above Omaha Beach can be surprisingly uplifting. The whole site is in great taste and honor the memory of the soldiers who sacrificed themselves saving Europe from tyranny.

Admission to the Visitor Center (museum) requires airport style security (but much friendlier and water bottles pass through with ease). Visitors not entering the museum can proceed directly to the graves and memorial park without these checks. 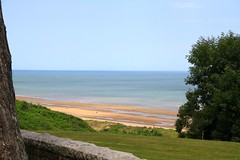 Surprisingly few visitors to the cemetery walk down to Omaha Beach, which is a pity, as from the beach it is much easier to appreciate the unsheltered terrain the US soldiers had to cross on D-Day. The ocean draws back far during low tide. 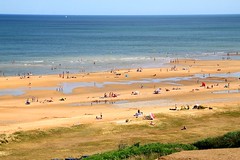 However, drivers may find it easier to reach Omaha Beach from the beach access through towns on either end of the cemetery. Sandy Omaha beach, as the other D-Day landing beaches in Normandy, are hugely popular with locals and tourists alike. At first glance, it seems a bit odd to holiday on a former battlefield where so many died but then again, it is their sacrifice that restored liberty to Europe.

Opening Hours of the Normandy American Cemetery and Memorial 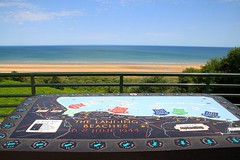 The Normandy American Cemetery and Memorial is open throughout the year but closed on December 25 and January 1 (and occasionally during budget standoffs).

The cemetery and memorial are open daily from 9 am to 5 pm (closing at 6 pm from mid-April to mid-September). Staff members are available at the visitor center to answer enquiries and accompany relatives to graves if necessary. The location of graves can also be checked online in advance at the ABMC website.

Toilet facilities and drinking fountains are available at the parking lot. Visitors to the museum may find the toilets in the basement less crowded on busy days.

Transportation to the Normandy American Cemetery and Memorial

The Normandy American Cemetery and Memorial is best reached by car or on minibus day trips. Public transportation is not available.

The military cemetery is just off the coastal road from Arromanches / Longues-sur-Mer / Bayeux towards Vierville-sur-Mer / Pointe du Hoc. Turn off at the new large Overlord Museum (with tanks on display next to the main road) – signposting is very clear. Ample free parking is available.

Food and drink is not available in the immediate vicinity of the cemetery. Note that restaurants nearby advertising fast service generally work from a French, not American, lunchtime perspective.