The Deutscher Soldatenfriedhof at La Cambe is the largest Second World War military cemetery in Normandy. 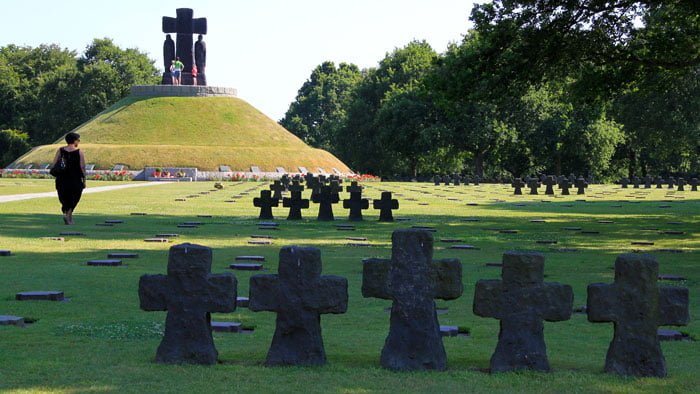 The Cimetière Militaire Allemand / Deutscher Soldatenfriedhof at La Cambe is the final resting place of over 21,000 German soldiers who died during the Battle of Normandy in 1944. The German military cemetery has by far the largest number of war graves in the region – more than double the number of graves in the nearby Normandy American Military Cemetery. Admission is free with the cemetery open to visitors year round.

The German Cemetery at La Cambe has the remains of 21,222 German soldiers who mostly died during the Battle of Normandy that followed the D-Day landing on June 6, 1944. 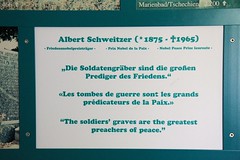 La Cambe was originally a battlefield graveyard with German and American war dead buried in adjacent fields. Shortly after the war, the remains of the American soldiers were repatriated to the US (around two-thirds of families preferred this option) or to the Normandy American Cemetery at Colleville-sur-Mer.

In 1948, La Cambe had around 8,000 German graves but in the following decade the remains of around 12,000 further German soldiers where moved here from 1,400 different locations in Normandy. At 7 ha, the German cemetery is only a tenth of the US site.

The German Cemetery at La Cambe 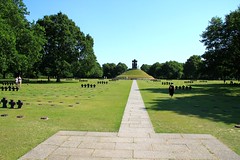 A paved path leads from the entrance of the German cemetery to a tumulus topped by two statues and a large basalt lava cross. The mount is a mass grave for 89 German soldiers and a further 207 unidentifiable bodies. Visitors may scale the mound and survey the cemetery from above.

Around the tumulus, 49 rectangular grave fields have up to 400 graves each. The graves are mostly marked with flat grave markers bearing the names of two soldiers and occasional series of five small basalt lava crosses grouped together. 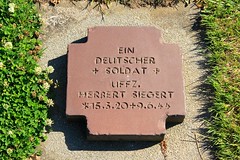 The cemetery is certainly respectful and generally well maintained, despite the German War Graves Commission being a volunteering rather than a government organization. However, it is a somber place.

The feeling of melancholy is not relieved by the visitors’ information center. Here, the focus is not on the wider war and battles but rather on the suffering of individual soldiers of both sides and the suffering of civilians trapped in the conflicts. 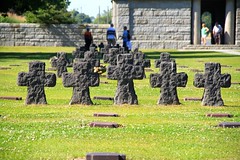 Here is no glorification of war. The emphasis is more on reconciliation. A Peace Garden outside the cemetery is planted with 1,200 maple trees and offers a walk of quiet contemplation, even if directly next to a busy road.

The contrast between the cemeteries at La Cambe and Colleville-sur-Mer couldn’t be bigger. Although both places are inherently sad, the American cemetery does leave visitors with a more positive spirit. The German cemetery is far more somber almost visualizing the futility of fighting and dying for an unjust and sick ideology.

The cemetery is best reached by car. Public transportation is not available.

The German cemetery and information center is open daily from 8 am (9 am on weekends) to 5 pm (winter) or 7 pm (summer).

The Deutcher Soldatenfriedhof is around 7 km inland from Pointe du Hoc or a fast 25 km on the N7 highway from Bayeux.

The second largest military cemetery in Normandy is the German Ossuary at Huisnes-sur-Mer near Mont St Michel.