The German war cemetery near Mont St Michel has the graves of 12,000 German soldiers who died during the Battle of Normandy in the Second World War. 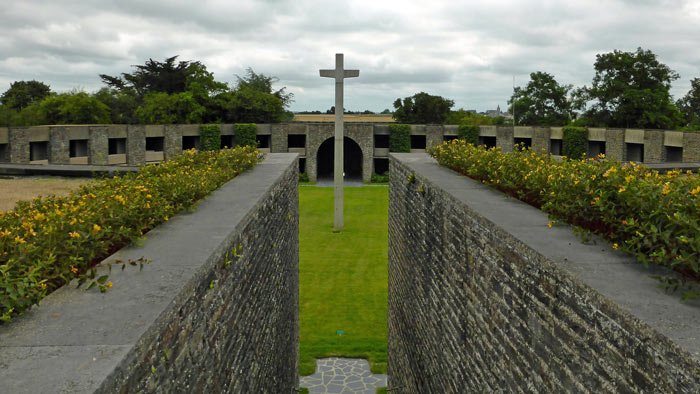 The German Ossuary at Huisnes-sur-Mer near the hugely popular UNESCO World Cultural Heritage listed site of Mont St Michel in Normandy, France, offers a reminder that thousands of German soldiers also died during the Battle of Normandy in 1944. The stark mausoleum highlights the horrors and price of war but with an almost surreally beautiful view of Mont St Michel.

The German Ossuary at Huisnes-sur-Mer in Normandy 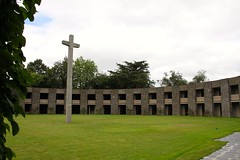 The German Ossuary at Huisnes-sur-Mer opened in 1963 on a 30-m high hill within sight of Mont St Michel. The bones of 11,956 German war dead were moved here after disinterments made at various places in the region, which saw heavy fighting in the summer of 1944 when the US forces finally broke out of Normandy at nearby Avranches. 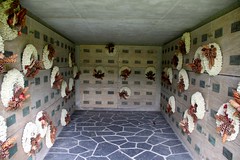 The mausoleum at Huisnes-sur-Mer is a circular double-story structure with 34 crypts on each level. Each crypt has the remains of up to 180 soldiers. If known, the names, dates of birth and death, and officer’s rank are inscribed on a bronze plaque. In addition to the 11,887 German soldiers buried here, the necropolis also has the remains of a few children and other German civilians who died as a direct consequence of the war. 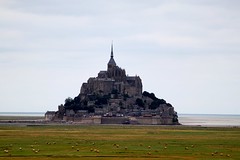 From the upper level, visitors also has a rather surreally peaceful view of Mont St Michel, which looks surprisingly near, as if floating on the typically flat polder landscape of the bay area.

In contrast to allied war cemeteries, the German ossuary is very stark and clearly belonging to the war’s loosing side. Even in Germany, where many small towns have memorials for soldiers who died during the First World War, very few have even a plague remembering those who died during the Second World War.

Visitors’ Information for the German Ossuary at Huisnes-sur-Mer 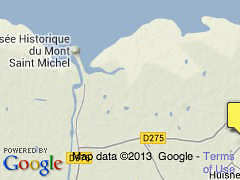 The German Ossuary is outside the small village Huisnes-sur-Mer. From the D275 that runs along the bay from Mont St Michel towards the D43 and Avranches, take the D107 – the signposting from here to the mausoleum is clear. The German Military Cemetery is referred to as Deutsche Kriegsgräberstätte in German and Cimetière militaire allemande in French. (Some maps, including Michelin, use Ossuaire allemande.) 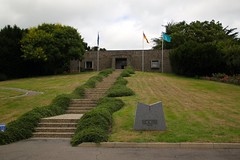 From a small parking lot, walk up a long flight of stairs, or use the longer level walkway for wheel chairs. A small information center at the entrance explains the creation of the ossuary, the events leading to its necessity and where to find specific graves. On display are a few letters (with translations) written by some of the soldiers who are buried here.

The German Ossuary is open daily. For most of the year, the cemetery is open from 8 am to 6 pm but in December, January, and February from 9 am to 4:30 pm.

Parking and admission is free. Public transportation is not available.

La Casserole de la Baie is small and unpretentious restaurant in nearby Huisnes-sur-Mer. It offers much better quality food and lower prices than the wealth of restaurants aimed at mass tourism nearer to Mont St Michel.