Getting to Schiphol Airport from Amsterdam is usually fastest by train but buses can be a good option too while airport shuttle vans go to downtown hotels. 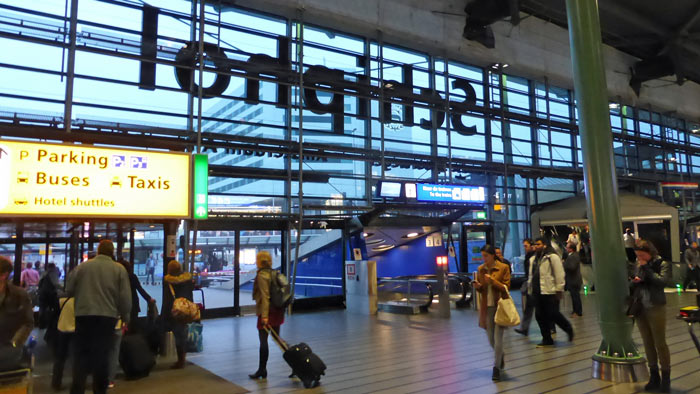 Schiphol Airport (AMS) is only 15 minutes by train from central Amsterdam but buses can also be a good and cheaper option for travelers heading to hotels and destinations to the south of the canal circle. Shared taxi services and airport shuttle minivan transit services are value for travelers with luggage or small groups and families traveling together. Taxis are fairly expensive given the short distances. Suntransfers give online quotations for private airport transfers without first requiring personal details or flight numbers.

By Train from Schiphol Airport to Amsterdam 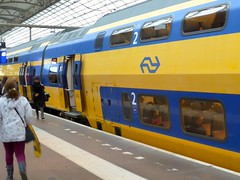 Trains are generally the recommended way of traveling between Schiphol Airport and downtown Amsterdam. Trains from Schiphol Airport depart from directly underneath the airport terminal building. From Amsterdam stations Centraal (central main station), Zuid (south), and RAI (congress and exhibition center), trams and buses provide transportation to all parts of the city.

For travelers heading to central Amsterdam, especially the historic old town area inside the canal section, it is usually best to head to the main train station – Centraal Station. Travelers to destinations to the south of the canal circle can often save time (and money) by taking the train from Schiphol Airport to Amsterdam Zuid or RAI stations before transferring to trams, buses, or the metro.

Travelers without an OV-Chipkaart, or one not activated for rail travel, can buy tickets at the yellow vending machines on the ground floor of the Airport Plaza terminal building. For cash purchases, queue up at the few remaining ticket windows. 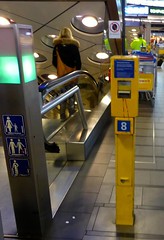 Train tickets bought at the vending machine must be validated before travel – push the ticket into the yellow box next to the escalators before going down to the platform. The machine will make a stamp noise and stamp the ticket. (OV-chipcards are touched against the more modern (and more prominent) electronic devices at the entrance to the escalators.)

The trains connecting Schiphol Airport and Amsterdam stations are regular trains and thus have no Airport Express or similar name. The price on this section is the same for all trains whether a fast Fyra train or a regular commuter. (Note that faster Fyra and some other high-speed trains require surcharges when traveling outside the Schiphol-Amsterdam boundaries.) 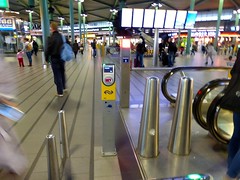 Use the 9292 Dutch public transportation travel site to find the best options – sometimes faster connections are available through even smaller stations but if the time difference is minimal, it is generally better to travel through Centraal or Zuid.

By Train from Schiphol to Amsterdam Centraal 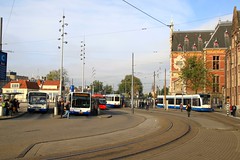 Direct trains connect Schiphol Airport and Amsterdam Centraal up to six times per hour. Traveling time depends on the number of stops and range from 14 to 19 minutes. Further services are available but require transfers – it is generally better to simply wait a few minutes for the next direct train rather than using a transfer that could lead to missing connections, finding another train, and schlepping luggage.

The current price for traveling by train from Schiphol Airport to Amsterdam Centraal station is €4.20 in Second Class and €7.10 in First Class. Children 4 to 11 pay €2.50 irrespective of class of travel. Day-return tickets are simply twice the single fare.

Trains between Schiphol Airport and Amsterdam run throughout the day. The frequency can be as high as six per hour falling to one per hour between 1 and 5 am.

By Train from Schiphol to Amsterdam Zuid & RAI 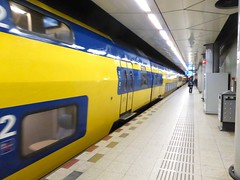 From Amsterdam Zuid, tram 5 provides an easy connection to Museumplein, Leidseplein and eventually Centraal Station. From Amsetrdam RAI, tram 4 connects to Amsterdam Centraal via the left bank of the Amstel River. Both Amsterdam Zuid and RAI are connected to the Metro system.

By Airport Express Bus 397 from Schiphol Airport to Amsterdam 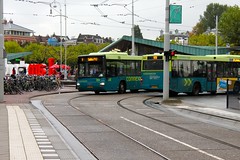 A large number of bus services are available from Schiphol Airport. However, only one is of significance to most travelers heading from Schiphol Airport to Amsterdam: Connexxion bus lijn 397, often referred to as the Airport Express. (The number changed from 197 in 2018!)

Connexxion bus 397 connects Schiphol with Amsterdam Elandsgracht around five times per hour (less frequently as bus N97 at night). The bus stops amongst others at Museumplein, Hobbemastraat (Rijksmuseum) and Leidseplein. Bus 397 stops several times at Schiphol – Airport / Plaza is the stop for the terminal building.

Traveling time from Schiphol to Leidseplein is around half an hour – although it is often slower than a train and tram combination, the time difference is not much and of course does not require transfers. The bus fare is €5 when bought from the driver – slightly cheaper for online purchases. The Amsterdam Travel Ticket transportation passes are valid.

Airport transfer shuttle vans offer a good alternative to regular public transportation from Schiphol Airport to Amsterdam for families, small groups, and travelers with bulky luggage. Advance reservations are usually a good idea and may be cheaper than booking at the airport on arrival. 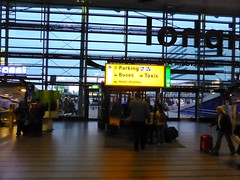 Several services are available. Regular taxis charge by the meter and could easily exceed €50 on any trip between Schiphol Airport and Amsterdam. Shuttle bus minivans is around €60-80 for a group.

Shared shuttle services can be much cheaper for individual travelers. Connexxion runs a Schiphol Hotel Shuttle service between the airport and almost any hotel in Amsterdam. The current fare is €16.50 (€26.50 return) for adults and €8 (€13 return) for children 4 to 14. The price falls for groups larger than three.

A Schiphol Travel Taxi can be booked in advance or at the airport – in such case the price is fixed and usually around €50 from Schiphol to destinations in central Amsterdam. Savings are possible by using a shared taxi – further travelers may be taken in the same vehicle but the detour, if any, may not exceed 1.5 times the direct traveling time. The savings can be more than half price for a solo traveler and around a third for two traveling together. For three traveling together, the saving for sharing is so small it is hardly worth considering as an alternative to a private transfer.

The train, tram and bus are the cheapest way to travel between Schiphol Airport and Amsterdam but shuttle vans are a good alternative when traveling in a group as family, or with luggage. Advance reservations are advisable and it is worth comparing the prices and conditions of several shuttle bus service providers.